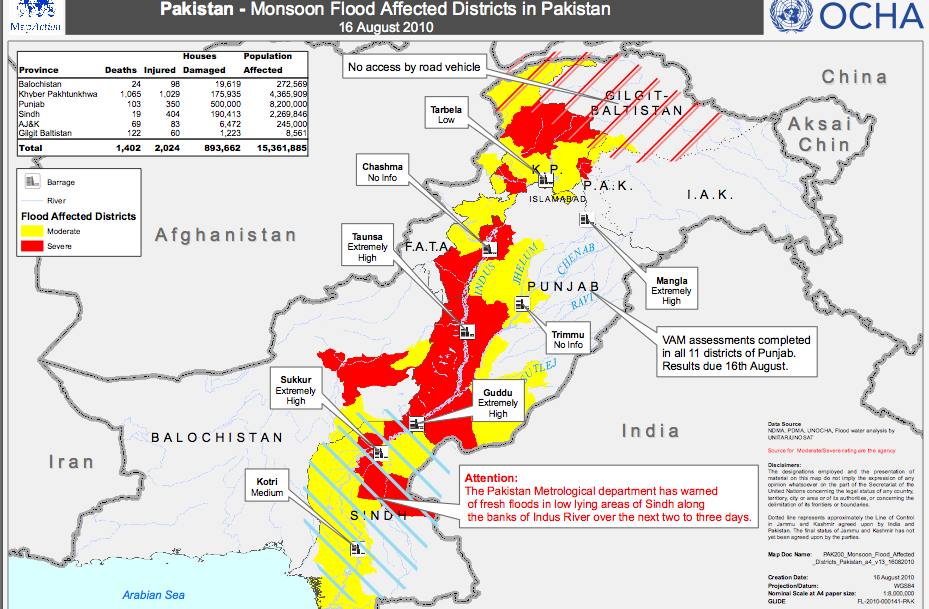 20 million people affected. To be "affected" means to somehow be in need of humanitarian assistance because of the flooding. As of Saturday the official death toll was 1,384, with 1,680 people reported as injured. Over 722,000 houses damaged or destroyed. 6 million people do not have access to clean water. 3.5 million children are at risk of contracting deadly water-born diseases, like diarrhea. [via]

[...] and nothing will ever be the same again. For more information on how to donate, please head over to Chapati Mystery or Changing Up [...]

It's okay guys, zardari has got this

on BBC America today, i briefly heard bits of an interview with a pakistani (i believe he was with the government or some organization). he said that pakistanis (as if he can speak for all pakistanis) don't want any western interference, and that includes any flood aid given (not that that would stop me from giving aid)

Nikolai: On that note, a few days ago I heard a Pakistani from Khyber-Pakhtunkhw aon a BBC podcast saying that in his village people now had positive impressions of the Americans because of all the aid they had been seeing in their area.

From my office in Hong Kong, I tried to send some aid. So I asked couple of my Chinese colleagues separately whether they know any Chinese aid group providing aid to Pakistan. One of them said, "where is the flood? in China?" I said, "China's friend, Pakistan, is devastated by massive flood and more than quarter of Pakistan is under water. So if we can arrange some aid through Chinese aid agency, that is great of Pakistan." This guy said he was not knowing that. But I felt that he really knew because couple of days back, he was browsing some sites in Chinese, which were not showing the floods in China. The other Chinese refused. Later, I found some other source and donated a little sum to Red Cross. Hope that amount will reach the needy people. Anyway, I was indeed appalled by the response from my Chinese colleagues. Later, I searched Google to find out the amount Chinese Govt provided. It was further disappointing. Richest country in the world having an asset of ~ $3 trillion dollars, paid less than $5 millions to its best friend! I can't imagine that. For China $10 millions or $50 millions aid is peanut. I know it is not the time to talk about this to a Pakistani. But I guess, one Pakistani should realize this. Jack

this is a big disaster in Pak...govenment needs to something..but they diesnt even care abt all the people who have lost their houses, jobs, families, and everythign in the flood...even they are not gettin the funds and donations from other countris... wat is this bullshit governemt doin???just sittin n watchin around...yeah..they are just sitting..damnnnn...y they dont think that 1 day this can happen to them too...no...they forget that they have to answers this in doomsday...GOD...... plz we need a honest president....we need it badly...we dont need zardari..pakistan dont deserve him...... he is a bitch person i've ever seen........