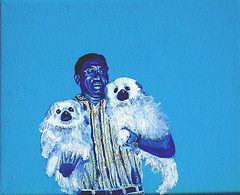 Q Dana, does the White House believe that Musharraf is now a dictator?
MS. PERINO: Look, I think that that is -- it's premature to say that. This is a President -- ...

The glorious founding fathers of this nation really did us a bad. They kicked out the King, banned all pomp and circumstance, and made us seek manifestations of our glory in bald eagles and giant cracked bells. Political Power, that most pompous and most glorious of all sports, became the dominion of dour grey suits, subdued hair cuts and sober visages (despite some recent divergances, aside).

What to do, then, about our yearning desires to see the bright plumage of our ruling kings and queens? How do we fill our fantasies of unilateral and benevolent power personified? If we are God's own nation and this is the City on the Hill and that is our Manifest Destiny then where, oh where, can we observe righteous Leadership in action? Sure we can transpose some of those desires to the celebrities and give Oscars to anyone who makes any movie about the British queens - dead or dying. But ... it just doesn't cut it, you know?

Hence, we outsource our plumage-needs. There are many a people who have the ability to produce a variety of genus homo dictatorus - with a little support and guidance from us. This species comes with their own funny hats, chests filled with medals and bars, a posse of killing hardware, and a determination to "put things right". We like that. We support their nascent abilities to lead their people. We put their glamorous, glittering visages on our papers and our screens - hungrily following them from "crisis" to "crisis". There is so much more substance in their turbulent lives than in our Lindsey Lohan, after all. Now and then, we remind ourselves that our support for these dictators is not "permanent" and that one day soon, they should bring "democracy" to their people.

But, come on. We are smart people here. We know how it is. Democracy is _way_WAY_ complicated. Electoral colleges, and votes and quorums and, oh, those hanging chads! We know that these people have no idea how to successfully keep the poor from clogging up the mainstream with their opinions or even how a black-robed junta can strike an election towards the candidate who lost. Those are skills that take centuries to learn. Still, we ask of these inveterate performers to keep an eye on the road ahead - to tell us that you are working very, very hard in training the people in democracy. We ask them to believe that freedom is the birthright of every human on this planet. They have the freedom to enslave their people. We have the freedom to fund that march for freedom.

To those among us, dour on the inside and out, who make loud pronouncements about repression and oppression and all that. Please. This is a completely harmless species. They bark. But they do not bite. And they are necessary. For their people. And also, for us. 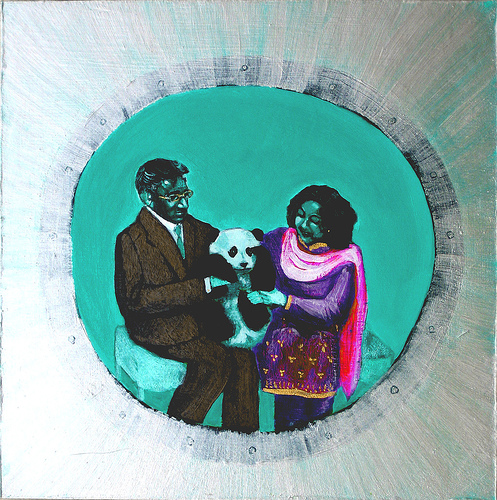 Dead on. There are parallels with the romanticisation of rajas during the Raj - much as the Brits prided themselves on lifting India out of its oriental despotism (ditto the French in parts of N. Africa) they did still seem to get a guilty pleasure out of court grandeur, and posing for pictures with fat jewel-draped princelings.

[...] the plumage and pageantry do help. You can always justify your devotion to a cad by saying that you can’t [...]

if there is a ban on"assembly" that doesn't necessarily exclude collective protest on a massive level. if people gather to protest they create an easy target for the oppressive police. would it be possible to have aprotest which is capillary: dispersed throughout the territory and society? could all interested protester and concerned citizens just stop what their doing at a specific time: say 11:30 am on monday, and step into the street blocking traffic, wherever they happen to be? the police can't be everywhere, all the time. and such a move would stop the country dead in its tracks for a long while due to ensuing logistical problems and also send a stong message to the govenment: the same one which Ms Bhutto said: "they can't arreste everyone" especially if they aren't all in the same place. and that the country can shut the military down, even without having means or money or arms. in the wake of a media blackout and oppressive military force, one could imagine taking advantage of alternative ways of thinking: exactly what the military is incaple of.