[Sarover Zaidi is an anthropologist, obsessing on architecture, art and other modes of being. Besides she runs 'Elementary forms and the city' and an itinerant future Guild for those who stand between the academy and the street. She has previously studied philosophy, worked in rural public health, loved and left Berlin, and worked in a bank.

The author would like to thank Samprati Pani for editorial and other lifeline inputs.

A version of this article first appeared in the Critical Collective http://www.criticalcollective.in - an online art and art history magazine from India.]

Dedicated to the memory of my father, who died February 2017, my eternal witness. 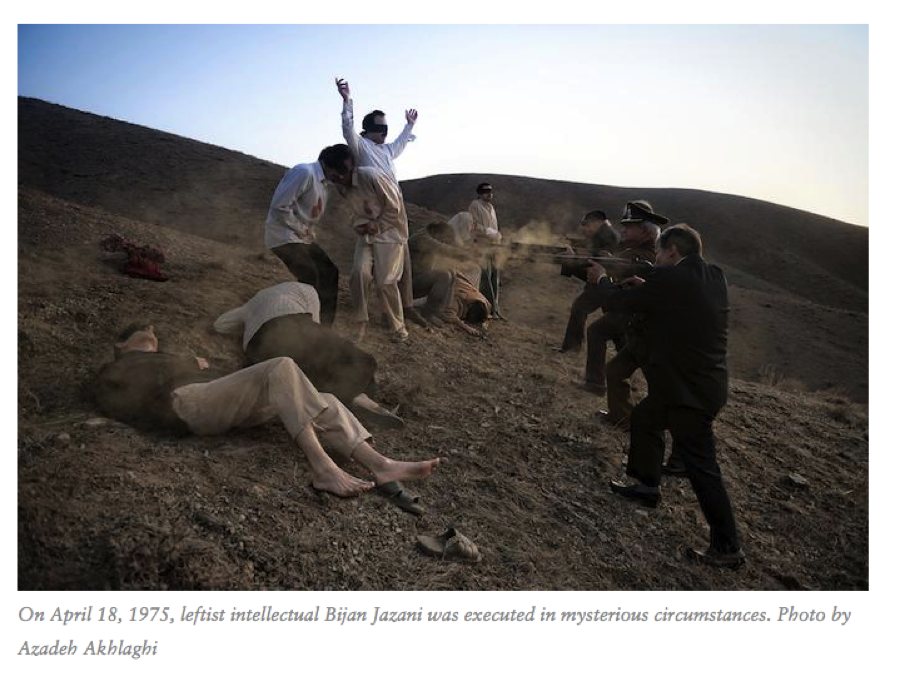 They ask me to tell them what Shahid meansâ€”

Listen: It means “The Beloved” in Persian, “Witness” in Arabic

Ali Shariati, the Iranian revolutionary and socialist, died mysteriously in 1977. Shariati, also a sociologist, wrote Jihad and Shahadat, a rendering of the historico-mythical battle of Karbala, retelling it as the first red revolution. Composed as a testimonial to the dead, Shariati portrayed the female protagonist Zainab as the last witness to this bloody battle of loss, death and mourning. Unfortunately, at the peak of Cold War politics, prior to Khomeini's rise to power in Iran (1979), Shariati had been found dead under mysterious circumstances (1977). Shariati's own death went without witnesses or testimonials, or the image and space of mourning it demanded. Forty years later, Azadeh Akhlaghi, a photographer, provides a testimonial to Shariati's death, in her experimental series 'By an Eyewitness'. 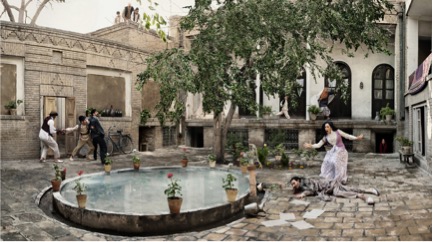 Akhlaghi works with 17 renditions of witnessing deaths and events that had slid under the archives or had not been allowed to have one. She provides in the hyper-image-fetishizing code of contemporary photography, an original injunction. Akhlaghi's exhibit works with actors and staged sets to produce events that had missed photographic documentation and presence in the archive of a nation-state. Using newspaper reports, records and interviews, she, bit by bit, pieces together scenes of assassinations, accidents, political deaths and funerals. She seamlessly, brilliantly, and self-consciously provides the role of the fabricator in photography, but one that hinges on photography's original injunction, that of providing evidence, by staging 17 unaccounted for deaths in Iranian history. 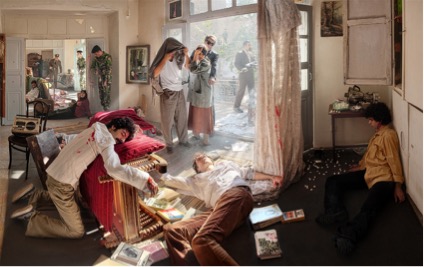 From Forough Farrokhzad to the December 7 student protests of 1953, to the unseen assassinations of Shariati, Jazani and Yazdi, all are accounted for in her work. She bears witness to that which had not been looked at or had been erased. Cleverly breaking the asymmetry of the photographer and the photograph, Azadeh also places herself in these staged photographs, providing us with an interesting rupture in the photographic interventions of our century, where the photographer is always outside the photograph, as an objective note taker. The viewer of the event is part of the event and the photograph, providing us new locations of viewing and a new ethical form of the photograph in relation to the photographer. In high surveillance states, the archive is made by the surveyor, erasing much of that the state does not wish to see or hear repeated. Azadeh's work is seminal for letting history bear witness again. Her photographs, working both as events and evidence, provide an injunction of bearing witness, of providing evidence and of a claim to a truth, which had not been spoken for. 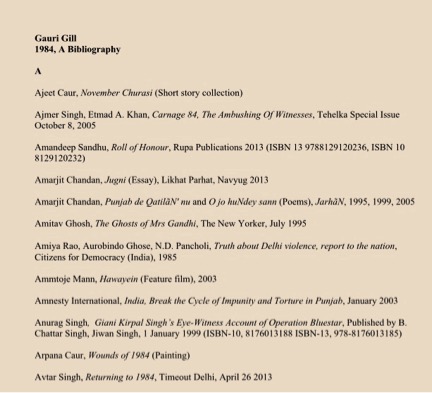 Gauri Gill's project titled '1984: A Bibliography' marks a different kind of intervention into the archive. Gill, a photographer, who had earlier worked with photographs and texts to archive the memory of the anti-Sikh pogrom and its consequent legislative inquiries, here chooses an alternative format. She decides to mark an interruption, not through the photographic format but by listing out a bibliography. This tediously constructed document lists notes, enquires, thoughts and fiction from fields as diverse as arts, academia and photography. The 'Bibliography' aims to provide an open-ended archive that had not been assembled in the first instance. The anti-Sikh pogrom of Delhi took place in 1984, after the assassination of the then prime minister of India, Indira Gandhi. Rioters and even state-sponsored teams of men attacked Sikh households and Sikh settlements in Delhi, killing and burning many. Various reports claim that more than 3,000 people were killed and about 400 cases filed, of which the police closed 241 cases dues to lack of evidence. The event has not only been systematically made invisible to a legal or public archive, with cursory mention in school textbooks or public commemorations, it is also only very remotely available to public memory.

Gill's 'Bibliography' functions as a testimonial towards this silencing of the 1984 events. Working forward from her earlier intervention of 'a Notebook' on 1984, which used photographs and texts, the 'Bibliography' provides a different technique of rendering her work in the public sphere. This annotation forms her intervention and provides a new politics of thinking and working with aspects of a history of violence in India. It is fantastical how she makes a taxonomical exercise operate as a work of political art. By setting up the 'Bibliography', which is continuously updated, she provides for 1984 an archive, infinitely open and constantly annotated with new testimonials on the event.

Both photographers use the medium of art to provide the location of 'bearing witness', much like Agamben's reading of Primo Levi's literature on Auschwitz, where he explains that bearing witness involves a difficult task and is much more tougher for the survivor than the martyred. Their art functions as an attempt to provide a motley of words, sometimes coherent, sometimes nonsensical, sometimes whispered, or hidden, or as a murmur of meanings, sometimes visions, sometimes marks of bodies without words, or even words without bodies, sometimes taxonomies, and sometimes fabrications. The survivor not only bears witness and gives testimony for those who can no longer speak, but in being heard, the survivor is borne witness to by the world. Azadeh and Gill come to bear witness on behalf of those who have receded in the murmur and in memory by providing new archives for their survival.

By An Eye Witness is part of Art Heritage's show “'Staging the Past'— An Exhibition of Photographs by Azadeh Akhlaghi and Babak Kazemi”, October 12 — November 14, at the Shridharani Gallery, Triveni Kala Sangam, New Delhi.

Gauri Gill's work was part of INSERT 2014, and is a work in progress. They were first set out publicly by RAQS Media Collective's curated show at the IGNCA, Delhi.