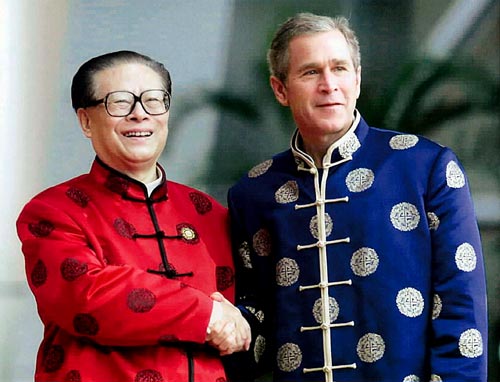 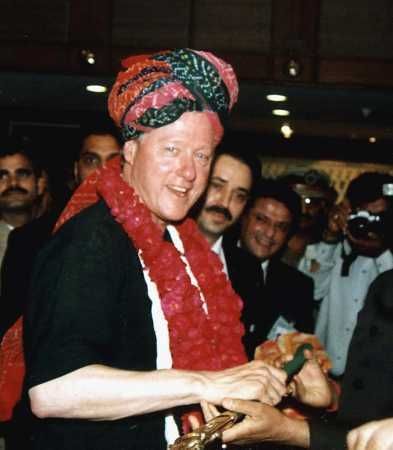 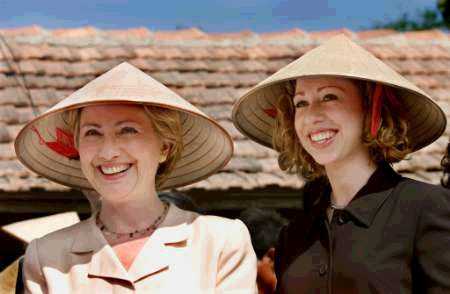 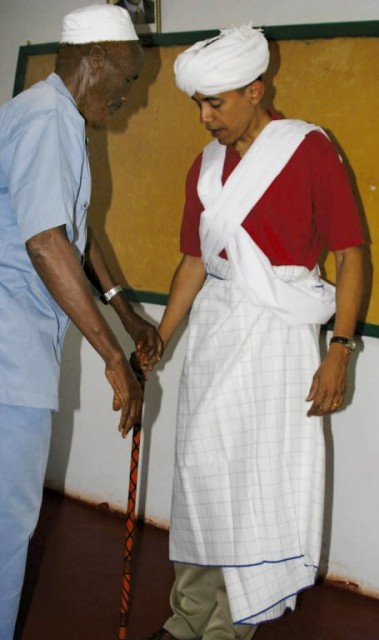 A photograph circulating in the Internet of Democratic Sen. Barack Obama dressed in traditional local garments during a visit to Kenya in 2006 is causing a dustup in the presidential campaign over what constitutes a smear.

The Associated Press photograph portrays Obama wearing a white turban and a wraparound white robe presented to him by elders in Wajir, in northeastern Kenya. Obama's estranged late father was Kenyan and Obama visited the country in 2006, attracting thousands of well-wishers.

The gossip and news Web site The Drudge Report posted the photograph Monday and said it was being circulated by "Clinton staffers" and quoted an e-mail from an unidentified campaign aide. Drudge did not include proof of the e-mail in the report....

Ah, the joys of our enlightened, thoroughly modern society...Obama has no substance, 'tis true, but he does have lots of 'color' and he does like the Moslems and he hates the Jews. Yeah. Bring on the substantive debates...

You left out my favorite.

while talking about superficial and frivilous, might take a detour from reality through the color of their costumes and skin to the color of their eyes(US Presidents) http://michaelmedved.townhall.com/blog/g/6a8aac43-a680-4370-995e-ddebd808430e

I can't believe I clicked through.... ugh. (and I mean that in the most professional historical sense of the word.)

I don't understand why anyone should even feel compelled to defend himself on the charge of being a Muslim, if 'charge' is even the appropriate term (I don't think it is), as Obama has been made to feel he should. Surely defending yourself implies that it's something negative? I guess I can't fault him for wanting to clarify the truth but if so many people weren't so backward anyway it wouldn't make a difference. I don't care what he believes in as long as he's better than the monkey we've currently got masquerading as a president. That anyone would hope to benefit from the bigoted notions of others is truly sad but in no way surprising. Time to get back to those 'real issue' thingys now...

I think the Clinton Campaign had a pretty good response. he accusation was dismissed by Mrs Clinton's campaign manager Maggie Williams. "If Barack Obama's campaign wants to suggest that a photo of him wearing traditional Somali clothing is divisive, they should be ashamed," she said. "Hillary Clinton has worn the traditional clothing of countries she has visited and had those photos published widely." Evidence above Also Laura Bush in a headscarf http://farm3.static.flickr.com/2118/1744437066_7a9536cb1e.jpg

I don't understand why anyone should even feel compelled to defend himself on the charge of being a Muslim, the "charge" (and it is an accusation, mind you) isn't simply that he's a Muslim -- though there's plenty of folks out there who would consider that a strike against him, too -- but that he's a crypto-Muslim, a wolf in UCC clothing, that his Muslim "blood" is a taint that even thirty years of Christian worship can't really clear (especially those liberal Christians, who aren't really all that Christian, if you get my meaning)..... Oh, what's the use?

[...] to this despicable racism on a blog with the unlikely title, “Chapati Mystery.” Click on this link for pictures of George W. Bush in a Chinese jacket, Bill Clinton in a turban and ... The Obama picture is there as well. You may even want to bookmark it; no doubt, we’ll need it [...]

Can I just state, for the record, that I really, really want that jacket Bush is wearing? I would wear it every day to class.

Beat me to the punch! Well, I dibs the hat that Bill is wearing, though the wreath of flowers looks like honolulu airport quality. What are they handing him, some kind of scimitar or something?

Photomontage for the win!

Well if we're all making a grab for it, I *need* one of those hats Hill and Chelsea are sporting.

Obama looks quite handsome like that. Though not the same dress, it reminds me of the Tuareg men who I think are really hot.

I like the longer tunics that Bush and Putin are wearing, myself.

[...] Sepoy at Chapati Mystery proved me wrong. He’s got a picture of Hillary and Chelsea matching matching. Posted by [...]

“If Barack Obama's campaign wants to suggest that a photo of him wearing traditional Somali clothing is divisive, they should be ashamed,” she said. “Hillary Clinton has worn the traditional clothing of countries she has visited and had those photos published widely.”

Well, all those pictured above are good sports, unlike Jaques Chirac at the G8 meeting in Alberta, Canada where he was the only leader who refused to wear the cowboy hat. Clinton tossed his on with a grin and winked at the media. I suppose being pictured in a cowboy hat in some French tabloid was on Chirac's mind?