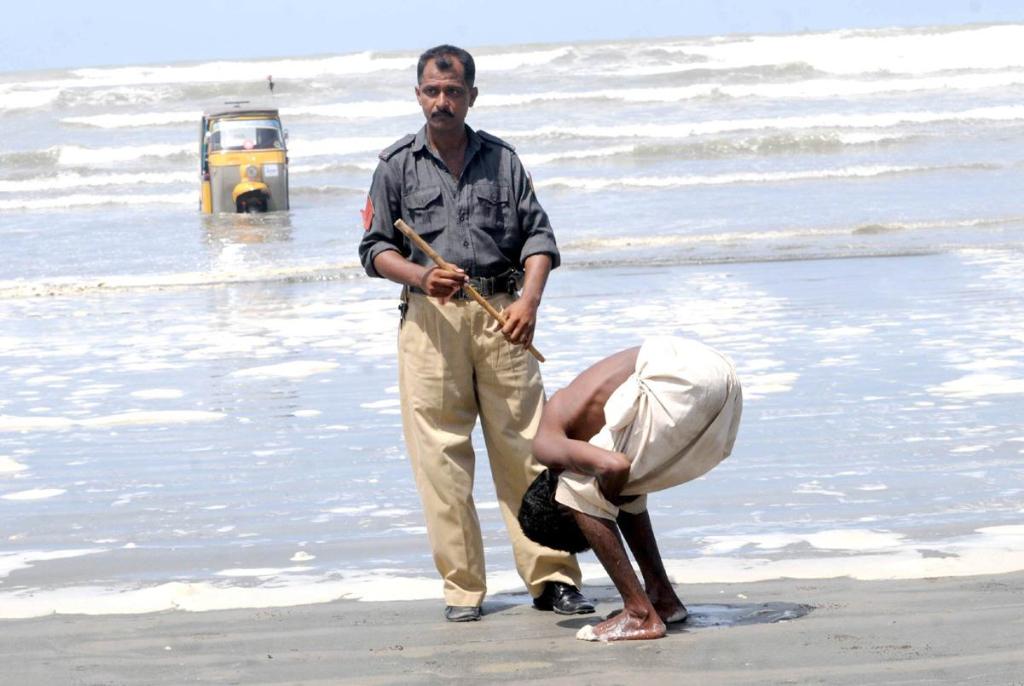 *The punishment is called "Murgha bana na" (to make one into a rooster). One is to grab the ears from behind the legs (not like this). Uncomfortable! And quite popular in schools across South Asia as well as in other settings. The gentleman above, holding the Murgha pose, was washing his rickshaw in the surf as the cyclone Phet approached and people were ordered away from the beaches. This is the best photo, representing a bygone age, that I have seen. A policeman with a lathi and not a klashnikov. Sigh.

By gone era? Isn't this what Americans like to call a "stress position"...

Vikash, please don't give them any new ideas.

Wait, I thought he was being punished for not moving away from the beach as the cyclone approached. then why is this punishment taking place on...the beach? And his poor rickshaw...!

This was a punishment meted out by the pious imams in the after school Qur'an classes we attended.

Saadia has it right. But that's if he really is the rickshaw-wallah. His physique, attire and general obsequiousness suggests he might not be. No rickshaw wallah will become a murga just like that, not when he knows he can feed the tulla his rishwat and get away. Plus nobody washes their rickshaw in the sea surf, leave alone in the wake of a cyclone.

Bygone era? Don't think so, as the photo shows. You cannot write time away so easily and send it into history so soon. 1. Cyclone Phet is so ' just yesterday'. 2. Murgha pose is still being imposed. How shameful and derogatory it is to make someone go through this as punishment. The comment by another reader about the small girl, omigod. I hate this. Don't know what other tortures she may have undergone . Good photo, unusual, the whole picture, especially as it makes one think.

Rani Narayanan - "Years back my neighbor, a girl aged 16 who was married to a man aged 40, (Biharis) ran into her house when she saw him coming home at a distance. She didn't know other languages except Hindi and Bihari; I then didn't know either. My another friend was actually translating me this. On running into the house she said, if he found her talking to us he would say "murghi ban" I couldn't imagine what it was. Seeing this I now feel so bad, that the girl should not have gone through this punishment from the old husband!!!!!!. :(Jun 7)" Sorry, this was the comment. It was on my buzz page, I came to this site through a link.