If you have watched the monsoon rain come and go, you know something about the subcontinent. Kalidasa’s Meghadūta (Cloud Messenger), from 5 CE, is already little more than a long list of things he would have known: the contours of a journey from Ramagiri to Mount Kailāsa, the pain of separation, the trees, the flowers, the markets, the temples, the rivers, the mountains, the cities, the dwellings. Kalidasa’s cloud, bearing a message, moved both because it is at the mercy of winds, and sighs, but also because it carries a message. The cloud–just vapor, light, water and wind–was also anxious, eager, distracted, seducer. So Kalidasa would have known movement itself. One imagines, so would his readers, his listeners, the many who composed similar ‘messenger’ poems before and after Kalidasa.

Movement defines something concrete about the subcontinent. It is everywhere. Didn’t Siddhartha Gautama move to escape his life of princely woes? Didn’t Ram? Didn’t the protagonists of Candayan, of Yusuf Zulaikha, of Miragavati, of literally hundreds of Sanskrit, Persian, Marathi, Deccani, Bangla, Punjabi romances? I say this not to make an essentialist argument about our people, but to merely point that we may need a history of movement before too long.

I began thinking about movement because of Guru Nanak. He was born in 1469 in Talwandi Rai Bhoi (now Nankana Sahib), roughly 70 km west of Lahore, Punjab. His father, Kalu Bedi, and mother, Tripata, were childless, they say. In the janamsakhi–the various collections of stories of the life of Nanak–there is an originary movement: the journey Tripata took to ask for a child. The first-born was Nanaki and the second was Nanak.

The life of Nanak is movement, as captured in the various janamsakhi (composed around 1604, the earliest surviving is 1658). He moves to Sultanpur to begin working as an accountant. It was at Sultanpur that he hears first the voice of Akal Purakh (timeless one) to move away from the worldly affairs of book-keeping and towards the search for Truth.

After the fourth udāsī, having covered the four cardinal directions, having visited the main seats of political power in the world, and the centers of all major religions, Guru Nanak settled with his family and followers in Kartarpur, a mere 150 km from Talwandi. He died there in 1538. I like that his journeys are called udāsī in the tradition–literally the sorrows, one imagines, of parting.

The great Guru is one among many world-walkers of the subcontinent. Farid Ganjshakar (1179-1266), buried in Pakpattan some 270 km south from Kartarpur, walked to Baghdad, Jerusalem, Mecca, Ghazni. Makhdoom Jahaniyan Jahangasht (1308-1384), buried in Uch Sharif some 540 km south of Kartarpur, went to Mecca, Rome, China, around the world. There were also walkers, who moved within the subcontinent–like Dnyaneshwar (1275-1296), Lal Ded (1320-1392) and contemporaries of the Guru, Chaitanya (1486-1533), Mirabai (1499-1570), Dadu Dayal (1544-1603); most importantly, Kabir (1440-1518) and Surdas (1478-1581). Nanak moves in their world as they all had moved in his. He meets Baba Farid and Kabir–their verses are included the Guru Granth Sahib alongside those of Namdev, and Ravidas. All the movers have in common the fact of moving, but also of seeking. If one thinks of Nanak alongside his Hindustani contemporaries, this movement seems almost prosaic. But try imagining him next to his contemporaries outside Hindustan, such as Martin Luther (1483-1546) and Erasmus (1466-1536), and the contrast in world-making will come into sharp relief.

What did Nanak do while moving? Was he carrying a message like Kalidasa’s cloud? Not so much. Instead, he was learning, debating, talking, thinking. He was composing his verses. In the Adi Sri Guru Granth Sahibji are 31 raag compositions of Nanak and the next four gurus. Though compiled between 1603-04, these verses speak to the philosophy and sacrality of Nanak, and what would emerge as Sikhi. Nanak’s verses are in Punjabi, the language for where he was born and where he died. The world-walker spoke in his mother-tongue to his followers.

Punjab is shaped by Lahore, by Multan, by Sialkot, by the flow of the five rivers (Jhelum, Chenab, Ravi, Sutlej and Beas) as they rush helter-skelter across wide plains to merge with the Indus. To the five rivers, belong the five masters, panj pirs: Khwaja Khizr, Baba Farid, Shaikh Bahauddin Zakariyya of Multan, Makdum Jahaniyan Jahangusht of Uch, and Lal Shahbaz Qalandar of Sehwan. They are all itinerant–traversing both space and time. They can visit you, if you ask with a pure heart, and bring you the message that you seek. If you walk around Pakpattan, Uch Sharif, as I have, you will see a poster or two in every shop, in most public places, affixed to any means of transportation, heralding these Sufi masters.

However, the partitioning of Punjab in 1947 has made Nanak a stranger to his own land. In December 2019, I visited Kartarpur which is now a “visa free corridor” between India and Pakistan. 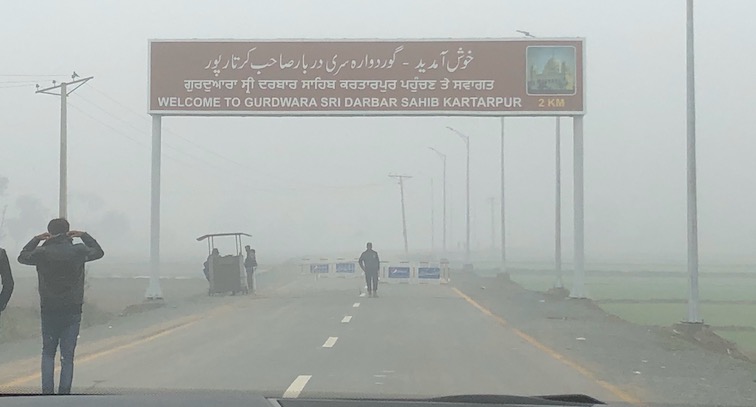 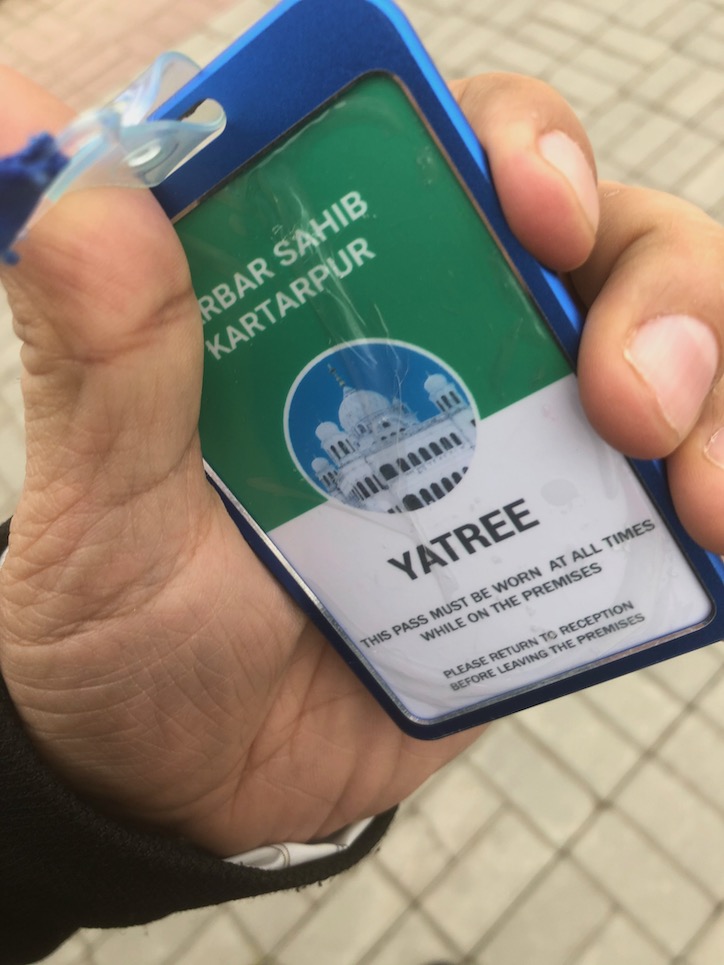 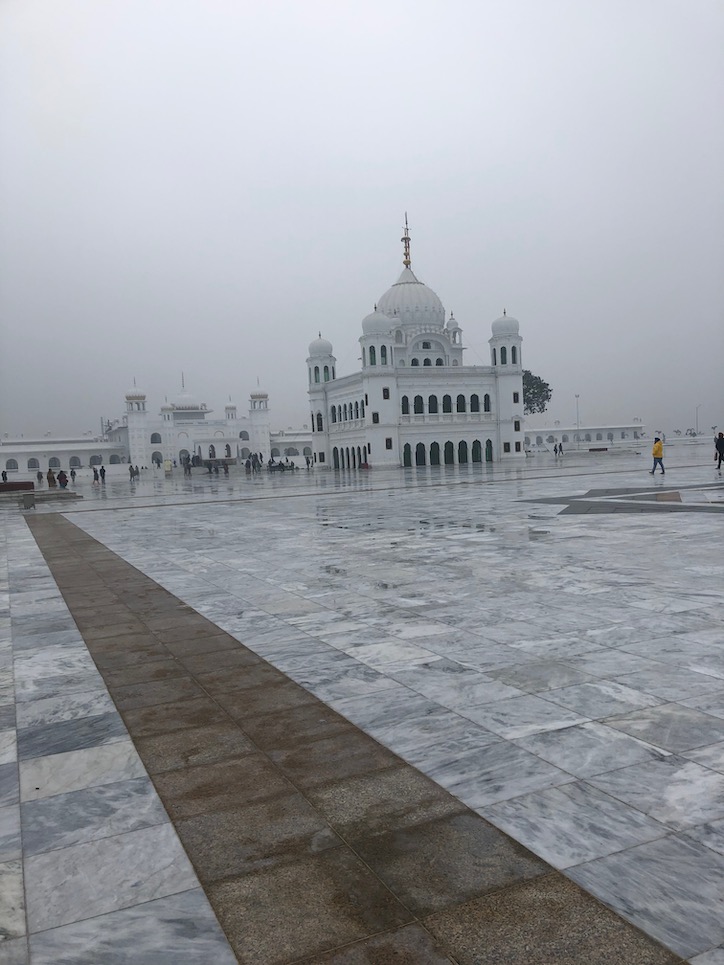 In December, I heard about grand plans, of hotels, hostels, shops that will cater to the rich Sikh pilgrims who can now visit the last resting place of Guru Nanak. Since 1947, they have been viewing through a mounted telescope on the Indian border, a small darshan. Now they can board a fancy bus, and come to explore and pay their respects. 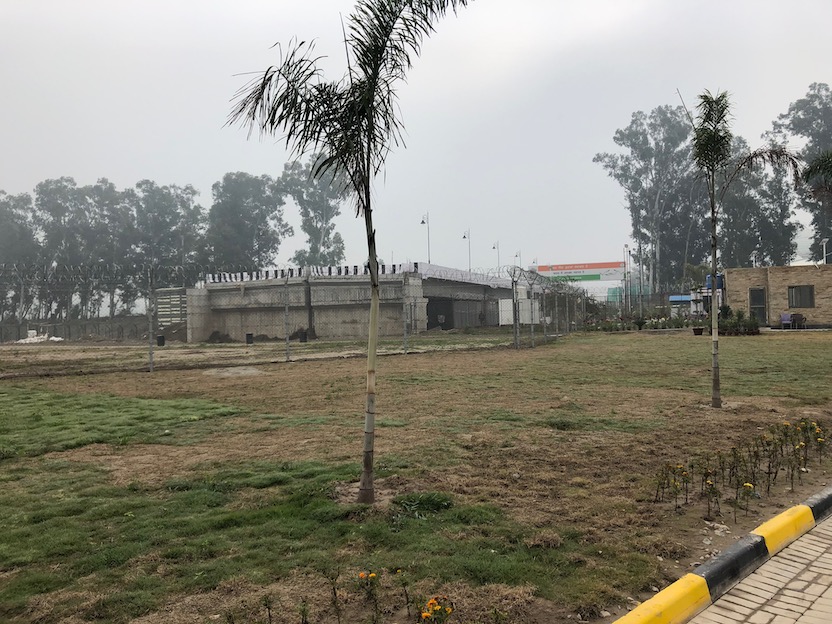 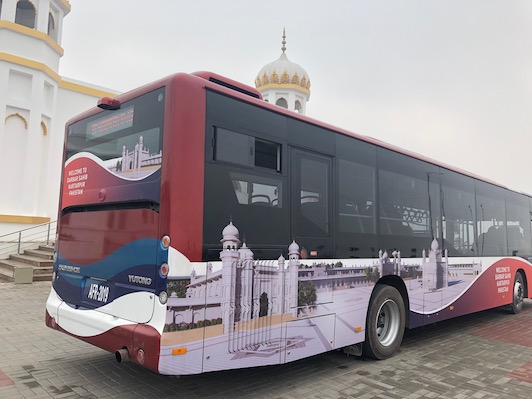 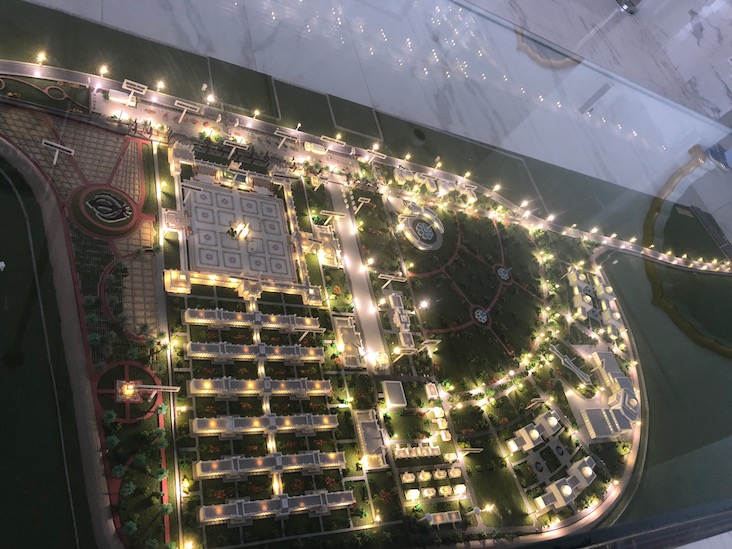 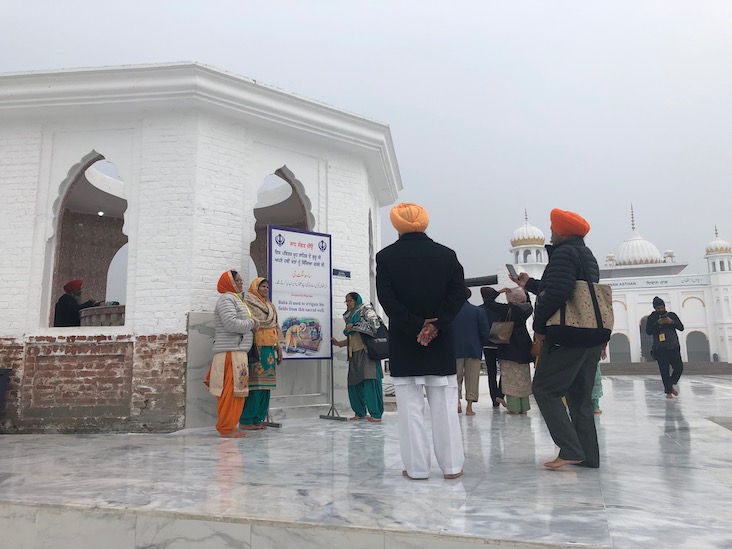 The marble ensconced multiplex is nothing like the structure I visited some time ago. It looked something like this: 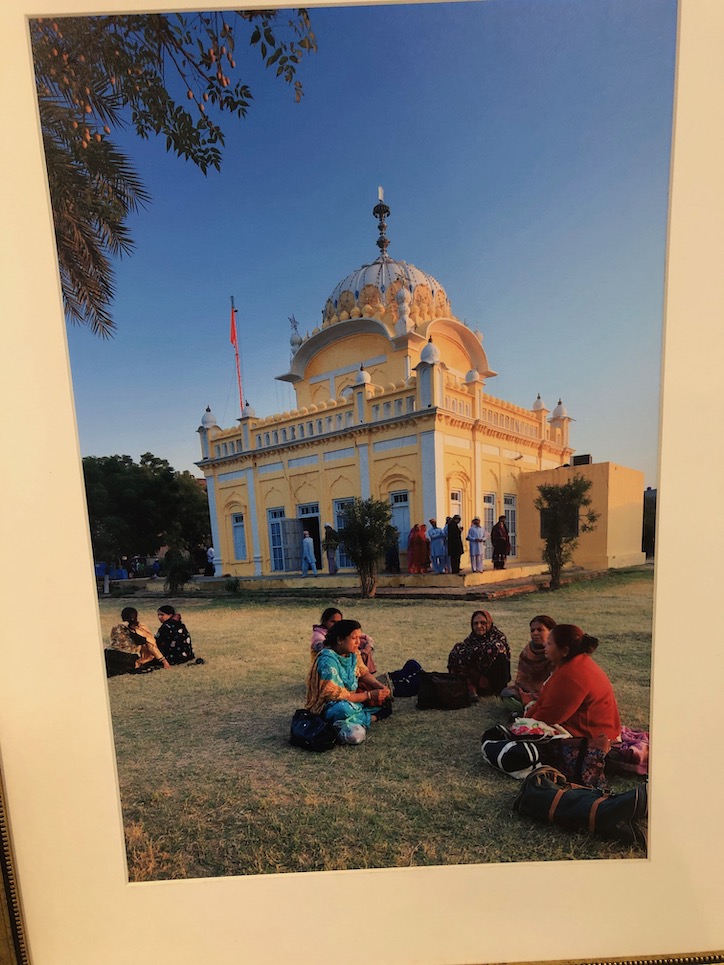 Kartarpur was sparsely populated, nearly impossible to reach, when I visited in the late 1980s. Now it is a monument to Pakistani entrepreneurial spirit. There were classes from nearby villages, and a few visitors from India. The Pakistanis wore green and the Indians wore saffron. No one really spoke to each other. There was a freedom of movement that I would not be able to imagine in South Asia. There was a library with a seminar room and I wished that I could hold a conference on its premises. What a moving experience would it be to bring Indian historians to Kartarpur, visa free, and have a gathering on the meaning of Nanak and his history.

After my return, I kept thinking about Nanak, the usage of his memory by the Pakistani state, the mobility of Sikh pilgrims, the concessions of partitioned spaces to the allure of Capital. During my visit, I asked a few of the young students if they knew who Guru Nanak was, and how he was a Punjabi like they were. No one seemed to know him.

It was the historical memory of Nanak, that took me to Haroon Khalid’s engaging and thoughtful book, Walking with Nanak. Khalid is able to contextualize Nanak’s memory, and the material remains of the Gurdwaras associated with Nanak. He shows the destructive impulses of the partitioned logic–from reclaiming land, erasing and hiding structures, building massive mosques next to them, scribbling Allah-o Akbar graffiti–that deliberately erased Nanak from his own world. I think anyone wondering what processes of cultural erasure look like on the ground would have no finer guide than this book for Pakistan. Khalid is a sensitive guide to the reader. He is himself seeking Nanak. I appreciated most how he framed his own awareness of Nanak’s message and where he confronts his (and his social milieu’s) discomfort with proximal difference. 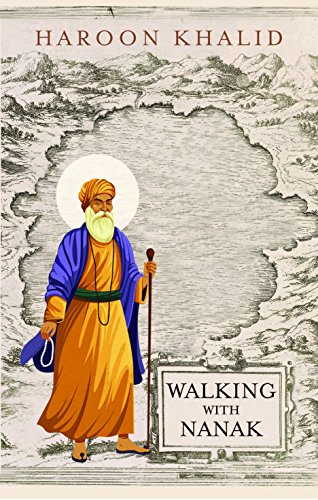 In 1989, I went to Nankana Sahib and Kartarpur, on the way back from Hassan Abdal. At the time, I was very much in my Bulleh Shah, Waris Shah phase and very curious about Guru Nanak. At the age of sixteen, a well-meaning teacher had handed me his copy of Hermann Hesse’s Siddhartha in order to broaden my mind (and presumably my English vocabulary). I found it to be a terribly difficult read, and hard to understand, but I was very pleased that this professor had granted me this book of secrets. Around the same time, I was reading Qurratulain Hyder’s Aag ka darya (River of Fire). I kept alternating between the two, often confused by which character was where–there was a Siddharth, a Gautam, a Kamala, a river in both–and what I was meant to be understanding about the nature of self. I eventually gave up on Hesse for the Urdu novel.

The fascination with movement gripped me. Bulleh Shah (1680-1757) roamed Punjab. Waris Shah (1722-1798) roamed Punjab. Mian Muhammad Baksh (1830-1907) roamed Punjab. I was reading the Hir, Saif ul Malook, Tilsim-i Hoshruba which were all tales of movement. Most of them had male protagonists and most were stories of adventure even if they claimed gnostic status about higher truths. I met other travelers–some men, mostly women. There was a wide circuit of seekers of solace, of cure, of happiness, of progeny. I was too young to understand any of it.

Much later, when I was doing fieldwork in Sindh, I met women in Sehwan and in Bhakkar who explained what movement meant for them. Their movements, like the originary movement of Tripata, was an extension of their homes into the world. They carried their sorrows, their trials and tribulations, with them. The saints, men and women, were their only hope. Unlike the men, the women healers and seekers didn’t traverse the four cardinal points on the compass. Their itinerary was between the house of birth, the house of marriage, the house of the male child, and the shrine.