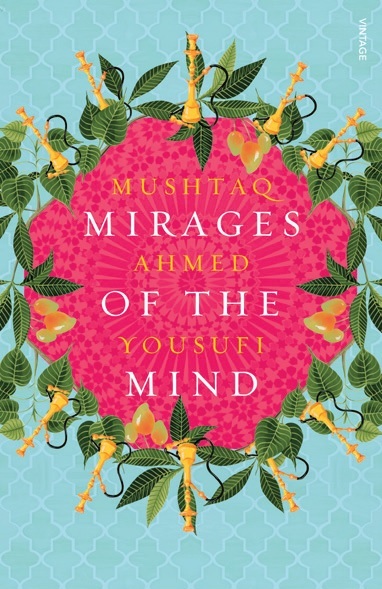 The early books of famed Urdu satirist Mustaq Ahmed Yousufi (b. 1922), Chiragh Talay (1961) and Khakam-e Badhan (1969), functioned in the college space for us in Lahore as cigarettes function in a prison camp - a currency, a momentary respite, a surge, and a day dream. We used to crack jokes from his oeuvre claiming them as they were uttered. He was not very well liked by my elders, however. They found him a poor replacement for the other satirists at play, Pitras Bukhari or Mustanssar Hussain Tarad or often Ibn-e Insha. Yet he was beloved by us near-adults as a rock star.

Now a new translation from Urdu of Yousufi's Aab-e Gum is coming out (by end May). Matt Reeck and Aftab Ahmad, the co-translators, have excerpted their translation earlier in Caravan India and Asymptote. They were both recipients of the 2012 PEN Translation grant for this project.

At the occasion of this publication, I asked a few questions from Reeck & Ahmad. Enjoy:

Q. Who was Mushtaq Ahmed Yousufi?

Mushtaq Ahmed Yousufi is a humor and satire writer and a resident of Karachi, where he has lived since immigrating to Pakistan soon after Partition. How he will be remembered is still up for debate: while he was the top official at many major Pakistani banks, he is also one of the greatest living Pakistani writers. With more publicity for his works, he may last in the collective memory of literary audiences in South Asia and abroad for this latter skillâ€”that of a writer.

Q. Why is it important to translate him into English?

His work is good. It deserves to be read by more people. That's the simple answer. The more complicated answer involves how world literature operates, and how its restrictive canon needs to admit more writers from unrepresented areas and literatures, like Pakistan and Urdu, respectively. For inclusion in world literature canons, texts must be available in English, or another major European language, for these are the languages of arbitration in these canon formation processes.

Q. How does his humor translate? Did the idiomatic English help or hinder his Urdu? Please give a small excerpt from your favorite part.

One reader, upon reading our translations, summed up his impression by saying, ”It's charming.” That goes a long way to proving that his humor does translate. To say that all of his humor translates, though, would be going too far because intense language-specific games (one of the many types of his humor) are never as resonant in translation.

Your question about our English and his Urdu can be answered in many waysâ€”some of them quite time-consuming. The short answer is that we made every effort that the two styles matched as closely as possible and that the translation read fluently in its native languageâ€”which is to say, English.

It's hard to choose favorites from a novel that's so long and so full of wit and pathos. One of the most touching vignettes describes the interactions between Basharat, his father, and Basharat's first (and lame) horse. This section, in the chapter “A Schoolteacher's Dream,” is called “Miserable Company.” Here, Basharat wants to put Balban “out to pasture” and get a new mare, but his father, who is now quite emotionally invested in the woebegone animal, cannot deal with this possibility.

Basharat's father was opposed to getting a mare for another reason. He was very upset because Basharat didn't believe in his miracle cures. He was prone to cursing out people. He didn't openly curse out his son, but he said that if he needed to have a purebred mare to keep his line going, then, please, go ahead, but he himself wouldn't set foot in such a house, not even for a minute. He also threatened that he would go wherever Balban the horse went. The fact of the matter was that his father and the horse had become so close, that if the family had not forbidden it, the old man would have kept the horse tied to his charpoy's leg while he slept at night. When the horse approached, he would lower his head so that Basharat's father could stroke him while seated. He would put his nose to the horse's muzzle and, for hours, bitch and moan about the household's members, including his daughters-in-law. For the kids, the horse was a live plaything. Basharat's father said that since they got the horse, his hands shook less and he had stopped having nightmares. He had started calling the horse his son. Everyone gets sick of a chronic patient. One day, he lay moaning on the charpoy for four or five hours. No one paid him any mind. In the evening, when his heart symptoms (and his depression) increased, he said to the cook, 'Please bring Balban, my son.' The sad horse was the man's only companion in his old age and failing health.

Q. How did the process of co-translation work for you?

No translation project, or process, is exactly the same. How co-translating this book worked for us is different from Bombay Stories, for instance. First, it should be said that Aftab wrote his PhD dissertation at JNU on Ab-e-gum, and the book has remained a favorite of his. That is to say that Aftab likely knows more about this book, its intricacies, and its depths and folds that anyone else, save the author himself. For this project, Aftab prepared a literal translation with notes about allusions to the Urdu canon and so on. Matt translated independent of this, but when questions arose (which they frequently did) Matt consulted Aftab's literal version. Then we got together to read over Matt's translation line by line, making changes when necessary. The last step is particularly fun, and so we took advantage of the enjoyment it provided by going over and over passages that remained difficult to articulate in the new language.

Q. What is next for your own writing?