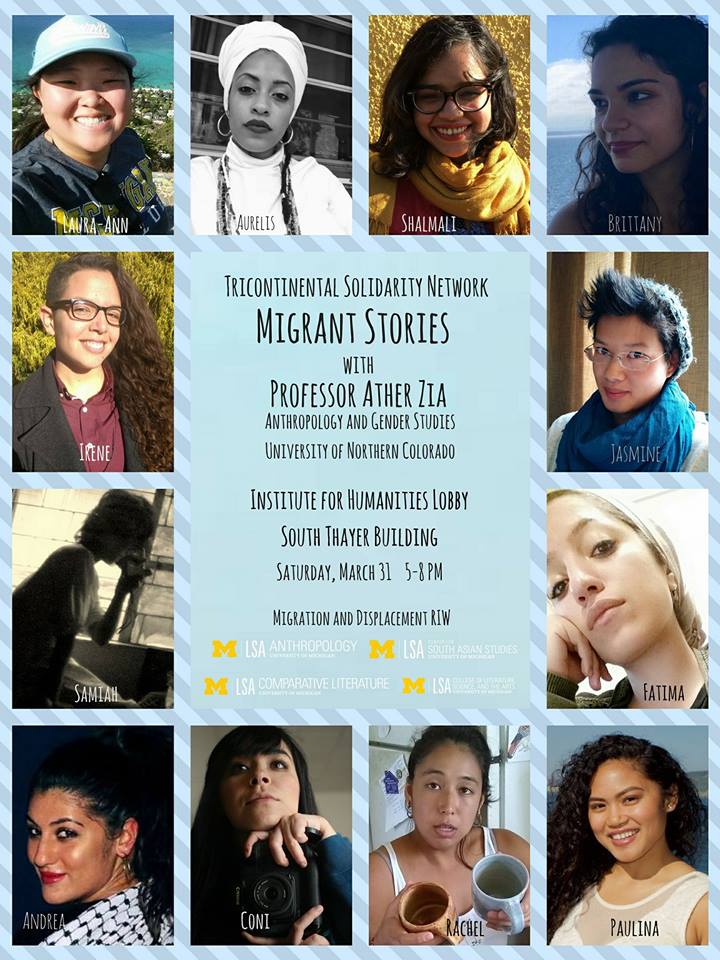 A Report by Miranda M. García

Immigration and migration are ubiquitous topics of conversation and debate, as the movement of millions of people worldwide has dominated international discourse. And yet, rarely do the voices of migrants figure prominently. This ethnographic report, in a small way, aims to amplify these very voices by documenting one, discrete event--the Tricontinental Solidarity Network's Migrant Stories Performance Night, where migrants or their descendants shared their stories. Thanks to the twelve student performers and the keynote speaker, the three hour event came to represent a global community on a deeper level, bearing witness to a rich diversity (and similarity) of experience, an incredible depth of feeling, and nuanced understandings of migration.

The event occurred on a gray, rainy evening in the University of Michigan's Institute for the Humanities. The gentle patter of raindrops outside was contrasted by the buzzing atmosphere in the building's atrium, where soft lighting illuminated the 80 or so attendees. Prior to the event, groups of people peppered the space, conversing, laughing, and eating the spread of Middle Eastern food provided in an adjacent room. Like the event's presenters, the assembled audience was a veritable cross-section of students and community members of all ethnicities and backgrounds. As the MC, Swarnim Khare, began to speak, the room settled into attention. 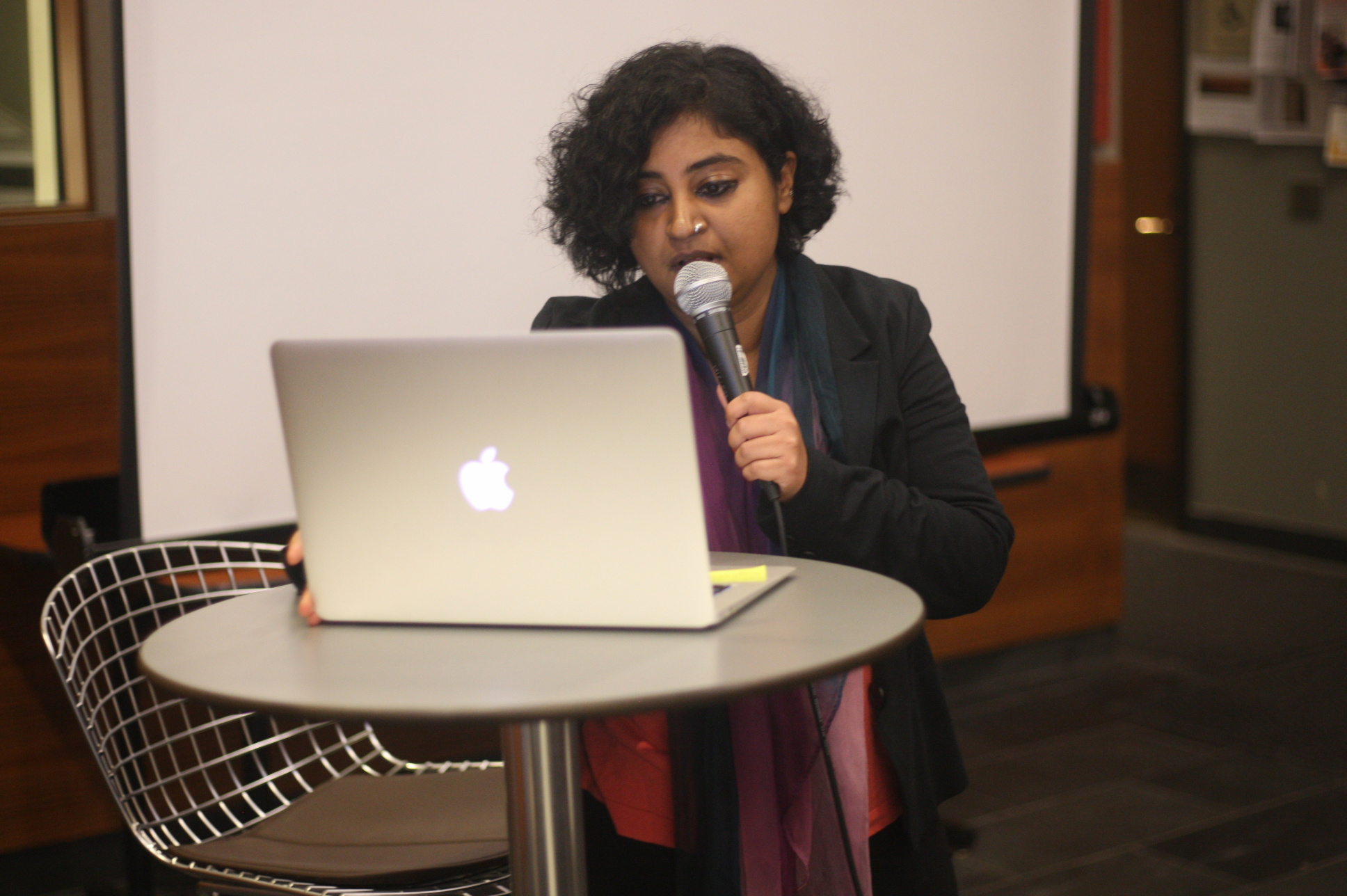 What ensued was a powerhouse of female voices. One by one, they spoke of the experience of migrating and its lasting effects. Whether soaring in song or rhyming in poetry, these voices together spoke of strength, resilience, and survival in the face of adversity and the myriad social, economic, and political difficulties faced by those who leave their homes for a foreign placeâ€”how their families made sacrifices to support themselves in the US, how they were made to feel like outsiders, or how even after years of life in the United States, prejudice and injustice plague their communities. These stories contained sorrow, anger and bitterness, but were also buoyed by strong, complex heroinesâ€”mothers, grandmothers, and other inspiring women who persevered and succeeded in carving a space for themselves. Thus, for many performers, freedom lives in struggleâ€”how Paulina Fraser's phoenix flies from the ashes, how Andrea Sahouri “exists to resist,” or how Shalmali Jadhav's “Shali” escaped abuse and domination. 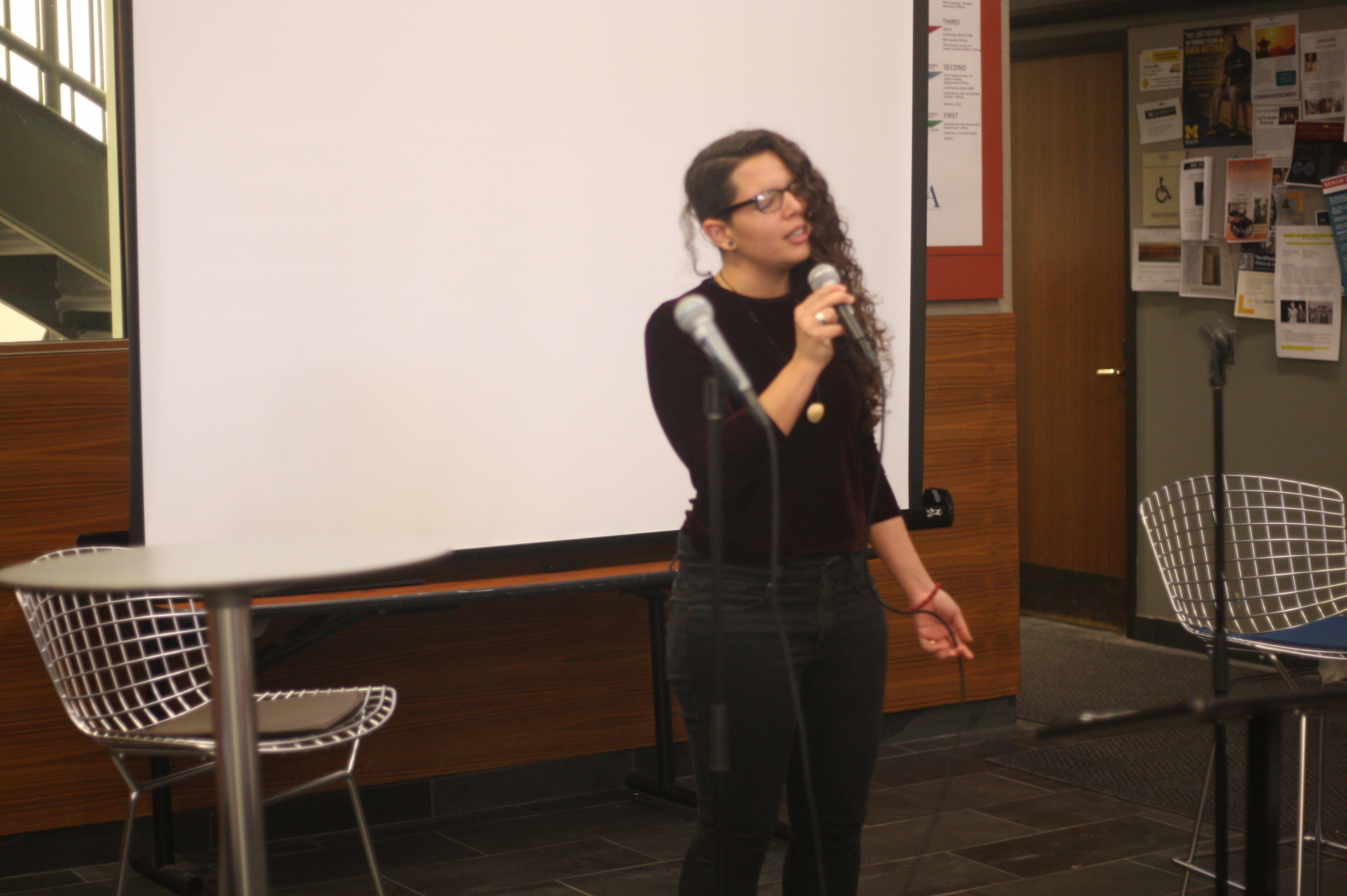 But, not all stories centered around these two polaritiesâ€”defeat and triumph, struggle and success. Whether a migrant or a child of migrants, performers spoke to deep feelings of longing and loss. Such feelings of estrangement were often assuaged by the search for home, though it came in many forms. For some, this home is not necessarily where one's family migrated from, but as Laura-Ann Jacobs shared, home is somewhere that engenders a sense of belonging, “a world that reflects me.” For others, home is a well-known, familiar place, but one that is painfully mourned at a distance--it's the sea, mountains, and dry air of Coni Contreras' Chile, the red and brown earth, coffee, and hummingbirds of Irene Inatty's Venezuela. Home, however, is not a physical place for all. Some recognized that for certain communities, like Fatima Hassan's Iraqi diaspora, “home” is neither a country of origin nor an adopted nationâ€”it lives in culture, in family, and in other spaces not found on a standard geographic map. 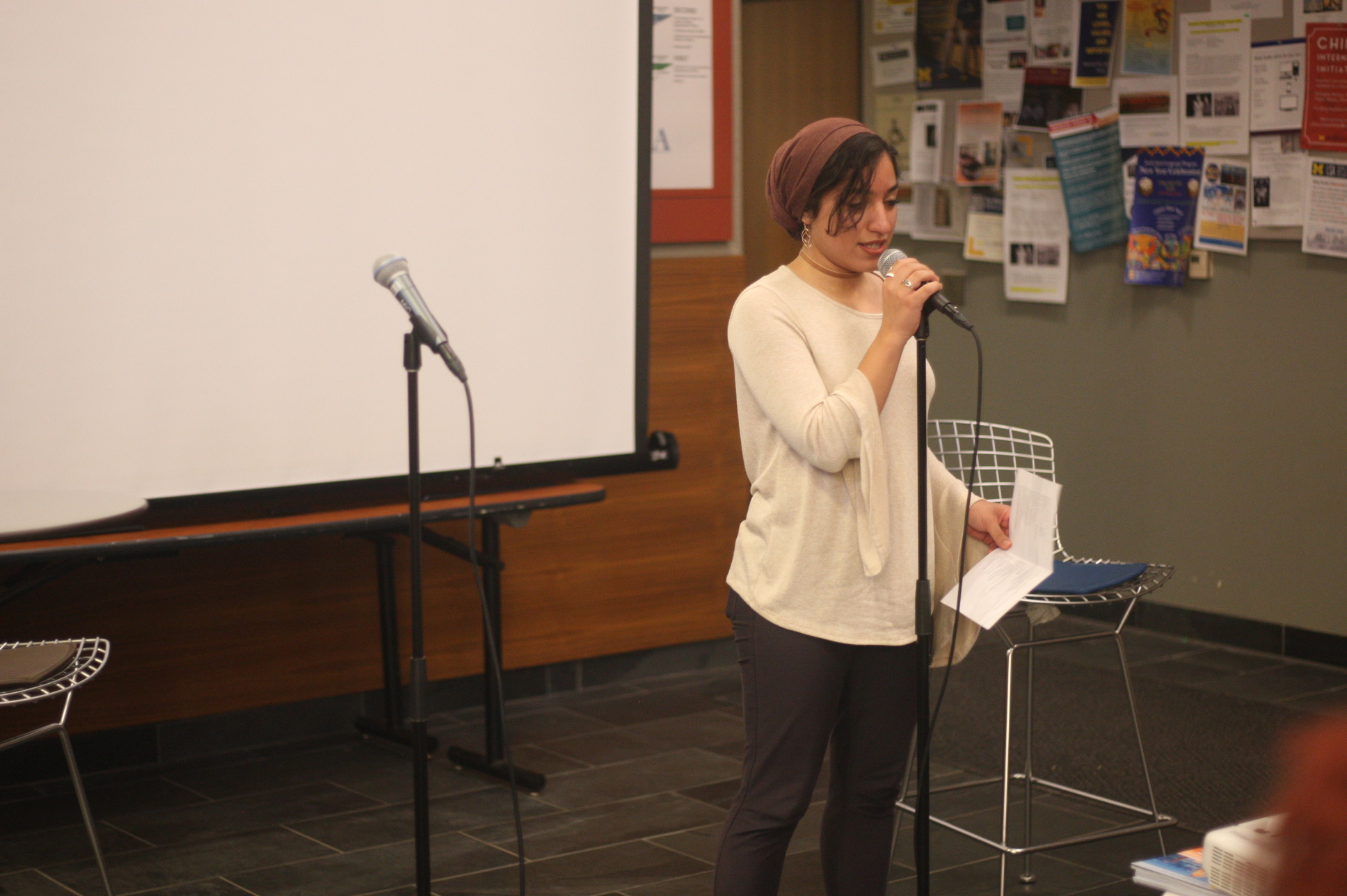 Thus, while loss figures prominently, so too does renewal and continuity. Rachel Hirsch acknowledges and wrestles with uncomfortable feelings of displacement, but finds “peace in words...comfort, joy,” just as Brittany Puller grapples with difficult family history through poetry. Similarly, Jasmine An may lament not being able to read her grandmother's Chinese writings, but connects with and continues her legacy through her own prose. Such words, sentences, and stanzas, therefore, evidence not merely survival, but what Gerald Vizenor calls “survivance” (1999). These female poets and scholars find solace as well as strength in the written word. In telling their stories, they talk back, carve out their own space, tell their own narratives, and play an active role in crafting their own realities. As Aurelis Troncoso powerfully demonstrated, “AmÃ©rica leaves me voiceless” no more. 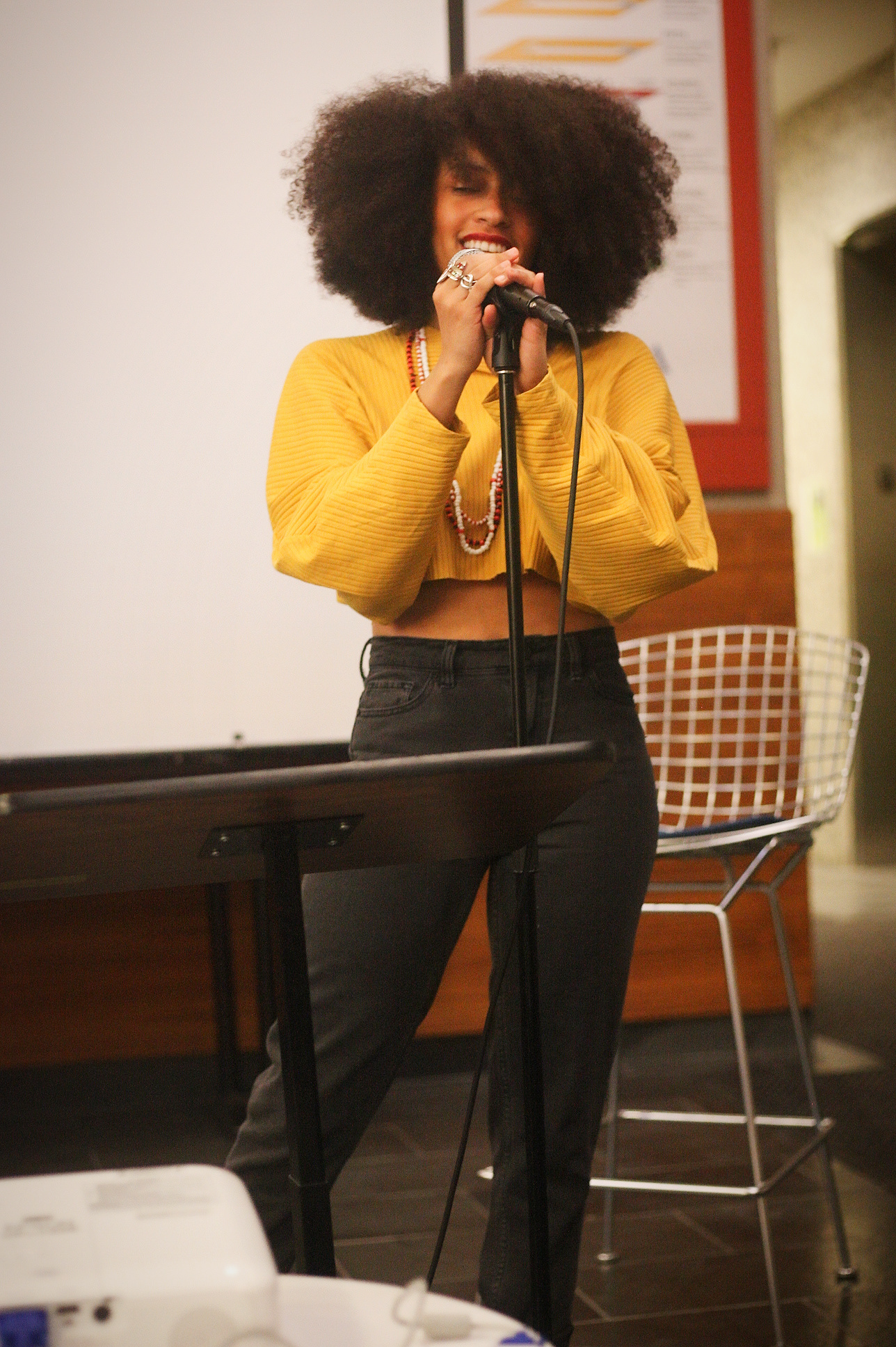 Professor Ather Zia, the event's keynote speaker, closed the event by echoing many central themes. As an anthropologist and a poet, Zia stressed the importance of incorporating poetry into scholarship, to critically engage with not just one's professional work, but also one's sense of place, home, and role in the larger migration discourse. Doing such work in the United States, in particular, also means acknowledging complex histories of domination and movement, and the need to use writing as a form of resistance and means of opposing injustices. Words are Zia's preferred “non-violent way to fight.” Like the student performers, Zia also recognizes the healing power of words, and points to this Spoken word and Performance night as a form of needed selfcare, especially for women of color, who inhabit difficult positions in today's academy. For Zia as well as the performers, words are both a sword and a ploughshare, and having a forum where these can coexist is essential to the survivance of migrant scholars, their work, voices, and bodies. 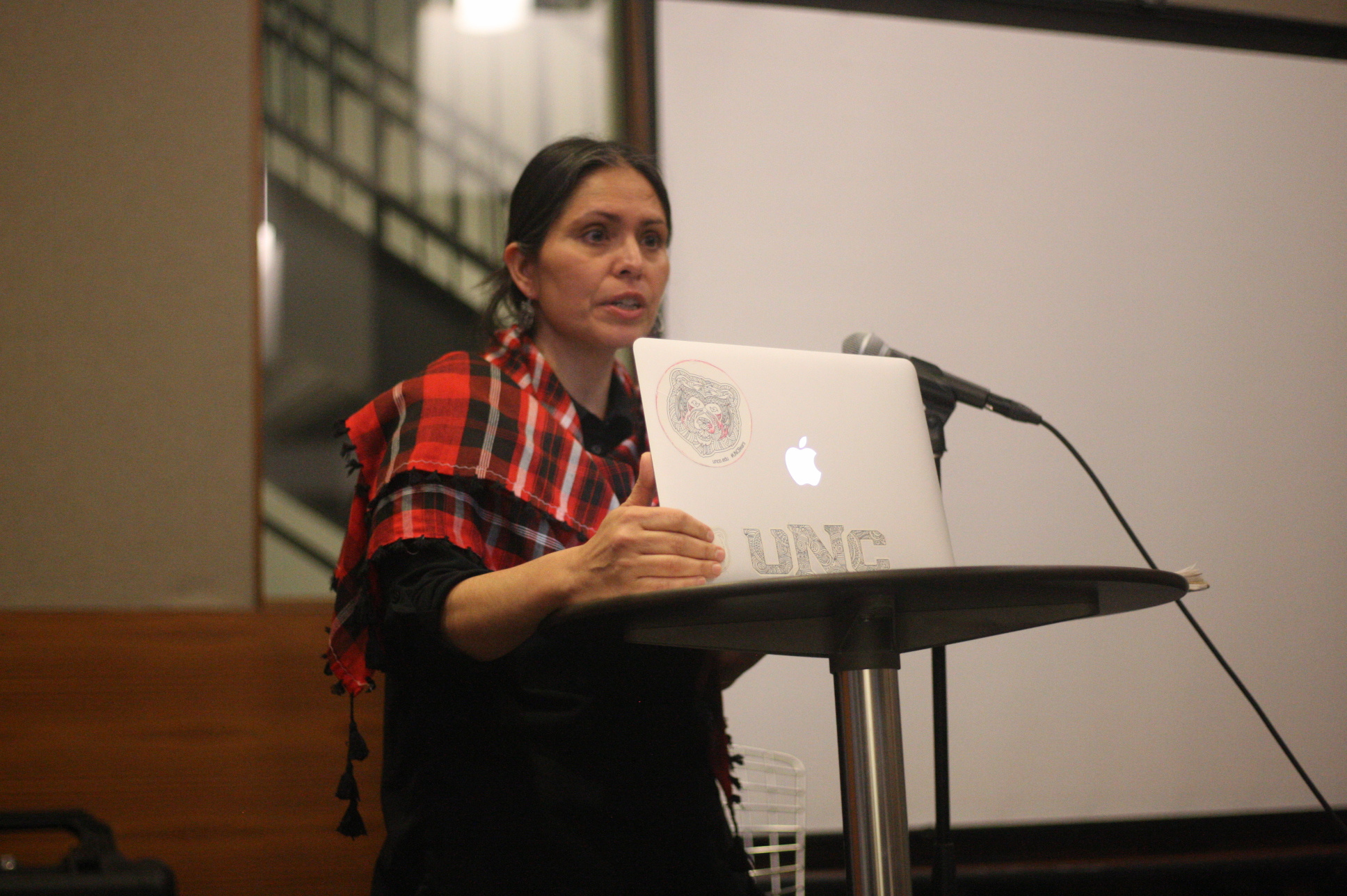