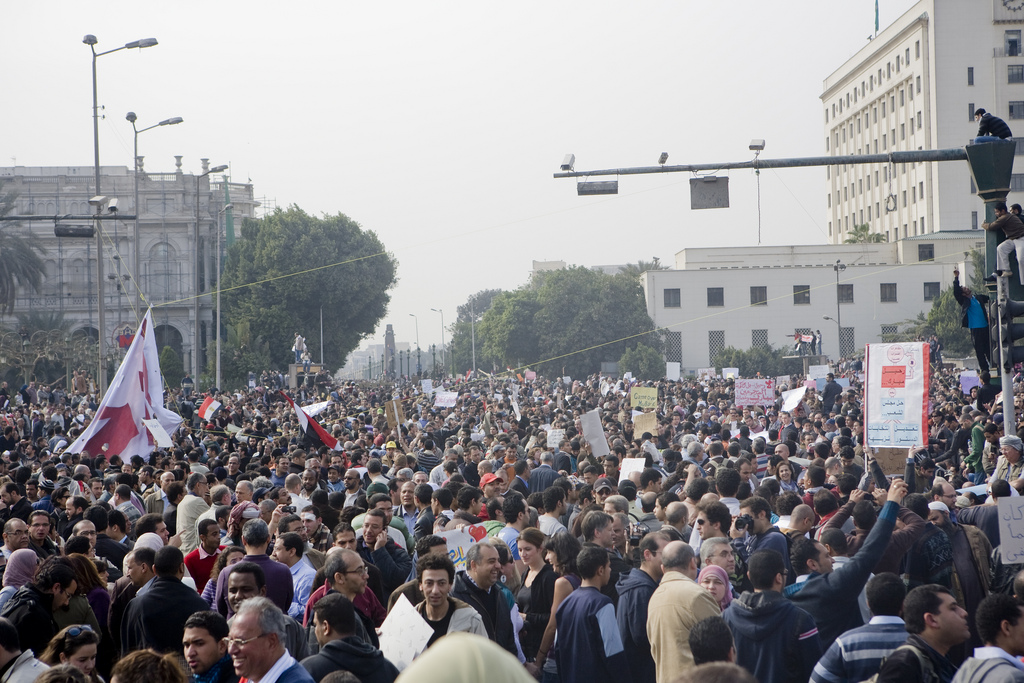 Violence has erupted in Tahrir as I post this. Violence of Mubarak's goon squad on the peaceful demonstrators. Yet, Obama and Blair will continue to protect Mubarak. No matter, the will of the people of Egypt will prevail.

[...] blogger Sepoy at Chapati Mystery translates a poem of renowned Pakistani poet Faiz Ahmed Faiz (first published in 1979) as a tribute to the [...]

I see a lot of people blaming America, but I think the Egyptian regime is primarily responsible and was almost certainly egged on by the Saudis and other Arab autocrats. Israel may have played a role but the US less so. The current American administration is not likely to initiate such advice, In the name of stability (which is actually all about Israeli occupation and not about stability) they are OK with suppression as long as it works. But I think they are smart enough to know that the best option here was not to have thugs smash heads in Tahrir square. The best option from the US point of view was to have Mubarak kicked out by some other army people and then have an interim (still fully pro-US) govt in place. This violence is not their first choice. Its not a matter of being moral or good. Its simply common sense. Any idiot could see that the best option for Egypt would be a smooth transition to a new Egypt and the US has nothing to gain by having Mubarak reimpose temporary control by force. Mubarak is not the Chinese communist party, which faced much narrower opposition in Tienanmen and with its large and disciplined organization it could kill thousands and impose order and sustain it for years (though not forever), and in any case, it provides very efficient capitalism to its people. 10% growth keeps many people quiet. Mubarak and his fellow crooks are in no such position and rely on nothing more than American bribes (paid on behalf of Israeli occupation) to barely survive. They can beat people into temporary silence (even that may not work now) but their future is darker after these acts. So, its bad for Egypt, its bad for the poor people of Egypt, but its not even in the interests of the US and I dont think the US has instigated thisâ€¦.

It is interesting that some American commentators are using the “clashes” trope. If you hear anyone say “clashes between pro and anti-Mubarak forces” that can only mean one of two things: 1. The commentator is a total ass and actually has no idea what is going on. Which is a good way to identify the total asses working in the media. OR 2. The commentator believes he or she is doing a service to American/Israeli interests by projecting the thug crackdown as “clashes”. Secondarily, this also means he or she is a bit of an ass because the US does not have enough of a media monopoly in the world and this sort of reporting/disinformation will only confuse the more clueless faction of the American people without influencing events in any wayâ€¦

Though I should add that Admiral Mike Mullen (who runs his own foreign policy, from Pakistan to Egypt) has talked to the Egyptian army chief and expressed “confidence in the army's ability to maintain order”. http://www.defense.gov/news/newsarticle.aspx?id=62665 Obama should take some initiative to rein in the Pentagon, otherwise things will go from bad to worse in this country too. I dont really think the pentagon is entirely evil (some of them probably are, but that is true in most institutions), I think their biggest negative is that they are stupid AND they dont know how stupid they are. That is a very bad combination, unfortunately its commonplace in militariesâ€¦.The US military is actually better than average in this matter (before anyone jumps on me, I am comparing armies to armies, not to vegan support groups in San Francisco) because the US army is not totally isolated from normal society and many officers are remarkably well educated. But still, they cannot resist the sight of a smartly turned out officer and in third world countries their leaders tend to see “disciplined army” and the “out-of-control rabble” and nothing in between.

Revolution that brings about no change should not be called revolution. Economically US can cripple Egypt so they don't really care who comes to power. Egypt still has to finance its debt owned by other countries. the Suez Canal, gas export, workers' remittances, and tourism is their main revenue generator. They will need help from Saudi Arabia with remittance and subsidized Oil since Oil is no longer exported. With food and fuel prices subsidized, you can keep a populous in check which the best and brightest leave. Modern World and Nation States is only 100 year old yet people think this is the way it has been and will be. Yemen oil reserves are not expected to last more than 9 years. Mexico suppose to stop exporting oil by 2012 which accounts for 40% of budget. I guess the mexicans are growing marijuana because NAFTA decimated their corn farmers. I didn't even talk about global warming. Exponential Growth is a bitch. Humans cannot overcome it no matter what yet how many are even taught anything about it.

The Egyptian army controls 1/3 of the economy. the Army is HEAVILY vested in real estate, hotels, resorts, etc. So it is just like Pakistan.

http://www.atimes.com/atimes/South_Asia/MB05Df01.html "The total debt and liabilities of Pakistan have reached a record 10 trillion rupees (US$117 billion)" "Every Pakistani owes more than 57,000 rupees per head to foreign and domestic lenders, compared with 22,000 rupees per head when the present government took over in 2008. "

Egypt will head in the direction that Pakistan and Iran have taken after Mubarak is ousted. And that is not a happy thought. I shed no tears for Mubarak and his group, but fear for the Egyptians and their future. The Muslim brotherhood will take over, though not immediately, and Egypt will then start its march backwards. Any interim leader, such as El Baradei, will turn out to be the Kerensky of his time and place, a well meaning intellectual out of touch with Egyptians, and undermined till overthrown, by the Moslem Brotherhood. The real 'democrats' in Egypt will be eaten alive, squeezed between an army loosing power and the Islamic Brotherhood gaining it, and without either the organization or the bloody mindidness to prevail. The naive well meaning westerners will watch helpless and in dismay as their fantasy world for the future of Egypt disappears. Sad sad stuff. And, oh yes, if there really was a democratically elected government in Egypt, the 85% of the people who believe that an unfaithful women should be killed, the 75 % who believe a thief should have a hand or foot amputated and the 95 % who believe that an apostate from Islam should be killed, will all get their way. The above figures are from a Pew survey done in Egypt recently; i may have got the figures confused, but the general tone is correct. Poor Egypt; poor Egyptians.

Elites matter more than the rest of the people, even in a democracy. The 75% who want hands cut off are just repeating whatever mindless propaganda they have vaguely heard about a religion they identify with...it doesnt matter, not even in a democracy. The elite is probably marginally smarter than the Pakistani elite. If Pakistan can be within shooting range of a functioning democracy, Egypt has a chance as well. The Muslim brotherhood is not as well organized as they are being projected. I agree that democratic Egypt may turn into an Islamist disaster zone, but it may also do better. Or it may become like democratic Russia or even democratic Belarus...that seems the most likely outcome to me... or some kind of army rule with a democratic face maybe.