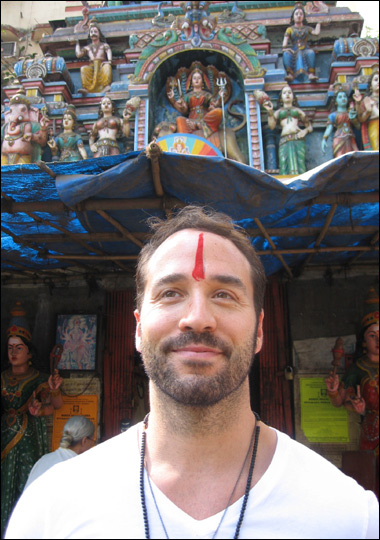 SMSes are running around saying that India has attacked.

Yaar... Can you not add to the madness that this war hysteria is?

Not nice. No SMS rumors on Xmass day.

In completely unrelated news, Samuel Huntington died on Christmas Eve... as someone who was forced into engineering and only dabbled in history, I did read his book (yes, that one), but my lack of training in the field makes me unqualified to comment without making a fool of myself... perhaps Sepoy can write at length on him?

wow, I missed that news. Thanks, Umar.

Yes, quite a few significant deaths this past week: Samuel Huntington, Harold Pinter, Deep Throat. Umar, I am certain that you too are dikhne mein lajawaab, but I meant the guy in the picture. :)

That, dear Mario, is Jeremy Piven during his visionquest to India. http://www.chapatimystery.com/archives/piven.html

Don't judge, y'all. I witnessed a vision quest of Sepoy's in Iowa City, Iowa. It's all relative.

If you look at it just right, you will notice an orange cone sticking straight out from Mr Pavin's forehead