We thank Professor Nayanika Mathur, keynote respondent at "Matters of State: Bureaucracy, Procedure and Power in South Asia," held at Princeton in April, 2019 for this conference report.

Nayanika Mathur is Associate Professor in the Anthropology of South Asia at School of Anthropology & Museum Ethnography at Oxford University. Her first monograph Paper Tiger: Law Bureaucracy and the Developmental State in Himalayan India was winner of the Sharon Stephens Prize awarded by American Ethnological Society for a first book. 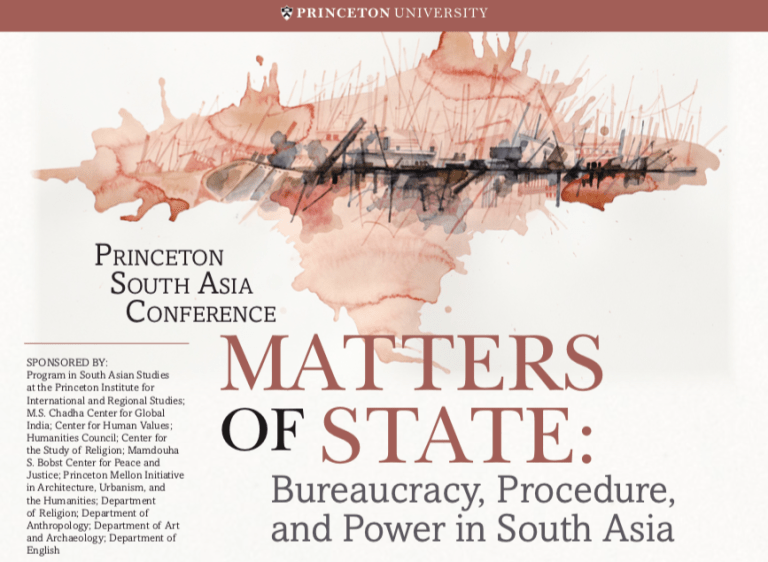 During my doctoral research and as an early career academic in the UK, I faced an almost-constant resistance to the centring of bureaucracy, paper, procedure, and banality in my work. These were not considered to be appropriate sites and objects of anthropological investigation into India. I was made to rewrite (read: failed) the methods section of my PhD prospectus as the proposal to do a thick description of government offices in India was considered unsound by the committee. Halfway through my fieldwork over 2006-08, I met a doyen of Social Anthropology in the UK who firmly told me that I could never “get India” through just sitting in government offices and I should go find a more traditional site such as a village or a caste/tribe group to observe in the Himalaya. Even my very supportive and otherwise non-Orientalizing doctoral supervisor confessed his relief that I had so much on tigers in my PhD thesis on the everyday life of the state, for “at least there is something Indian about this work.”

Happily, when I now relate these anecdotes to my students and colleagues, it is met with some incredulity. Largely, this is a consequence of an efflorescence of writings including several books on bureaucracy in the past few years and the coming together of something we can broadly discuss as a social sciences study of bureaucracy. The Princeton South Asia conference on 'Matters of State', held over 19-20 April, captured much of the intellectual dynamism and analytical purchase that the study of bureaucracy, matter, procedure, and power affords us in the study of South Asia.

Conceptualised and organised by Tara Suri and Amna Qayyum, both graduate students in the History department at Princeton, the programme was fantastically varied with panels centred on space and development; lineages of the state; violence and welfare; labour; authority; and the archive with its afterlives.

In his opening remarks, Jonathan Gold noted that, statistically speaking, it was easier to get into Princeton as an undergraduate than it was to make it to this conference! There were over 320 submissions for this event from around the world. The abstracts nicely summarise what the individual papers were about. The discussants--Hafsa Kanjwal, Sadaf Jaffer, Zahid Chaudhary, Philippe Messier, Wasim Shiliwala, and Kalyani Ramnath--did a splendid job of putting the panel-papers into conversation. Additionally, I am drawing out some of the themes that I personally found striking.

Interdisciplinarity. There was a genuine interdisciplinarity at play in this conference. The question of what it means to do interdisciplinary research or the obverse--isn't all research always already interdisciplinary?--often comes up. At the 'Matters of State' conference, the citational sweep was broad, cutting across traditional disciplinary silos. For instance, it was evident that the work on everyday bureaucracy or extraordinary violence has moved from anthropology to history; that readings of archives, their afterlives, and distinctive historical sources are being seriously positioned in ethnographies. Law was put into conversation with a range of disciplines, with legal history making a particularly strong showing. Cynthia Farid followed the life of Surendranath Bannerjea, especially the contempt case of 1883 against him, to ask wider questions about the locus of state power in bureaucracies as well as the antecedents of notions of judicial independence. Hardeep Dhillon traced the links between law and colonial violence through an excavation of redress and compensation mechanisms in the wake of the “Punjab Disturbances” and considered the question of how these processes got represented in historical scholarship. Neelum Sohail combined law with policing “to shed light on the daily making and re-making of the colonial state.” Beyond law and history, there were conversations that enveloped psychoanalysis, crime fiction, political science, and anthropology. Uponita Mukherjee played with the very idea of how genres of investigation travel, by situating the detective stories written by Priyanath Mukhopadhyay in the context of his role as a colonial police officer and the forms of writing and documentation that colonial policing demanded. Akshi Singh juxtaposed Freud's discourse and writings alongside colonial diaries, the work of colonial anthropologists, and the trial of a revolutionary terrorist. Noaman Ali critiqued a particular strand of political anthropology including its somewhat ahistorical approach, through the lens of political science.

Forms of Evidence. Another way through which one can talk about interdisciplinarity is by considering the various forms of evidence that were presented. The visual was combined with the more staidly bureaucratic with Joppan George showing footage of bombs being dropped after polite paper notices warning of imminent action were dispersed along the North-Western Frontier Province after the first World War. Silpa Mukherjee alerted us to the “sensory ecology of disco” by playing clippings in different languages of the same disco songs in 1980s Bombay and working through one private photographic archive to “curate a lost decade of heightened sensuality and contraband.” Sowparnika Balaswaminathan traced the forms of evidence that the Vishwakarma community are using to construct their own record of their caste history and ethnography including “diverse narratives that take the form of myths, rhetoric, and affective testimonies.” Shahwar Kibria compared the history of Qawwali in India and Pakistan, using oral, historical, and sociological sources to trace the divergent roles of the two states in maintaining (or not) this musical form. Chandana Anusha re-presented the history of port development in Kutch through a focus on more-than-human forces and by centring the interconnections of the riverine, marine, and terrestrial.

Technology. Technologies of various forms — from cable wires to biometrics to CCTVS--were centred as matters of state and deftly utilised to get at contemporary state power and performances. Ayesha Omer foregrounded the fiber optic cables in Gilgit-Baltistan that are being placed as part of the China Pakistan Economic Corridor. Included in this work were notions of dust/dhua, digital freedoms and futures, as well as a complex transnational network of state and non-state actors that coalesce in producing certain effects in Gilgit-Baltistan. Thalia Gigerenzer described the side effects of the recent entry of CCTV cameras in a low-income Muslim neighbourhood in Delhi and its linkages to talk of a bad moral atmosphere. Zehra Hashmi's study of The National Database and Registration Authority (NADRA) in Pakistan showed how “older” technologies of the state such as registers from other identification systems are folded into this hyper-modern system of biometrics, databases, algorithms and network technology as well as the salience of kinship and relatedness to its everyday functioning. Iris Yellum asked the question of how regional agricultural heritage comes to be constituted through a focus on seeds and the diverse institutions that do the work of conserving them.

State (un)making. How are states made/unmade/attempted to be made? How are they affective and gendered? And how do we understand state limits and failures?
Varsha Patel looked at how cows and bulls come to be inscribed into place by studying the bovine practices of the modernizing Princely State of Mysore between 1900 and 1947. Maira Hayat centered the narratives of female bureaucrats in Pakistan in order to both expand how we come to understand corruption and also to demonstrate how profoundly the state is a gendered entity. Kyle Chan critiqued Weberian notions of bureaucracy through his interviews with railway bureaucrats in India to show the role occupied by affect and what he describes as “bureaucratic egos”. Tiraana Bains described the desire of the East India Company in the 18th century to construct a “well concerted union” of its multiple Presidencies; a union that was never quite realized due to intra-Imperial relations and rivalries amongst the competing Presidencies. Dana Kornberg showed the limits of the state through a study of the failure of a Public Private Partnership (PPP) on waste disposal in Delhi. Divya Subramanian analysed a new Master Plan of Delhi that was drawn up by the Ford Foundation and U.S. planners in the 1950s not to talk of its success or failure, but rather to think about how it was imagined and contested.

Gyan Prakash made two observations on the conference. The first was the rich and diverse work on Pakistan. All too often South Asia comes to stand in for India with token papers on other states from the region tagged on. At this conference, not only was research from Pakistan very present, but was also woven into the wider discussions on South Asia in an organic way. Secondly, Prakash noted how there were so many more women than men in the conference room that when a man came up to speak or asked a question, we were almost a bit surprised by their presence.

The question of what kind of knowledge is produced about South Asia — what sorts of categories we allow into the frame or sites that we deem appropriate for researching — is, of course, intrinsically bound up with who gets to produce it. The intellectual openness and innovativeness of the 'Matters of the State' conference was inextricably linked not just to the consolidation of research on bureaucracy and the state, but perhaps more importantly to the utterly refreshing fact that the conversation was dominated by women, including many of South Asian origin. As we all discuss the dire need to decolonise the academy and reconsider practices of knowledge-production it is, as ever, graduate students and early career researchers who are leading the way through events such as the Princeton South Asia conference, 2019.