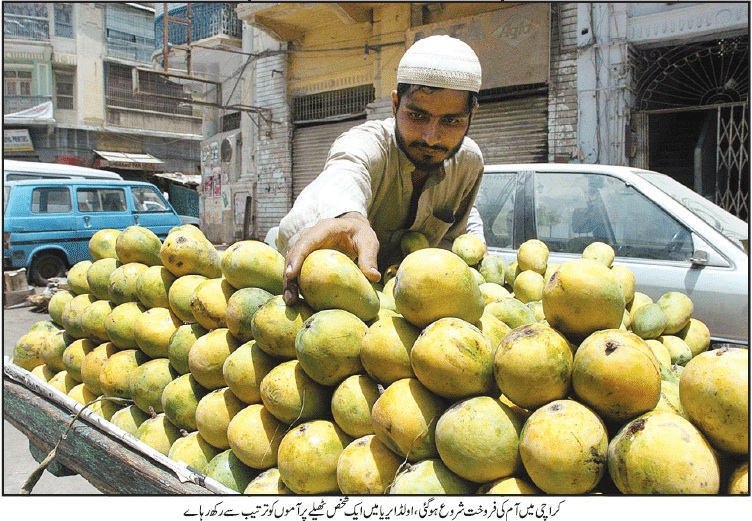 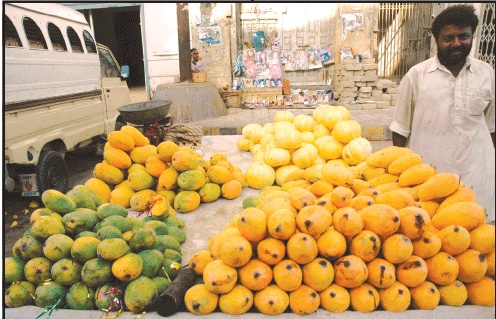 Enough doom and gloom ... mangoes are in the market people! MANGOES. Mangoes like Sarholi, DoSahri, Almas, Sindhri, Choonsa, Anwar Ratol....which must mean that summer is nearby. And guess what? Next summer, we desis stuck in pardes will be able to buy some of those fine, fine Sindhi mangoes in Chicago too.

are you a mango nationalist? i would very much like to be, but our florida mangos are simply not up to the mark.

Regionalist, really. Just giving a shout out to the Sindhi farmers. I am sure the Goans have some fancy mangoes that I would love to devour as well. Florida, not so much.

mango enthusiasm does tend to elicit expressions of regional patriotism. just try telling a maharashtrian that hapus-alphonso is overrated (which it is). every once in a while you get a truly exquisite florida mango, but most of them are a bit too acidic and fibrous. too much inbreeding, perhaps.

What? The Alphonso is overrated? Shush. You must've had some measly leftovers. Btw, the best flavor of Mangoes (and one that comes closest to the subcon variety) is a brand from Mexico called Marathon. Hard to find, but it is reasonably good.

Grandmother (from Bombay) always used to say that no mangoes compared to the Alphonos--probably the thing she missed most about India. Mexican Mangoes? Pssh.

'Sehwan dah, Sindhri dah' ... I wonder if Shahbaz Qalandar was refering to his residency or the mango which must have given him so much joy?

I had an Ataulfo recently that everyone here raves about but it was not great shakes. Maybe there will be some nice dussehris in Delhi. I think I prefer Pairi to Hapus nowadays, but will report back here after I've had my fill in a few weeks! :) Can someone identify the varieties in the photos?

after my last trip, i came back to california where we get pretty darn good mangoes from central america pretty much year round (sorry, slow/local food folks: i'm good about other produce but can never pass by a ripe mango). my buddy, who loves to gnaw on the pits, got me a mango splitter/slicer from amazon which is amazing, so now i split and she gnaws and we both are blissed.

dk: The top picture is Fajri, I think. In the bottom pic, the one in the right middle looks Sindri. Then there is the Fajri and maybe Chaunsas. Btw, check out this photoset of Mango stickers from Pakistan shot in Oslo. I tell you, the internets are filled with wondrous things.

My favorite is one we call the "Malghoba" (at least my Karachi relatives call it that) -- anyone know what other names this goes by? And for all ye lovers of local flavor, in the eastern and southern Deccan the "gadha maaroo" is not unknown

mango enthusiasm does tend to elicit expressions of regional patriotism. just try telling a maharashtrian that hapus-alphonso is overrated (which it is). every once in a while you get a truly exquisite florida mango, but most of them are a bit too acidic and fibrous. too much inbreeding, perhaps.

The very best mango's to buy are the Marathon Onese outta mexico later on in the season like mentioned before. But i also really Like Farmers best produce mango's from mexico also just as much. But earily on in the season (march-sept) Mango's that come from guatamala are the very best in my opinion. Usually the mexican mango's are sweetest Mid - late in the season. I live in an area where some local small ethnic produce/meat markets almost know their produce as well as me. Lucky i guess