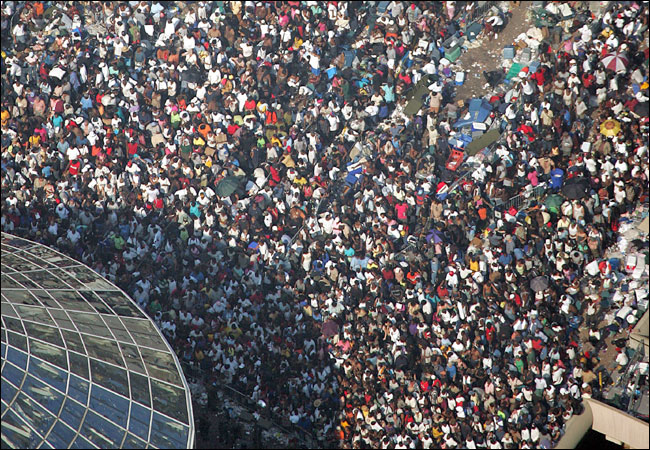 A rumor killed almost a 1000 Iraqis in one panicked moment in Baghdad. A rumor about a suicide bomber in a religious mass of thousands on their way to a shrine.

Rumors of riots and killings, of molestors and rapes are circulating in New Orleans - adding to the panic, the destruction. Baton Rouge is locked down for fear of same rumors.

These two catastrophies are linked inextricably. The war in Iraq siphoned away budgets, National Guards, and attention. The failure of infrastructure, of chains of communication, of emergency resources, of planning, of back-up planning, is something that those Iraqis and Thirdworlders are quite familiar with, right? But that never happens here. We are prepared.

I remember the seething anger when I read the following in The Economist, August 4th, 2005: A Loss of Prestige

One unquantifiable cost of the floods has been on Mumbai's status. As India's financial centre, there had been hopes that it might rise to become the next Singapore or Shanghai, with comparable living standards and amenities. Although the severity of the floods would have taxed the emergency services of even the most advanced city, the extent of the devastation and the lack of a coordinated response has led to strong criticismâ€šÃ„Ã¶âˆšÃ‘âˆšÃ†and a degree of scorn about Mumbai's prospects of becoming a "world city".

In particular the poor state of Mumbai's drainage infrastructure, owing to neglect and indiscriminate constructionâ€šÃ„Ã¶âˆšÃ‘âˆšÃ†on mangrove swamps, for example, which used to act as natural floodwater drainsâ€šÃ„Ã¶âˆšÃ‘âˆšÃ†meant the impact was worse than might have been expected elsewhere. (The state water-resources minister, Ajit Pawar, angered many by blaming the proliferation of shanty towns for blocking drains, rather than rapacious developers.) The chaotic response to floods betrayed the ineffectiveness of the city's disaster-management planning, too. A disaster-management plan had in fact been drawn up, with the help of the World Bank, in 2003. This envisaged the augmentation of drainage, corridors for public transport, an emergency public information system and wireless communication among emergency services and the transport system. But there was little sign it was followed.

Now go read Paul Krugman's A Can't Do Government. Or Jon Elliston's A Disaster in the Making. Or Joel Bourne's Gone with the Water. Or the Louisiana Homeland Security report from last year. Might as well have titled that PDB Hurriance Katrina Determined to Strike Inside US. Everyone knew this was coming. Our government didn't do anything. That is the bottom line.

KING: Anderson Cooper in Biloxi, Mississippi and you were an angry man today, Anderson at what?

ANDERSON COOPER, CNN CORRESPONDENT: I wouldn't say I'm angry, you know. I think I'm tired of hearing the politicians say that, you know, they understand the frustration of people down here. To me, you know, it's not frustration. It's not that people are frustrated.

It's that people are dying. I mean there are people dying. They're drowning to death and they drown in their living rooms and their bodies are rotting where they drowned and there are corpses in the street being eaten by rats and this is the United States of America.

You see this? Cover of LAT yesterday. Floods happen in Dhaka or Bombay. Civil wars erupt in Baghdad. Shanty towns and refugees exist in Pakistan. It is always over there. Unless it is over here.

Today The Chosen One said this is unacceptable. Yes, HIS ADMINISTRATION is unacceptable. Where is the DHS? What if the terrorists had blown up the levees? EVERYONE WATCHED KATRINA LUMBER TO NO FOR FOUR DAYS. Where was the preparation for this? We hear about dirty bombs a lot from Cheney et al. Can I see some plans for evacuations of Chicago? WHO THE FUCK HERE HAS A CLUE!?

"They're feeding the people a line of bull, and they are spinning and people are dying".

And from Bush's statement released just now, the there-not-here refrain is even more prouncounced: "And I'm not looking forward to this trip. I got a feel for it when I flew over before. It -- for those who have not -- trying to conceive what we're talking about, it's as if the entire Gulf Coast were obliterated by a -- the worst kind of weapon you can imagine. And now we're going to go try to comfort people in that part of the world". NOLA is no longer in this part of the world?

Our friend, David Brooks, seems to be redeeming himself at least partly. Good analysis here.

"And we're going to try to comfort people in that part of the world." Yet another exhibit in the case proving that George Bush is a raging asshole. If you want to vicariously vent a little hate, peep here: http://stevegilliard.blogspot.com/2005/09/we-told-you-so.html

and seething he should be, as should everyone who has tried up until now to address the idiocy and maliciousness and pure evil of this administration in even, intellectual tones...

Bush is an a$$hole (in one form or another), but this goes far deeper than a particular person--it extends at least to an administration, possibly to a trend, and potentially to a political culture of elite needs trumping others that's deeply entrenched. Like hate crimes, what happened in New Orleans is a news spike that represents a lot of underlying trends. Please don't take this as a defense of Bush. He should be removed from credibility as soon as humanly possible, and his authority circumscribed to the extent possible.