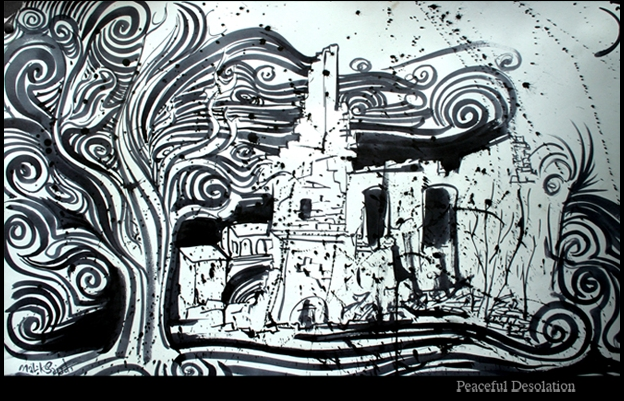 Sonam Kachru, a dear friend and colleague, gave us a beautifully rendered translation of Habba Khatun some days back. He has now finished an essay set to appear in Greater Kashmir containing a set of poems translated by him - along with the line drawings of Malik Sajad- which is part of a broader co-operative project. I will forward a link to you all when the issue goes up, but in the meantime, Sonam posted the essay on his blog and these bits have grabbed my attention, and refuse to let go. I am so very eager to see this project be fulfilled. It will change our worlds as only poetry can.

I can say that I did not translate or choose these poems with the headlines in mind. Neither these poems nor the larger project of which they are a part are intended as aesthetic opportunity in calamity. But the poems, I feel, are not entirely unrelated to our time. They are not unrelated in something like the way a frame is not unrelated to a picture, though it is not what the picture is about. Or, perhaps, they are not unrelated in the way environments are not unrelated to houses and those who build them to live. Some poems are not unlike rooms in houses built for certain climates; others make a climate for our times in which it is possible for us to go on to build. In the matter of fathoming our climate there is a quality of attention to be had in poetry distinct from the opportunities of a headline. We have been, these many generations, on fire, Moti Lal Saqi writes. So many fires, and this, our unholy normalcy, only one among the kinds of burning.

It is not in bad taste, I think, to celebrate words at a time when one is, to borrow a phrase from W. B. Yeats, painfully conscious of “polite, meaningless words.” For I think with Abdul Rahman Rahi that it is in the work of poetry that we are sensitized and offered a chance to go beyond our contentment or despair with degenerate speech and thought, our “empty shuttles threading wind.” I think what Amin Kamil says is true: “In a ruined city, a trembling heart is treasure,” and that often the heart is shown in a word that trembles, a word that is true. There are those who have yet to see, to hear this trembling. Even as we bring out our dead, we can and must show others what yet is alive with us, what else is endangered.

The range of these pieces is important to me. For these eight pieces are offered here as an invitation to a project entitled 'Make Humans Again: Poems of Kashmir'. This project will contain more contemporary poems by more authors and, I sincerely hope, a parallel text in the form of the prodigiously talented Malik Sajad's art. The project is an attempt to introduce something of an echo chamber in which to begin fathoming Kashmir's many, very different voices, an ecology of senseâ€”a fragile ecology, to adopt a biologist's wordâ€”still largely unknown to too many. For a little too long Kashmir has been restricted to what can fill and not disquiet the honeymooner's itinerary.

I have called the project 'Make Humans Again,' and spoken of what is made. I do not follow here only the Greek roots of the word 'poetry' in speaking of something to be made, nor only intend the Sanskrit conceit of the genius of poets making the world once again. I follow Dina Nath Nadim who said “I've got to make humans of Hindus and Muslims Again.” I do not know what it is to be human. It is fitting to recall what Nadim was later to sing to the tune of a folk melody (Yaa Shaah-i-Hamdaan): “Are even we human? Who says human?”, a piece where the only movement in a bleak landscape is the onset of winter, the persistence of Law, of hunger and those who still outrun it all. The piece ends--“Do you give a damn?I don't give a damn.” I'd like to think of Nadim letting the matter of being human resound as an indefinite imperative, resisting the smug comforts of knowing or the despair of unknowing. So many times, and in so many ways, being human has been a question. (Kamil writes, “These must then be wraiths, These where Man, you say, we've yet to raise.”) We are not alone in being creatures that environ ourselves partly through our own efforts, but we are perhaps unique in taking for our materials such things as words. One thing made, unmade and made again in the curious intimacy of sound and sense that is poetry is our nature: as we are and as we yet might be. This is potentially the work and the redress of poetry.

I wanted to submit this link (and perhaps invite you to respond) . Didn't know where else to put it besides as a comment. http://www.boston.com/news/world/middleeast/articles/2010/07/25/taliban_war_on_us_aided_by_pakistan_documents_suggest/?page=full