[Following is a guest post by Pukhraj Singh (Email: pukhraj AT gmail), the founder of Abroo.]

The latent passions of this land are steeped in love and longing. If one sees Punjab solely from the perspective of its oral traditions, local continuities and folklore, then the picture that emerges is in complete contrast to the drubbed, kitschy monochrome making its way to the mainstream. It is the unquestionable faith and conviction of its peoples, which have often subverted the rigid precepts of religion and nationalism, to create identity markers that are more organically rooted in the mythos and geography.

By innately focusing on the unseen and the unsaid, there will be an emotional realization of a certain kind of inexplicable absence, and the purity of absence, overwhelming its verdant backdrop. The dirt-tracks crisscrossing the rural outliers are pockmarked with the signage of a time bygone, managing to exist somewhere between the interstices of memory and history.

It was from the critically-acclaimed documentaries of Ajay Bhardwaj that I first learnt to conduct sÃ©ances, invoking an esoteric Punjab that has been rarely been experienced or talked about. His trilogyâ€”Kitte Mil Ve Mahi, Rabba Hun Kee Kariye and Milange Babey Ratan De Mele Teâ€”has archived such crucial portions of its culture that the future generations would forever remain indebted, be it the lesser-known Dalit Sufi customs or the militant pluralism of its men of faith like Baba Hajji Ratan and Sakhi Sarwar. Beating the post-traumatic amnesia of the Partition, the Green Revolution and the militancy, reemerged a few counter-narratives such as theseâ€”and that is how I started trusting the contemporary lore more than the intellectual discourseâ€”leading me to territories uncharted.

When Chief Minister Parkash Singh Badal laid the foundation stone for a 120-crore Valmiki temple this October to woo the sizeable community, the irony wasn't lost on me. For decades the Balmikis or Mazhabi Sikhs have consecrated their identity and heritage in barebones temples, overshadowed by the mighty village gurdwara. The fretful caretaker of one such insipid place of devotion in village Dhotian (district Tarn Taran) first apprised me of an unpardonable depravity perpetrated by the local Sikh clergy, which barred the low-castes from performing kar seva (voluntary service) because “they looked dirty.” The dilapidated building, sticking out like a sore thumb, then seemed like a towering tribute to the inconsequential life of a Punjabi Dalit. 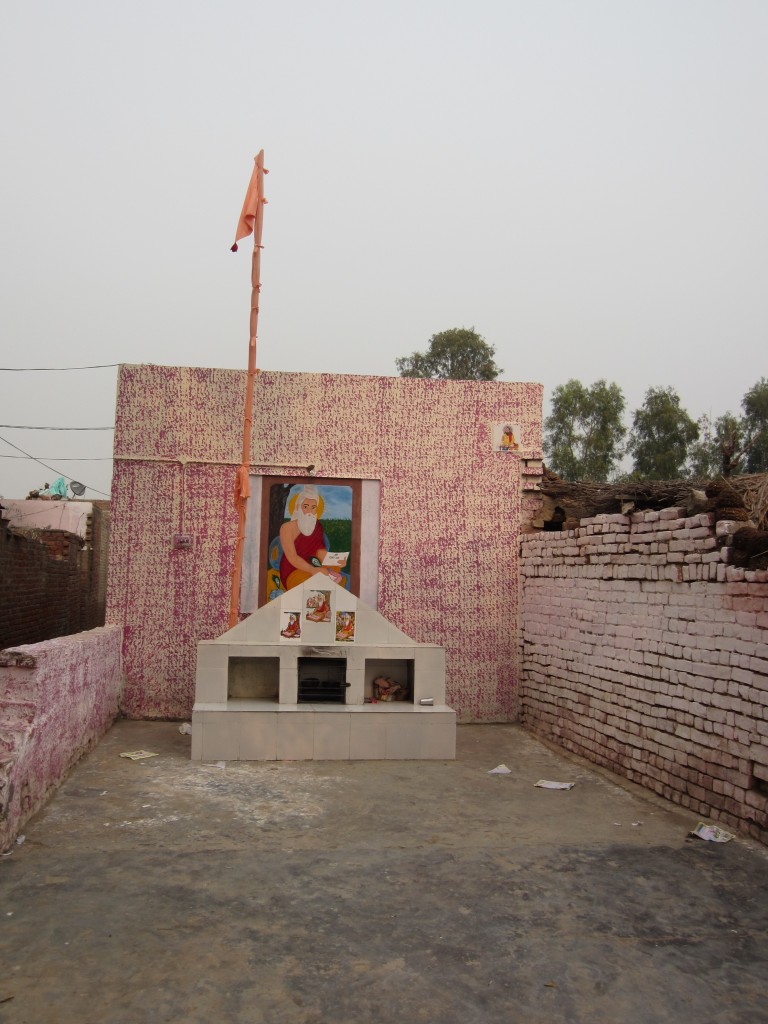 The Balmiki shrine of Dhotian.

I witnessed a similar clamoring for acceptance once again at Talhan (district Jalandhar), where a local Sufi dargah became the epicenter of a violent caste riot that engulfed the village in 2002. When the gurdwara clammed up under pressure from the keepers of its tenets, it was this dargah with a Hindu sajjada nashin (administrator) that owned up to the residents and offered to quell the tensions. 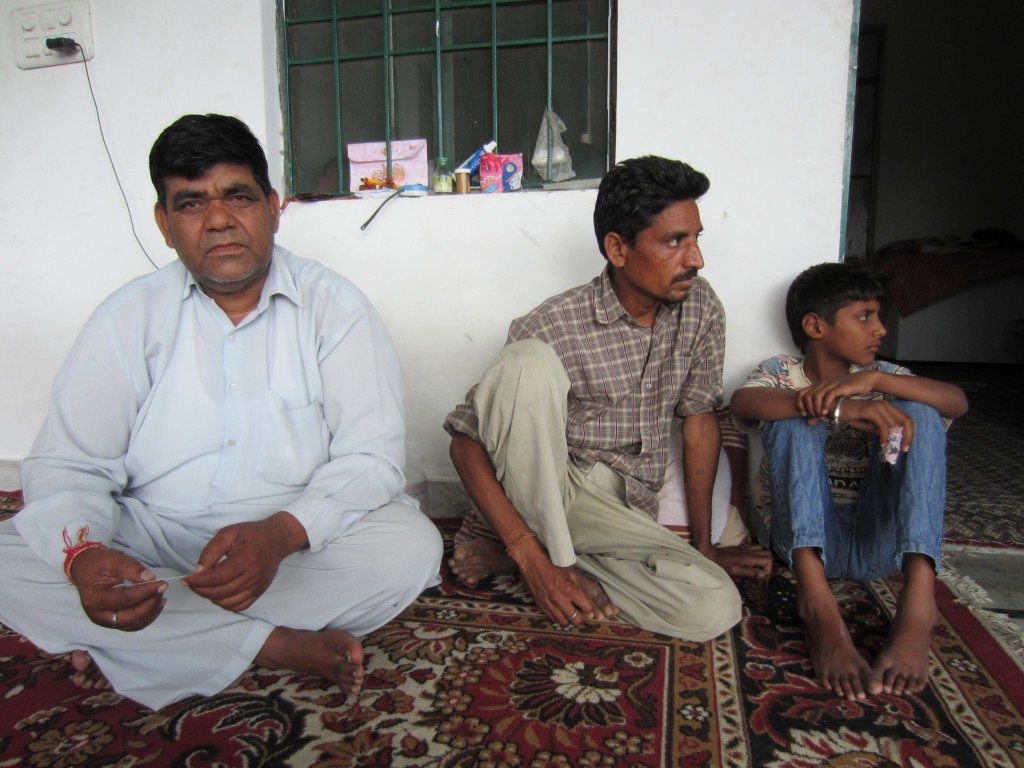 The unassuming Hindu administrator (left) of the Sufi dargah at Talhan, responsible for quelling the violent caste riots.

But there have been larger, more visible signs of such grassroots disruptions. Dera Sach Khand at Ballan acts as a tincture for the collective wounds festering in the hearts of the downtrodden. An hour's ride from Jalandharâ€”a city aptly named after an ethnically-misplaced “demon” king, thus fit for becoming the cradle of the biggest chunk of Dalit population across all the statesâ€”Dera Ballan is one rare example of how a fomentation acquired the size of a movement, and then got institutionalized under a spiritual precept. It is the home to the Ravidasias, a swanky new religion aiming to channelize the angst of the marginalized, after one of its tallest leaders, Saint Rama Nand, was assassinated in Vienna by Sikh fundamentalists. So enraged were the followers that they took to the streets, bringing the whole of Punjab to a standstill during the summer of 2009, as even the chief minister had to think twice before approaching Jalandhar.

I visited the imposing precinct of Dera Ballan, while the cinders of injustice were still alight. Amidst the overall sense of organization and tranquility, the palpable fear and loathing made everyone a little uneasy. The congregation didn't really seem to immerse itself in the liberating hymns of Saint Ravidas, who once dreamt of Begumpura, a utopia ridden of all inequities. Rather, far more temporal aspects of coexistence, like political tensions with the Sikh clergy over a dispute about the holy scripture, churned the rumor mill. At the langar hall and the spacious patio outside the sanctum sanctorum, a few educated adherents bellowed in deep baritones, stoking the mood of revolt and disillusionmentâ€”Ki Khalsa? Ae ki Khalsa-Khalsa kari jaande ne? (What Khalsa? What's so great about Khalsa anyways?).

So, when I queried a jet-setting katha-vaachak (storyteller) of Shiromani Gurdwara Parbandhak Committee, over a chance encounter at Connaught Place last weekâ€”who claimed to have met the jujharu jatha (the agitators, to be read as a hit-squad), responsible for eliminating Rama Nand, somewhere in Europeâ€”why this act should not be equated to irreligious violence, he simply told me that “our patience ran out”. With whom, I wonderedâ€”Rama Nand, or his harangued, simpleminded adepts.

That said, even certain deviating strands of Sikhism don't shy away from highlighting the contestations that this land has romanticized for so long. Far away in Sur Singh (district Tarn Taran), a millennium-old village near the international border in the Bhikhiwind-Khemkaran sector, lies the shrine of Bidhi Chand Chhinaâ€”a soldier-saint who was a contemporary of the sixth Sikh guru, Hargobind. Called the Robin Hood of Majha (the distinct topography covering Amritsar, Tarn Taran and Gurdaspur), Bidhi Chand's rise from a daredevil highwayman to a mighty generalâ€”who once renounced Sikhism and reneged against the writ of the Gurus, eventually to be co-opted by themâ€”archetypes the celebrated baaghi (rebel) that has eternally enamored the balladeers and bards of the region. Like a perfect illustration of anthropologist Joseph Campbell's 'mono-myth', which tracks the transformation of an ordinary mortal to a life-affirming hero, he exemplifies the anti-establishment counterculture that has forever been the cornerstone of Punjabiyat.

The surge of excitement that came from excavating the true legend of Bidhi Chand, miraculously managing to survive only in the collective consciousness of people, is indescribable. His mutiny against the Sikh Gurus; his ingenious act of producing samizdat that posited Nanak as the disciple of the Muslim weaver, Kabir, much to the chagrin of the caste and communally conscious clerics and apologists, who summarily and opportunistically expunged the dissenting portions so that the valuable biography could be brought back into circulation; the way they refused to acknowledge his Mohammedan wife, but chose to endorse the lineage calls for an existential questioning as to how our historical narratives have been given the sartorial treatment under Sikhism. 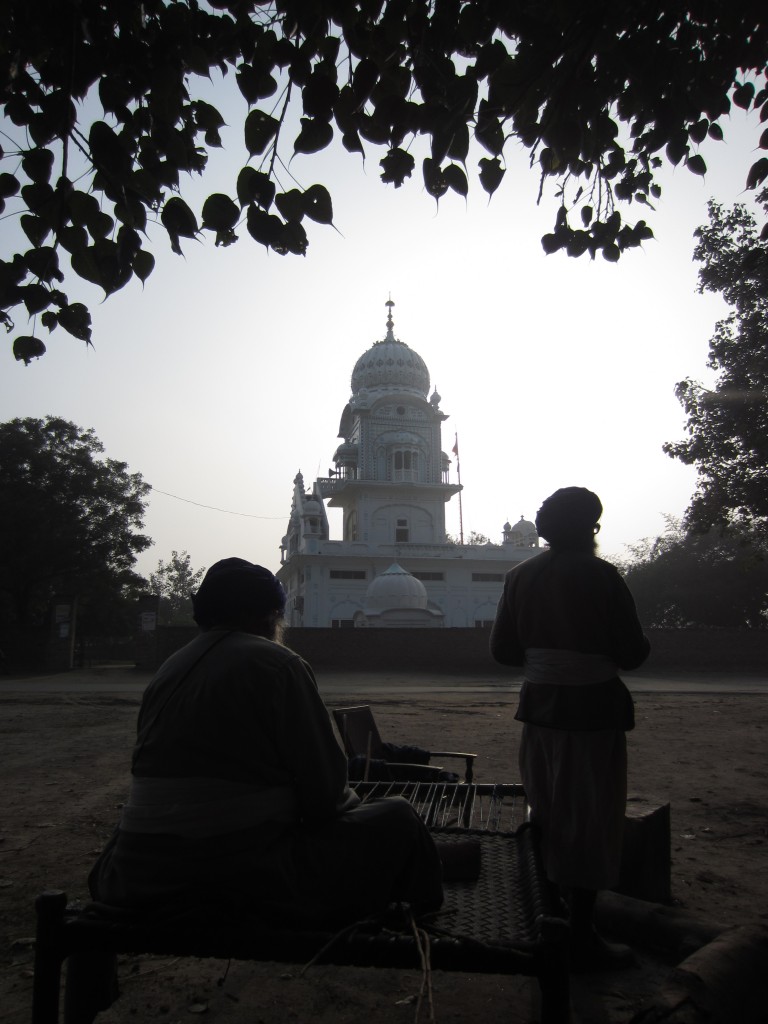 The shrine of Baba Bidhi Chand Chhina with caretaker Nihangs in the foreground.

When cavalries of rambunctious Nihangs from the Bidhi Chand Dal, one of the four battalions of the Khalsa army, descend on Sur Singh for the annual fair, commandeered by Baba Daya Singh, the ninth descendent from the contentious lineage of Bidhi Chand, it remains a spectacle to be seen. The galloping horses of Afghani lineage, the spears whizzing by; the bloodshot eyes of Nihangs stoned on sulfa (cannabis), ravening, as dozens of goats get slaughtered for the evening feastâ€”primal Punjab is at play there. It's another story, however, that this Dal blithely practices caste-based segregation in its seminaries.

For where else will you see syncretism so enmeshed with the tradition that it dangerously usurps or mockingly challenges the conventionalities? An alternate Punjab still manages to exist on the margins, thriving under the shadows of a popular religion whose love sometimes fails to reach the runt of the litter.