At least Mel Brooks is getting the irony here. I don't want to read anything more on the 'Cartoon 2006' issue anymore. Moacir, though, forwarded me David Brooks' column last night. Damn you Moacir.

I imagine that if there is a higher being, she is the most unimaginative being in the universe. The plotlines she plays out here would be unbelievable in a stodgiest of Egyptian soap operas. Someone drew some cartoons of Muhammad and I cannot get the twisted, enraged faces of Muslims off of my tv screen for days on end. Over a 1000 passengers drowned in the Red Sea. Bombs exploded in Shi'a mosques in Pakistan over Ashura. War rages on in Iraq with innocent civilians dying in the name of some god. But, the masses are in the street over be-hurmati-e rasul. And our so-called intellegentsia debate what is lacking in Islam. Oh, they can't understand our precious freedom of speech. Oh, they can't understand our beloved public sphere.

The truth is that the Cartoon 2006 is a big story. Not in the Middle East where it has simply proven the lie behind Bush & Blair's 'respect for Islam'. It is one more desecration to be added to the laundry list of burned Qur'ans. It is a big story in the Western mind. Since the seminal article in 1990 by Bernard Lewis, The Roots of Muslim Rage, we have been waiting for this exact moment. A moment when something fundamental, yet trivial, will expose the Muslim rage and blow the lid off the case made by liberal apologetics. That moment has now come to pass. Say what you will about Islamicate traditions of satire and humor that would put Voltaire to shame; show however many slides of Muhammad through the centuries; there is nothing left to prove. We now have images of insane Muslims burning down building over some scribbled half-assed lines. The case is closed.

I say more in comics after the jump! 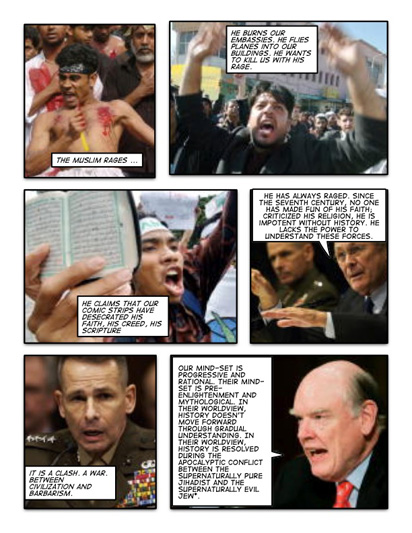 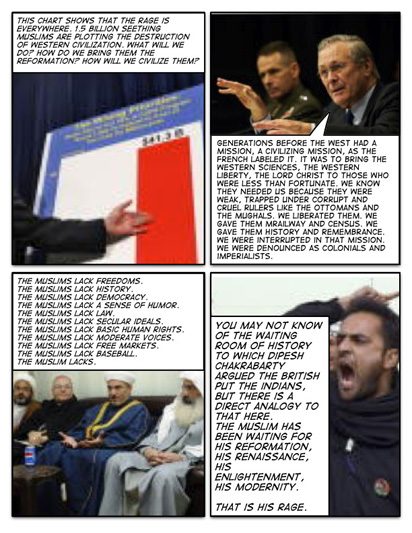 "Not in the Middle East where it has simply proven the lie behind Bush & Blairâ€šÃ„Ã´s â€šÃ„Ã²respect for Islamâ€šÃ„Ã´" -- Am I missing a joke here? I thought Blair, for one, condemned the comics, and that the British press hadn't published the comics - how did you end up dragging Blair in? I've been reading your blog for a while now, and it's normally well-written and reasoned, am I missing a beat here? Pete

I don't think sepoy necessarily means that the comics have proven, in some abstract sense, that Blair's and Bush's "respect for Islam" is hollow. I think he's just saying that *in the minds of some who live "in the Middle East"*, the comics have confirmed a pre-existing belief that all the talk of "respect" by Western politicians is, well, empty words.

These are wonderful. You are too much hero.

In my opinion, we the Muslims should simply boycott buying Danish products until and unless the Govt of Denmark takes appropriate action against this act of humiliation and blasphemy. Denmark's economy is largely based on exporting Dairy products to the Muslim World and a simple boycott will bring them to their knees. The answer to this problem is not in going on the streets in various cities in the Muslim world and being shot at by our own police. The real battle is Economic. PERIOD! Ahmer Azam