Tennessee resident Gary Middleton worries that the mosque could house extremists. "It's just another mosque, training kids to be terrorist," he said.

Stan Whiteway also objects to a new mosque for local Muslims. "I'm sorry, but they seem to be against everything that I believe in. So I don't want them necessarily in my neighborhood," he said.

--From an article about opposition to mosques in the United States, chosen at random from Google News 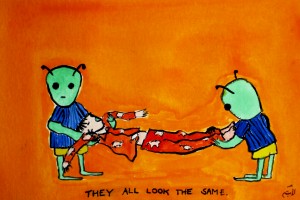 My father calls me at least once a week to ask me if I know anyone who has ever been abducted by aliens. No, I say, I don't. Me neither, he replies, a hint of regret in his voice. My father, a life-long agnostic by belief and eccentric artist by profession, will turn seventy-nine on Friday. Throughout much of his seventies he has been deeply focused on paranormal phenomena and philosophies of reincarnation and the after-life. At first he read Krishnamurti extensively, then it was past life regression and out-of-body experiences, now aliens. His chair in the living room is surrounded by books written by mediums, psychics and other experts on the paranormal. Not for him the second adolescence of retirement communities in Boca and the shuffleboard and sweetheart dances of senior cruises. His preoccupations remind me of the regimen of religious observances favored in India by the elderly, or those we call 'retirees' and 'senior citizens' in the US.

A combination of climate, gender, friendlessness, foreignness and a dissertation that needed to be written kept me often at home at our roof-top barsaati in Allahabad some years ago. Living in a barsaati affords an excellent view of the courtyards and front yards of neighboring houses. From this vantage point, I could see the neighborhood's senior citizens seated in the sun on their respective charpoys, engaging in religious observances. In the courtyard of our own house, our landlady, a Partition immigrant from Multan, sat each morning and read small paperback books of Hindu prayers written in Urdu script. Across the way, a grandfather sat cross-legged on his perch above rows of drying chili peppers, reciting Sanskrit prayers. Another man, next door, often appeared to be napping or peering over the fence to see what the neighbors were doing, but even he spent a certain amount of time in prayer. 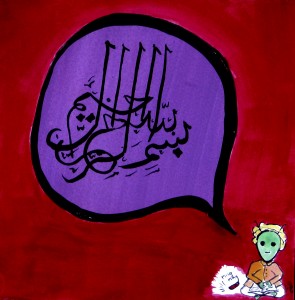 Years later, in Chicago, my dissertation on Hindi literature finished, I was determined to learn to read and write Urdu properly, after years of false starts. A colleague helped me find a tutor. He was from the Indian city of Hyderabad, the retired Chair of Arabic Studies at Usmania University. He was also the Sufi imam of a mosque in the basement of the brick courtyard building where he lived on the north side of Chicago, somewhere around the confluence of Clark and Ashland. As I sat on the floor across from him, reading aloud from Pakistani children's primers, he would nod agreeably and correct me when necessary. All the while he managed from his cell phone the affairs of his flock, fielding calls about problems ranging from the spiritual, to health, to travel to marital counseling.

As an imam, and an Arabic scholar, my Ustad was, with respect to his spiritual observances, many steps ahead of the retirees I had known in Allahabad. Nevertheless, he was not about to give himself a pass. He took particular care to say the Bismillah in its entirety before undertaking any task, luxuriously elongating the long vowels and stopping to emphasize the consonants: Bissssmillllaaaah al-Rahmaaaan al-Rahiiiiim. It was clear from his delivery that he strove with each invocation to renounce the automatic patter of frequently uttered prayers. Before beginning anything, whether it was our lesson, or opening the door of my car when I gave him a ride to his other son's home, he would stop, shut his eyes and then intone, slowly and loudly: Bissssmillllaaaah al-Rahmaaaaan al-Rahiiiiim. The same practice pertained to sneezing, to which he fell prey in Chicago's allergy season: <sneeze> Alllhummmmdulllllaaah.

As his shagird, or student, I was obliged, as much as possible, to help my Ustad, or serve his needs where feasible. This was a perk of which he took only light advantage. Most often, I gave him rides to various nearby points in his neighborhood, especially in inclement weather. One particular special occasion arose during my time with him. This was a visit from his son's in-laws, a retirement aged couple who were coming to the US for the first time, having never traveled anywhere besides India and Saudi Arabia. It was arranged that one afternoon, I would drive the three of them around the city to see the sights. 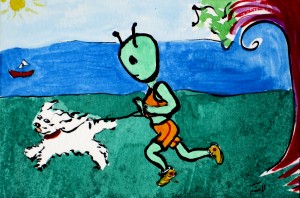 As we drove up and down various Chicago streets, my Ustad pointed out salient details of the city landscape. After a half an hour or so in the car, we were driving down Clark St., toward Lincoln Park. Our guests had been mostly quiet, staring out the windows with that bewilderment one feels in a totally unfamiliar place. At last, scanning the rooftops, the husband remarked thoughtfully, “You don't see many minarets around here.” No one wanted to break the news to him that you don't see any minarets in much of the city, so we talked instead of the subtlety of Chicago's mosques, housed unobtrusively in old churches, apartments, storefronts and basements.

Soon we arrived in Lincoln Park, a sprawling green space along the curved shore of Lake Michigan with unobstructed views of the downtown skyline. Our party made our way slowly along the paths to the shore, dodging joggers, roller-bladers and cyclists. It was a bright spring day, warm enough for Chicagoans to throw off most of their clothing, but slightly chilly for my older Subcontinental companions. They were all three heavily dressed, the men with turbans, long coats, kurta-pajama, woolen socks and lace-up shoes, the wife of the couple in shalwar-kameez under a long, black robe, her hair covered in a black headscarf. We sat for some time as they warmed themselves in the sun, mostly in silence, looking out at the lake and people-watching. After some time, the husband of the couple turned and asked my Ustad with some puzzlement, “Why do so many people have dogs with them?” My Ustad did not skip a beat. “In this country,” he explained, “everyone is separated: child from parent, husband from wife, brother from sister. They all live alone. They keep these dogs with them as companions in their solitude.”

There is something comforting about imagining secret, hidden mosques dotting the landscape - near and far from Ground Zero. I admit.

[...] conversations that started in 2009 continued in 2010: amidst growing alienation, Faisal Shehzad became the face of a “Pakistan native;” Pakistan's originary myth remained [...]