I have been having these vivid dreams. Places and conversations continued from Lahore. Waking up every morning is quite a disorienting experience. The landscapes are stuck, the tape paused. I guess it can all be ascribed to jet lag or to this rather unmoored feeling that envelopes me. Whatever the case may be, I find myself existing, still, in Lahore.

Lahore is an imperial city and often, an impersonal city. It is aloof to most visitors and residents. It breathes around you, moving at a hectic pace here and just somnambulant there. But it has never seemed distant to me or impersonal. I have memories imprinted on almost every nook and cranny of that city of rooftops and minarets. This is Lahore. But, no. That isn't really Lahore. Those rooftops and minarets are but a blink of an eye in the history of this city. It will forget them soon enough.

No, Lahore is much more organic. This has grown, in what must have been once, the widest swath of the flattest earth on god's green world. Perhaps the alley that swallowed it some 80 years ago was itself a stream before that. I don't know. This alley, now, is a long one. The front is used for parking motorcycles and suzuki 80s. The back lies forgotten except for the mechanics who have set up their shops in the shade of the tree. The alley opens to the intersection of Hall Road and Mall Road. The heart of commercial Lahore. Bustling and cacophonous. And it adjoins the H. Karim Buksh Building. Housed in H. Karim Buksh building is the oldest cinema hall in Lahore - Regal Cinema. You saw the spiral staircase hugging the back of the Cinema wall previously. Regal Cinema was founded in 1932 by Kirpa Ram and his partners. It catered to the British crowd and played usually MGM fare. In more recent times, it played the Van Damme classics as well as the Jackie Chan numbers. I remember that there was a bookstore inside the cinema lobby - stocked to the ceiling with pulp paperbacks - horror, spy, sci-fi. The few times I visited it, I left empty handed - afraid that a genteel soul will glance at the lurid cover with which I will leave the shop.

On March 11, the FIA building was brought down by a suicide bomber. The Daily Waqt carried this photo of the interior of the cinema hall after the blast. 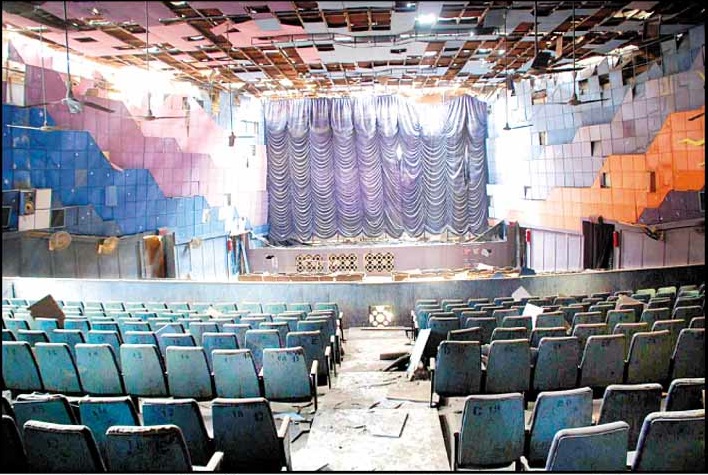 The building was closed when I visited a few days later.

The alley though was open. I looked to see if the blast had left any marks on the tree or the alley. It seemed unconcerned. Lahore had no choice but to recede a little into dreams this time around.

Amazing post.Brought back lot of memories. Our hostels were at Macloed/Hall Road junction, so used to walk to regal chowk through hall road, to Chaman Ice cream on Beeden road or to the burger shacks at the junction of Temple/Lawrence road besides regal cinema. The cinema sometime used to sneek in Blue movies in the middle of regular movie somehow or other students were well informed, recently ther has been a Nirala Sweet on Mall on other side of Masjid-e shuhdaa.

this is still my favorite set. the spiral staircase especially.

What a brilliant set of photos - loved your nostalgic, terse lines too.. I will cross post this on Lahore Nama if that is Ok with you? cheers Raza

Raza: Thanks, And sure.

Love the post and love your nostlagia. Didn't know you were so nostalgic!

Watched an Indian kung fu movie at the Regal. Shame.

Lahore looks exactly like Delhi.My grandmother used to say that Lahore is the most beautiful city in the world. I never believed her but she was right. Thanks for sharing the pictures.I really enjoyed reading your posts esp on Udham Singh and the meaning of chapati mystery.