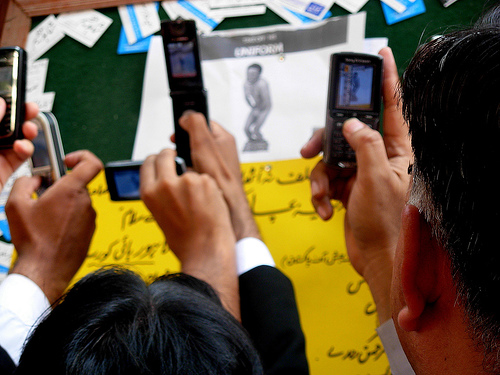 Images via Flickr. The following report is from a source that wishes to remain anonymous:

What happened today at the Lahore High Court, inside and outside, was as disgraceful as it was agitating. The police treated a declared peaceful protest as if the mass (composed largely of lawyers, students and some ordinary civilians) were a herd of sheep. Not even at a herd of sheep would any civilized body unleash such blind rage. Crowds were entirely helpless yet they were being tear-gassed, bulldozed with batons and lawyers were being disgracefully slapped and kicked even while they had their hands raised in surrender to the army of policemen that the state has stationed against all overt forms of opposition.

Also, please feel free to send these pictures along to all possible places, including the press, who were interested in collecting first-person experiences from the site of protest and were also interested in learning the opinions of those outside the judiciary, especially students.

I hope all this media, at some level, culminate into a large repository that makes a strong statement of awareness on a greater platform and opposition to this absurdity.

Peace to you and yours. I hooked up through Al Jazeera by the way. It looks like there a lot of Brave and erstwhile people in Pakistan. Unlike here in the U.S. It may be years from now but sooner or later we will reap what we have sown. Musharraf needs to go. I do hope that the will of the Pakistani people prevails. Peace.

[...] are still going out to protest after being beaten up by state goons, and they and journalists are using their cameras and the internet to bypass new censorship and media laws that make it a crime to criticise the [...]