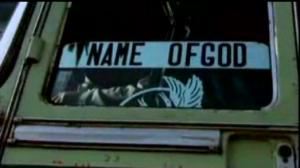 Thanks to Moacir, I watched the documentary Kabul Transit. Eschewing the usual talking heads approach - or even much of a linear narrative at all - it allows us to follow some people in Kabul for short periods of time. An entrepreneur, some government officials, some Canadian force members of NATO-ISAF, a yunani physician, some Kabul University students, either tell us directly what they think, what they remember and what they see in Kabul or we learn it from their conversation with others.

It is a powerful work, though it takes a while before you sink into that world and I am undecided on whether the lack of narration and the lack of some explicit structure hurts or help. As someone who knows a little bit more about the history and languages of Afghanistan, I was soon immersed but the people I was viewing with had a harder time contextualizing what was on the screen.

In the Director's Statement, David Edwards concludes: "Kabul is an ancient city in which one is continually made aware of how the past shapes the present and intimates the future. History in the film had to seem to emerge out of psyche and experience, as it does when one lives in a place. We vowed not to impose a history upon the place as is done so often in many documentaries...Our goal was to allow insight to emerge out of experience, to reveal rather than describe, and to listen rather than speak."

Well, sure. I agree. But, there are happy mediums. Since the documentary is indeed geared towards US audience, I don't see any good reason not to, at least, locate their audience. Tell them what year it is, or why we only see Canadians giving out shovels and building sewage, or how much history lies buried in the rubbles of Kabul. As it is, the people remain nameless even - we only learn their names in the credits - and their personal histories unknown, except for those that share them. The camera obscures far more than it ever reveals.

In any event, it is something that you should try and catch. You can buy the DVD at their site. There are some clips that didn't make the cut, and best of all, here is Alexandr Rozenbaum's amazing Monolog Pilota - set to the best sequence in the whole documentary.

I know little about Afghanistan, but I really liked Kabul Transit (saw it late last year). The approach is "different" but, I thought, definitely does it well. I can still remember individual characters and scenes conveyed in fantastic, captivating detail. All it asks for is your active attention. I agree that might be offputting to some, but I also have to admit I have a hard time understanding some of your criticisms, like the bits about the film being geared toward "US audiences" ("others" might see it too? and have different reactions even in the US?) and lacking "personal histories", hiding more than revealing, etc. Well, true, though one could say that of most films, including documentaries. I guess I don't really see how it connects to this one, but then again, I should see it again, lots in it to discuss. Either way definitely worth watching.