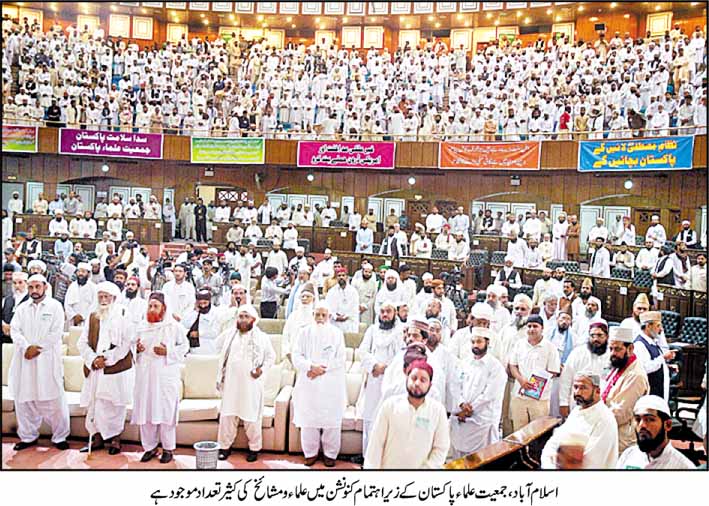 Above is a big hall full of bearded Muslims. Not just any Muslims, but members of the Jama'at-e Ulema. They are gathered, and this is where it becomes a little scary folks, to condemn the Taliban. I know, right? Apparently, this has been going on for some time. At this particular gathering, they denounced the Taliban, agreed with the Swat operation and demanded that Sufi Muhammad be tried as a traitor. They announced a new movement: "Go Taliban Go America" (how you like that association?). They even asked that the Baluchistan crisis be solved (politically) and stressed that the Army stop its insane killings in Baluchistan.

Now, I point this out merely to demonstrate that just as all "Taliban" are not created equal, all "Mullah" aren't either. The bad news, of course, is that they continued to support the Pakistani army and continued their call for a "Nizam-e Mustafa" (the order of the Prophet) in the country. Suuure.

Huh. You know what I like about life? The more you pay attention, the weirder it gets.

five out of seven isn't bad, i guess. speaking of civilian movements: http://www.nytimes.com/2009/05/19/world/asia/19trash.html?pagewanted=1

The bad news, of course, is that they continued to support the Pakistani army and continued their call for a “Nizam-e Mustafa” (the order of the Prophet) in the country. Suuure. Sad but true. But it's the other way round Army supports them to destabilizes civilian governments. Even Zia's spiritual son (Nawaz Sharif )misused by Army but in present situation free media will pave the way for democracy and hopefully Nawaz and other non PPP leaders learn from their mistakes and wouldn't rely on Army again.

The key thing about this gathering is that it was organized by the JUP, which means that the ulama in attendance were largely from the Barelwi orientation. Given that, their condemnation of the Taliban and of radical militancy (which also targets the religious institutions of the Barelwi, Shi'a, Sufis, etc) is hardly very surprising. The Deobandi groups refused to participate. The English press is very bad at picking up on these distinctions.

Hi, Would it be possible for someone to give a quick explanation for the uninformed on the difference between what the JUP is asking for (Nizam-e Mustafa) and what the TSNM wanted in Swat (Nizam-e Adl)? Thanks!

What, no historical perspective? "Ulama and Mashaikh conventions" were organized by the British starting in the first world war and were a regular feature whenever the state needed some mullahs for hire. This practice continued after partition. The JUP has long since become irrelevant in Pakistani politics (currently, not even one seat in parliament, if I am not mistaken). They are also barelvis and have their own beef with the salafi/wahabi/deobandi whatever. But the crucial element is the state. If the ISI wants an Ulama and Mashaikh convention to support Indian rule in Kashmir, they will invite the same people and get them to sign on the dotted line. I do agree that this is still a good idea. Propaganda is a necessary part of war and though these guys have ZERO traction in the jihadi world, they will serve to convince some members of the elite that the battle in Swat is not against islam, since some islamic looking guys on TV were supporting it. That is about all it means though...

"The JUP has long since become irrelevant in Pakistani politics (currently, not even one seat in parliament, if I am not mistaken). " How many seats do the 'Taliban" hold in parliment?

Re: "The JUP has long since become irrelevant in Pakistani politics (currently, not even one seat in parliament, if I am not mistaken). " I disagree with the import of this comment, for a couple of reasons: 1. I imagine sepoy did not reference this gathering for its parliamentary/electoral relevance, but for its cultural/"hearts-and-minds" relevance; the point being that this sort of gathering lends cultural authenticity to the anti-Taliban ideological struggle (whether it IN FACT does or not, or whether these chaps will be seen as clerics-for-hire, or just as Barelvis settling scores, is a different question. But the answers to these questions do not turn on the JUP's strength in parliament). 2. To not have a seat in parliament is not the same thing as to be politically irrelevant. Let's take an extreme example: the Pakistani army has no seat in parliament.

PS-- nor is this sort of thing confined to Barelvis. The Dar-ul-Uloom at Deoband in India has issued a number of pronouncements condemning suicide attacks, terrorism, violence against civilians, over the last few years. Indeed, during the Indo-Pak peace process some were even requested to travel to the NWFP in pakistan to explain to Taliban-types why this sort of thing was not consistent with Deobandi tenets as the Dar-ul-uloom understood them. [That these missions don't seem to have worked tells us either that Deobandi tenets are susceptible to multiple interpretations; or that "settling" theological questions is not going to get very far in combatting a movement that, while it sees itself as religious and political, is not reducible to theological niceties. Likely both.]

There is a thorough discussion of the current situation in Swat in this evenings' BBC Global News Podcast. The threat to the Pakistani state is emphasized, but so are the complexity of the "Taliban" movement and the widespread popular opposition to the "Taliban". Gotta give the BBC credit for in-depth reporting. Global News Podcast 21 May 09 PM 11:44-20:19 site w streaming audio: http://www.bbc.co.uk/podcasts/series/globalnews/ download: http://downloads.bbc.co.uk/podcasts/worldservice/globalnews/globalnews_20090521-1657a.mp3

Neither the taliban nor the pak army have any seats in parliament. But then, neither is interested in even asking for such a seat. That is not their nature. These are armed groups and they project their power by more direct means. But the JUP is a political party and has been for 60 years. They did have a few seats for a while (Noorani, and that person from mianwali). Now, they cannot even win a municipal election. I think that means something. The Jamat Islami (to give a counter example) has seats in parliament (NA as well as senate), and till a few years ago had an elected mayor in Karachi. And beyond that, they have very powerful trade unions and student unions. JUP has neither. I agreed with the "cultural/hearts and minds" comment but tried to hint that the audience for this "hearts and minds" thing is mostly a certain section of the pakistani elite who want to paper over the contradiction between their supposed allegiance to Islamic superpowerdom ("pakistan islam ka kilaa, jihad fee sabeel illah) and their current elite interest in standing alongside the US embassy in a war against those fighting for the "purest version" of this Islam ka qilaa. The demographic who are not impressed at all with these ulama and mashaikh conventions is the Islamists: the kind of people who are seriously working for an "islamic state". Just go around and check if the local islamists are impressed with this collection of beards and islamic leaders....what I am saying is "these people have no street cred" among the islamists. ...And very little credibility in any other large segment of society. Still, they have some propaganda value overseas and among the elite (our friends and cousins, the ones who are NOT islamists but are "normal"). To that extent, they are worth the effort...

Fair points omar, your clarification is helpful. [Off-topic: the Jamaat probably won that mayor seat in Karachi only because the MQM boycotted that election; the next time around, even though the Jamaat mayor was praised for the good work he had done, he was beaten, as the MQM did not repeat their boycott.]

"Just go around and check if the local islamists are impressed with this collection of beards and islamic leaders,," I don,t think impressing other Islamists would be the goal of this gathering and your analysis may be close to the point on military providing room and board, as Zia Ul Haq regularly had Shura meetings which less or more looked like this . One way of looking at this picture is to show ,how superficial it is for the modern media to put a picture of ferrocious looking bearded males and caption it any way they like. While ignoring those who do not fit the bill. I am afraid that someday the media here in USA might be running this picture with the caption "Taliban take over Parliament bulding in Isalmabad"

I second Faiza. This is just getting more dirty... sectarianism in its true essence unfortunately...

RE: " just as all “Taliban” are not created equal, all “Mullah” aren't either. " "Qaradawi's Revisions" by Mark Lynch http://lynch.foreignpolicy.com/posts/2009/07/09/qaradawis_revisions

Look at these Brits, legitimizing the Sharia Courts “You really need to ask why. What advantages could that possibly have for them going to an Islamic court? Any [Sharia] court is going to be implementing aspects of a law that runs contrary to British law, because of the way it treats women for example.” http://business.timesonline.co.uk/tol/business/law/article6721158.ece