[To mark the Indigenous Peoples' Day at the University of Michigan, Ann Arbor, student and community activists organized a march. The march was followed up by a teach-in to connect Michigan's Indigenous history with said march. Following is a report on the march. Next up will be a report on the teach-in.] 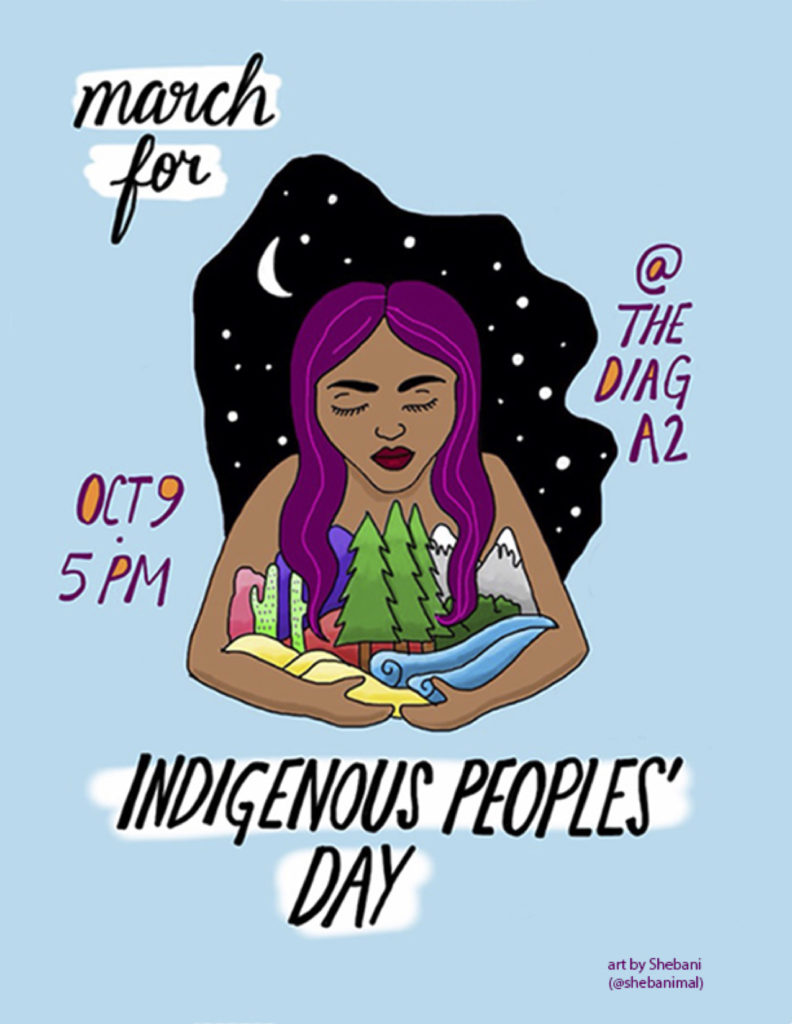 This has been a particularly tense Fall at the University of Michigan (UM). From racist incidents, graffitis, and flyers, to the agitation against recent visit of Charles-bell-curve-Murray and the organizing and protests afoot right now for the likely visit by Richard Spencer--the campus is abuzz with discontent and activism. UM honors its greats with buildings named after them: James Angell, the architect of the anti-Chinese immigration Angell Treaty of 1880; the president of American Eugenics Society, C.C. Little; the anticommunist Harlan Hatcher, while ignoring that this campus, and the city, has had a long history of activism and resistance and a tradition of creative protest that's alive and well. 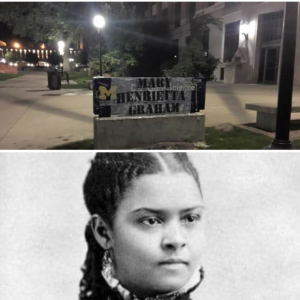 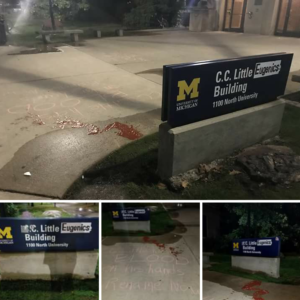 The Indigenous Peoples' Day--the University, unlike the City of Ann Arbor, still recognizes it as Columbus Day-- went unmarked last year at UM. But, this year, a coalition of students and community activist groups and individuals organized a rally, supported widely by others who helped with the crowd-sourced printing of flyers and the zine (drafted to pass around at the march), flyering, and blocking traffic on the day of the march. 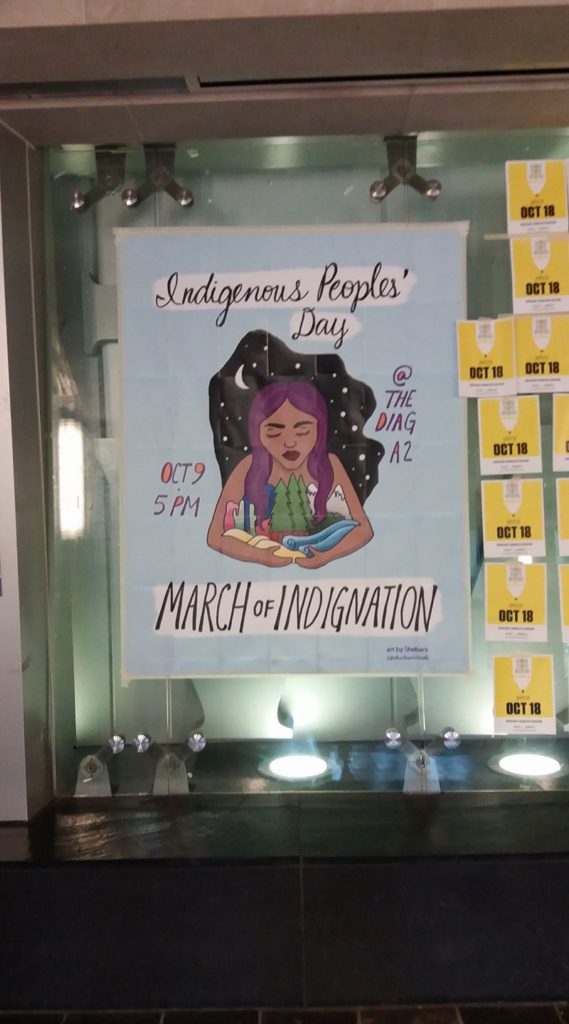 The Indigenous Peoples' Day: March of Indignation was designed as a historic “marching” tour, to sound-out an Indigenous Peoples' history of UM, to remember and remind, to re-signify the landscape and familiar landmarks of the campus. UM is built on land gifted by the Odawa, Potawatomi and Ojibway people for the education of Indians. A plaque at a central location on campus commemorates the "Land Gift". However, Proposal 2 limits affirmative action, in effect prohibiting the provision of equal educational opportunities to students of color. And yet, as the zine (see below) says, "this state law does not supersede the nation-to-nation promise made in the Treaty of Fort Meigs."

The march sought to center these demands drafted by Indigenous students with the campus organization, Students4Justice at the University of Michigan:

We demand a formal recognition of the university's unacceptable history with Indigenous people (specifically the University of Michigan's relationship with Anishinaabe people), followed by a commitment to reconciling. This includes the 1817 Fort Meigs Treaty, michigauma, and so forth. 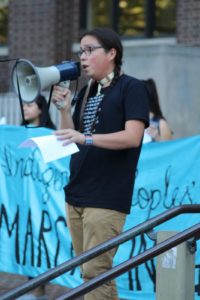 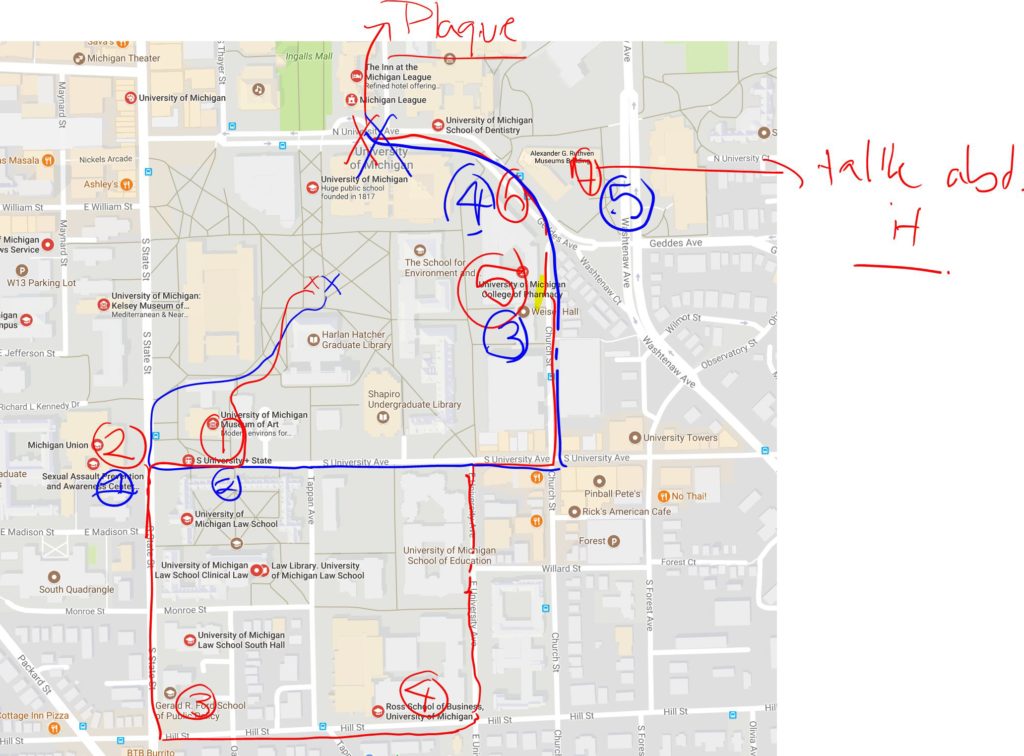 With beautiful hand-painted banners at the head of the march, we started at the diag, went on different buildings within the university and had brief speeches at these buildings. At the President's house, we remembered how the University has not delivered on its promises, namely, the recognition, recruitment and retention of Indigenous persons. At the Student Union we talked about Michigamua, a university-based secret organization that appropriated native-American names, used items and paraphernalia imitating them, and conducted vandalism. Michigamua was later renamed as the Order of Angell, and held an office space in the Union's tower for many years. In 2000, the Students of Color Coalition took over the union and Michigamua's offices in a 37-day action. The Union has been the site of Native student's decades' long battle with the racist legacy of Michigamua. From there, the loud march chanted slogans like "No More Stolen Lands! No More Stolen Lives!", "No Pride in Genocide!" , and "No Borders! No Nations! No Settler Occupation!" through Ross Business School all the way to the CC Little building. At CC Little, the speaker talked about the legacy of Eugenics and the Brown and Black women victimized by racial science, and demanded the university to rename the building. The rally ended at the Plaque of the Land Gift with an Indigenous ceremony of remembrance and prayer. 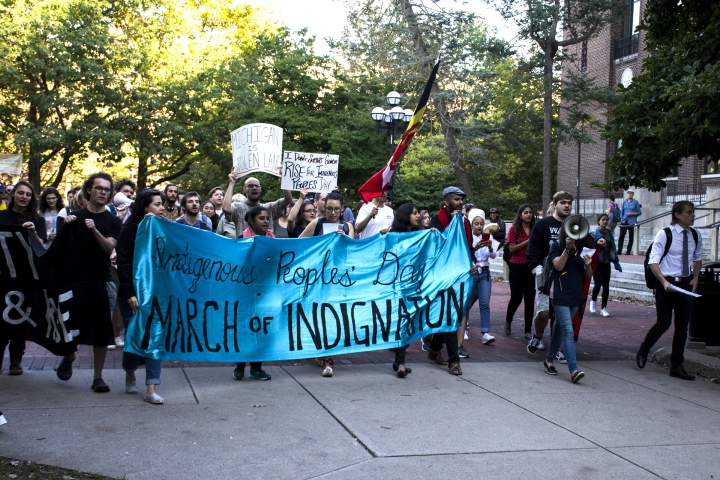 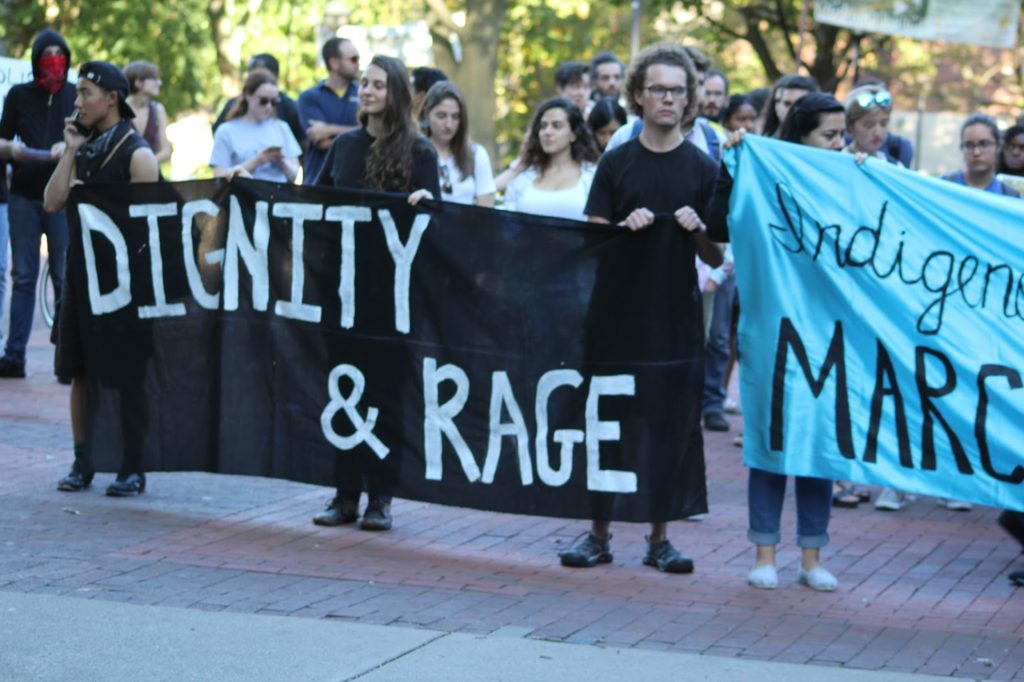 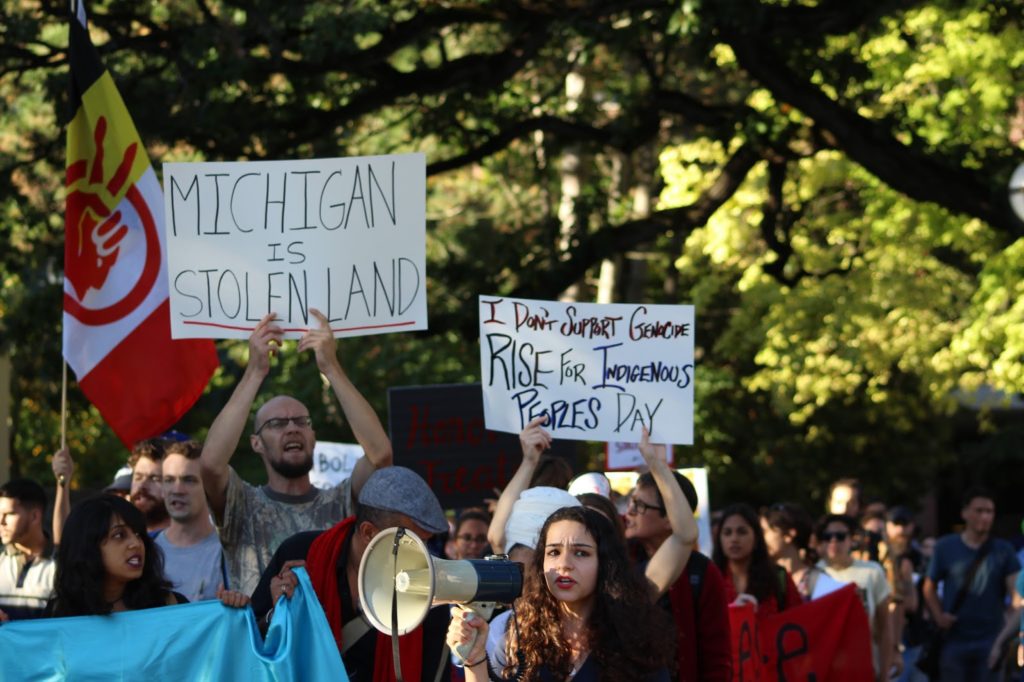 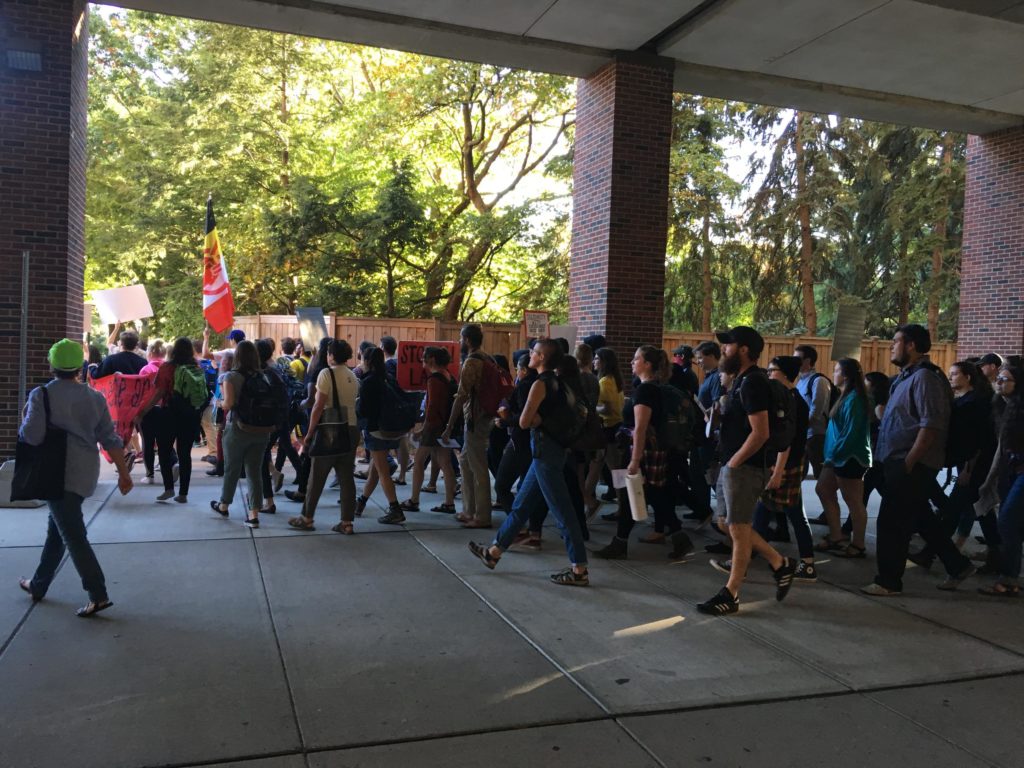 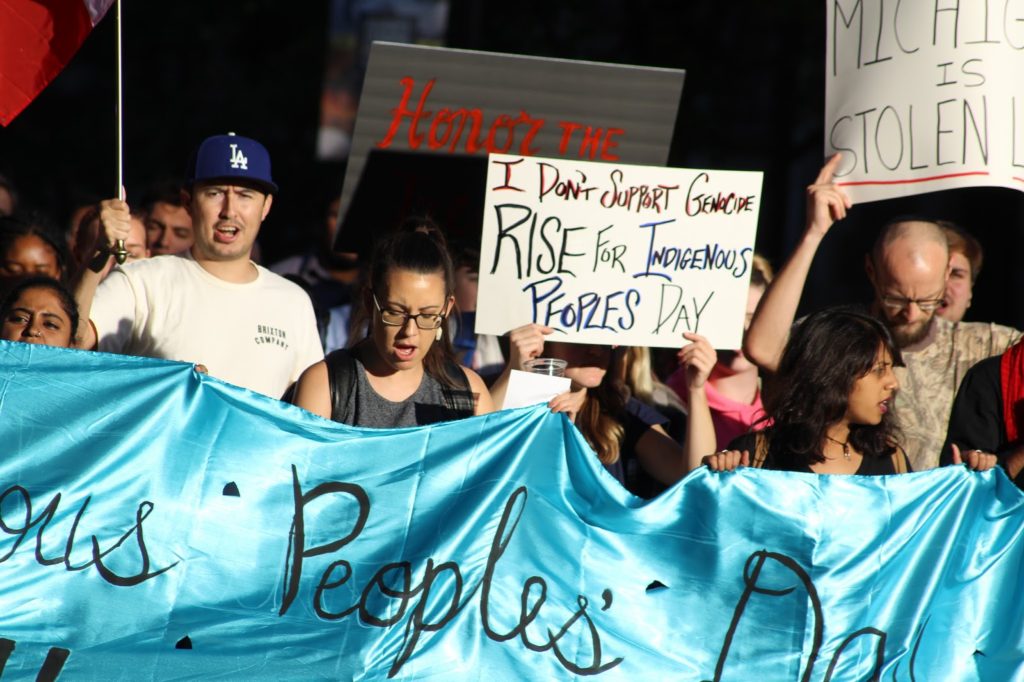 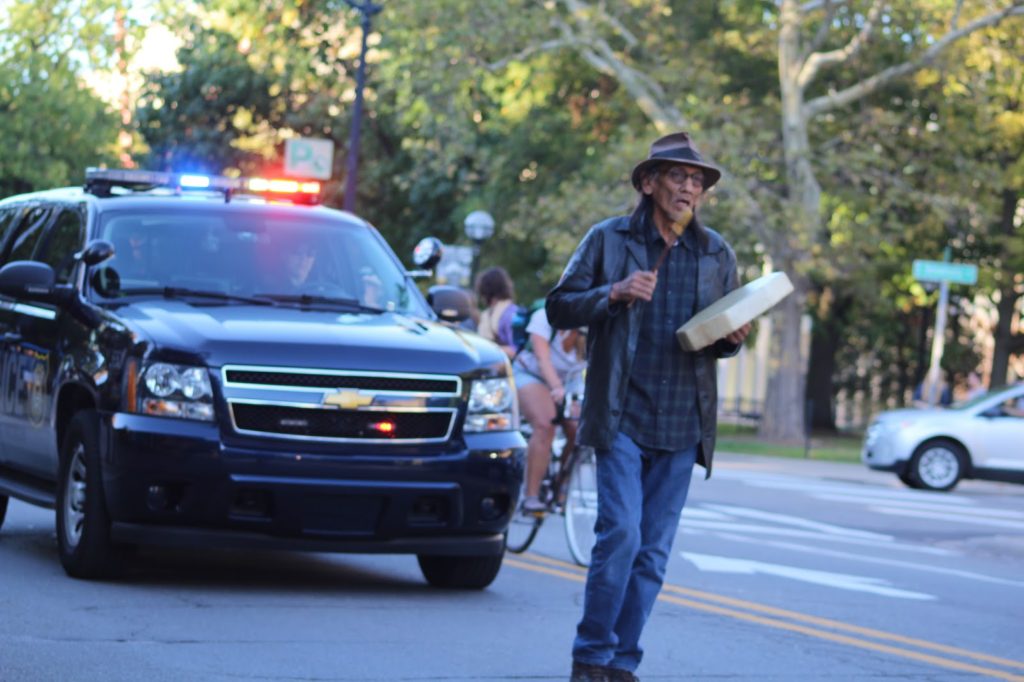 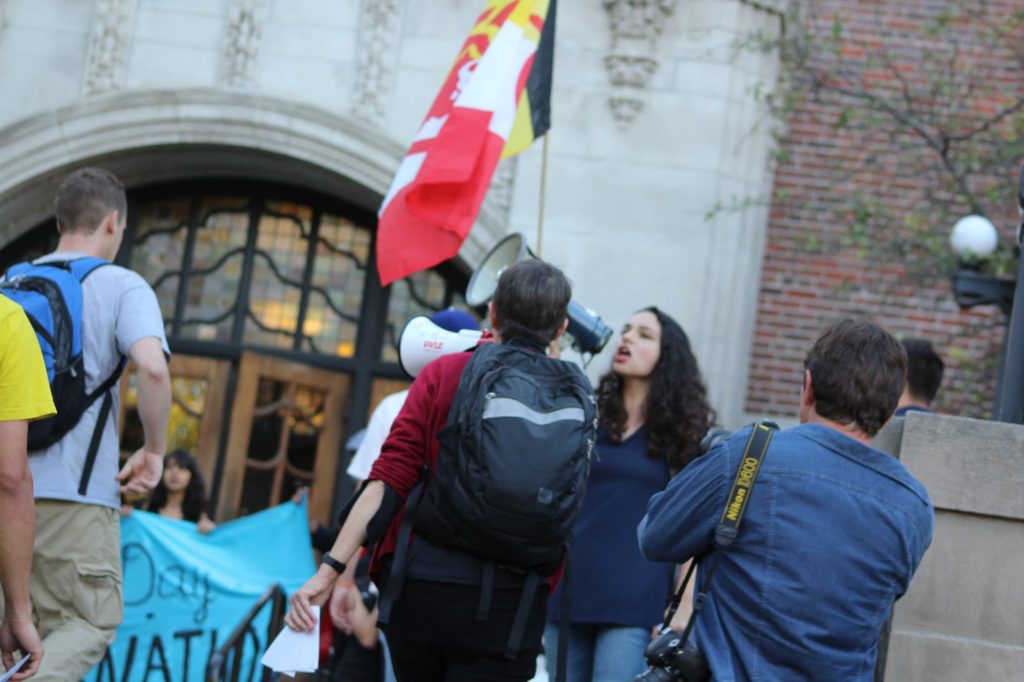 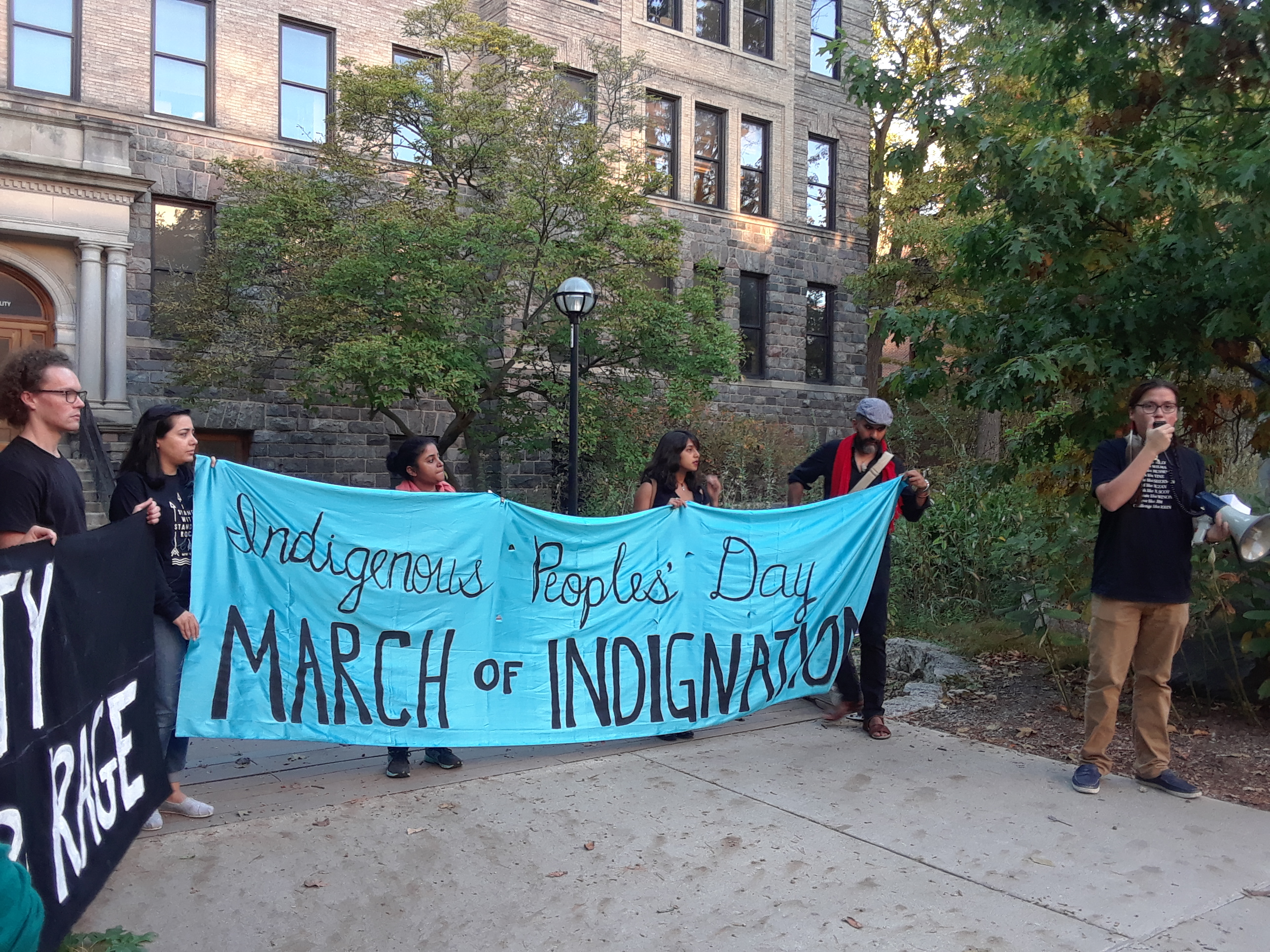