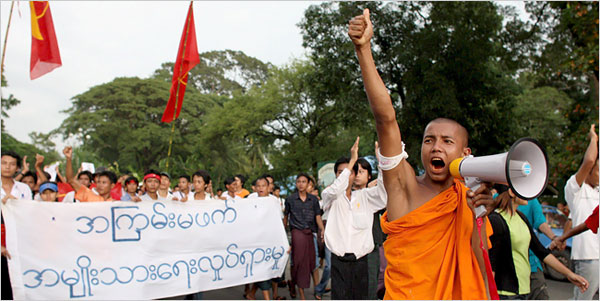 Somewhere the lights of spring have surely appeared
A few collars, in the garden, have surely shredded

The dark ink of night remains still, but
Some colors of dawn have surely appeared

The desert is still a desert, but from you bleeding feet, Faiz
Their thirst, a few thorns have surely quenched

The voices of open dissent raised against the military regime in Burma represent a test for the international community as much as the will of the Burmese people.

I would also recommend James Mawdsley's The Iron Road: A Stand for Truth and Democracy in Burma - a truly inspiring work.

At this rate, you can soon have your own translations of Faiz a la K C Kanda...Faiz: kal, aaj aur kal. Which of the translators do you think do a good job of translating Faiz: Agha Shahid Ali, V G Kiernan...?

There's a petition at Avaaz that's worth signing. I don't know what else people can do, aside from making noise. Apparently some monks in exile will lead a protest at the UN this afternoon. We are getting very bad news from inside the country nowâ€”raids on the monasteries, live ammunition fired into crowds, and unconfirmed reports of a many people killed in Mandalay. For those interested in more news: http://www.ko-htike.blogspot.com/ http://www.irrawaddy.org/ http://www.burmanet.org/news/

abir: I prefer Agha to any else but I often find myself nitpicking this or that choice he makes. Still, it is far greater a job than I can ever manage. e: thanks for the links. I added the Avaaz petition.