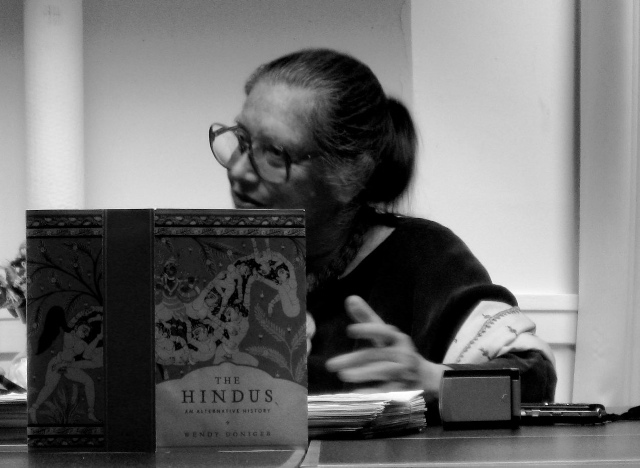 It seems like only yesterday that I was present in Foster Hall for Wendy Doniger's book launch. After I posted on it on CM, a healthy discussion happened, to which Wendy graciously responded. The generosity of her response showcases her unmatched pedagogic spirit and how, with humor and humility, she has shaped our collective understanding of the past.

In the aftermath of Penguin's rather shameful decision to pull the book from India, a number of responses have emerged. I happen to concur with EPW's take.

Below is a statement from some of her students at UChicago, to which CM adds its name:
ï¿¼This statement expresses the views of the individuals listed below and does not represent the views of the University of Chicago or any of its departments.

We, the undersigned, as students of South Asia, strongly condemn the withdrawal by Penguin Press India of Wendy Doniger's The Hindus: An Alternative History from distribution in India. We believe that this work has been attacked because it presents a threat to orthodox Brahminical interpretations of Hinduism. We believe that this attack is part of ongoing attempts by upperÂ­caste extremist Hindu forces to stifle any alternative understandings of Hinduism. As students in the United States, we are acutely aware that North American organizations of the Hindu right initiated the protests against Wendy Doniger's scholarship. Hindu right wing organisations in India have worked in tandem with their North American counterparts to suppress alternative voices in India and too often violently. We are deeply concerned about the alarming increase in attacks on any academic study of Hinduism that does not fit these groups' narrow and exclusionary vision of Hinduism which is part of their desire to create a Hindu India that excludes the religious minorities of Indian Muslims and Indian Christians.
Wendy Doniger, a respected scholar who is devoted to the study of Hinduism, has astutely recognized the great danger to human life and the plural practices and beliefs of Hindus posed by these groups. She has courageously refused to bow to their pressures to curtail her scholarship and has consistently challenged the Hindu right. By tracking the formation of myth through history, her work undermines these groups' exclusionary claims on the past.

As researchers we know that a singular narrative of Hinduism, as of any living tradition, is completely untenable. This incident is indicative of the genocidal imagination of these groups that seek to extinguish the idea of a plural and secular India. This attack on Wendy Doniger's scholarship is reminiscent of the earlier attacks on the scholarship of AK Ramanujan carried out by Hindu fundamentalist student organisations. We protest the rise of majoritarian narratives that curtail different ways of knowing the world and urge scholars, researchers, academics and people of all persuasions to call for Wendy Doniger's book to be brought back into circulation in India. We join others who have articulated their protest against the withdrawal in refusing the singular, elitist and exclusionary imaginings of the past that are used to do violence to our shared present.

ridiculous step has been taken by penguin india!!

Shocking capitulation before a fringe group.

A foreshadowing of the dark days ahead!

scandalous attack against the freedom of scholarship

The unfortunate decision by Penguin in India is not obnoxious but against the freedom of free speech, and one suspects the the publisher did this to please the emergence of rightist politics in India

I read words like "Brahminical interpretations", "hindu forces", "right wing" etc etc and knew this was plain propaganda. Some of the most impressive, original and authentic study on world religions come from community forums and bloggers. IMO, these authors who publish their million dollar books are a waste to mankind. The world is no longer handicapped to these few people in the industry who decide what and who to publish. Knowledge can no longer be kept handicapped by rich publishers. The internet and its billion people community will triumph slowly and surely.