There is a recessed walkway leading up to the side entrance of a building which bears the plaque that Albert Einstein worked here after moving to Berlin in 1914. EhrenbergstraÃŸe 33 was also his first residence in Berlin from March until November 1914 - following his divorce he moved to the hip part of town near Fehrbelliner Platz in Wilmersdorf. He probably walked or biked up BriennerstraÃŸe 9, on his way to work, where the Ahmadis built the first mosque in 1928. I am sure he noticed a mosque going up within a five minute walk from his residence. His third residence in Berlin was in SchÃ¶neberg near Bayerisher Platz. These three residential areas - Dahlem, Wilmersdorf, SchÃ¶neberg - had a significant Jewish population. The plaque noticed that Einstein never returned to Germany after leaving on a trip to the United States in 1932. Before he left, he would have seen the rise of anti-Semitic propaganda rags of Goebbles in Berlin - Gau Berlin and Der Angriff - which operated precisely during the time that the party was banned in Berlin. In the pages of Der Angriff were the anti-Semitic cartoons of Hans Schweitzer.

My office is just a five minute walk from EhrenbergstraÃŸe. I used to live two minutes from Fehrbelliner pltz and I live now, very near Bayerisher. As I noted in my earlier post, these are the very areas in which anti-Turkish, anti-Muslim posters have appeared. Today, I saw scores more - this time for the NPD party (Security, Rights, Order):

Have a nice flight home. Here is a better version so that you can see the cartoon - "a Turk", a hijabi woman and "an African". 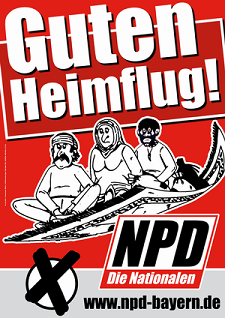 The NPD is the neo-Nazi party and this particular campaign was protested against last year as well but, more recently, they have upped the controversy.

Seeing these posters, near my place of work, near my residence, makes me angry. I seethe. They are affixed high above the ground, and I cannot pull them down, and I cannot deface them. I stand in front of them, and I see no one else stopping. Everyone just walks by. Two of these are in front of an Indian restaurant in Dahlem. The waitstaff just shrugged and told me that the elections will be over soon when I asked them about it. Berlin was their home.

As I mentioned last time, the Jewish experience in Berlin, the hatred, the killings, the deportations echoes through every step here. The spectral remainders of the lived lives which surround those of us now in Berlin, also invoke in me a deep, deep unease, and a rage when I see these posters.

I don't know how to get rallies started.

Here in Zuerich, ahead of national elections, the notorious SVP is stirring the debate (and yes people notice and take offense) with their poster that asks for a stop of foreigners entering their country (black boots treading their flag). It's placed to be noticed immediately on the major trainstations and airports and even shocked me again when I returned from Austria this summer after a 1 year absence - http://www.tagesschau.sf.tv/Nachrichten/Archiv/2011/09/20/Schweiz/Zuercher-HB-soll-nicht-mehr-mit-SVP-Plakaten-zugepflastert-werden#/1 But people have taken an active sabotage stance against it and you can order stickers online to paste over the text partially to ridicule it (http://www.halts-maul.ch/index.php/kleber - not the fake Aldi poster further down). And these ridiculed posters are now so common in the city I was quite confused (one can debate the counter-campaign's effectiveness). Make no mistake, the SVP is not the NPD and is not insulting foreigners as human beings as appalingly as the carpet-poster. Also the sentiment goes against all foreigners (against Germans, Austrians - no matter). It's just to show that potential counter-action is there.

While not as extreme as the posters displayed here, I remember being struck by the number of right-wing, even anti-immigrant posters in Lausanne when I was there for a business trip a few months ago. I didn't have a camera with me, but they were clearly associated with a political party -- and suddenly (to "borrow" a moment from If You See Something, Say Something -- I) the city seemed other, less genteel than it otherwise had...

[...] Sepoy, Farangi, and Lapata delighted CM readers, as did discussions of Imperialism and racism (I, II, [...]