A few weeks ago, I visited Hamburg's vast harbors and storage houses. There, I saw the faded signs of an old network of traders from Iran, Afghanistan and Kashmir who came to Hamburg in the 1880s and 1890s bearing carpets and artifacts. I loved that part of Hamburg, and I wished I had had more time to talk to some members of this old Muslim community.

There are parts of Berlin which also evoke past entanglements. The Ahmadi mosque in Wilmersdorf - the oldest in Germany - is an example. I wrote about wandering onto it a while ago. Since then, I have learned a lot more about the post-War Turkish immigration to Berlin, the Muslim (Turkish, Desi, Arab, Iranian) communities in Kreuzberg, in NeukÃ¶lln, in Wedding, in Charlottenburg. I met families of Sikhs and Punjabis from Ludhiana who have been in Berlin since the early 1970s. I met East Pakistanis. I met PPP jaiyallas still in hiding from Zia ul Haq. Berlin, as it has to many before me, only begrudgingly unveils its seductive charms - and one of its charms has been its matter-of-fact diversity.

And just as matter-of-factly, it shows its racism. When I was vacating my last apartment - in the quite white, old (as in the demographic), rich kiez of KuDamm, I spent an epic 28 hours scrubbing the apartment clean for the landlord's inspection. The tenure in the place was about 16 months and there was very little wear and tear. Yet, during the inspection, the landlords acted in a ridiculously rude manner - at one point saying that only "animal-like Turks" could live like this.

In my new place in SchÃ¶neberg - a neighborhood I absolutely love - my 80 plus year old neighbor looked me up and down.
"Are you Turk - your name is Achmet"
"Actually, that is with a D, not a T but, I am from Pakistan"
".... Pakistan?"
"India"
"Ah! I used to know an Indian. Yes, you are much too dark to be a Turk."

I was quite happy that we had settled the matter and a few weeks later, I bumped into her again. She began to tell me about the building, the neighborhood and while describing the 1950s and 60s life, she quickly inserted a comment about how those were the days before the "African and Turk" families couldn't be seen on the street. Afraid that my German comprehension was not up to par, I repeated after her and she elaborated that the Africans started moving into the apartment buildings around us in the late 80s and early 90s. Haven't I seen them?

These encounters are, however, not the same. While the old landlord was definitely a racist, my new neighbor simply belongs to a world view which is restrictive around class and color lines. I can't begrudge this casual prejudice to the old and the infirm. And sometimes, I feel that Berlin as a whole has a similar outlook - a casual prejudice against the auslÃ¤nder (outsider) be they white or green.

A couple of weeks ago, a group of us brown/semi-brown, over-educated people found ourselves at a "progressive" bar, Kirk Bar, in Kreuzberg at 2am. Even before we entered the largely empty establishment, the bartender stopped us and denied us entry because we were "a group" and they had "enough groups" there. The heated conversation that followed confirmed that he just didn't like so many obvious "foreigners" coming to his bar. The irony that 3 of 5 in the group were residents, property holders and salaried members of Berlin was completely lost on him. He just didn't want us in there. We left, but not without a bitter, bitter taste in my mouth. Berlin didn't look so charming any more.

A day or so later, near my office in Dahlem, I spied this sign and it stopped me in my tracks. 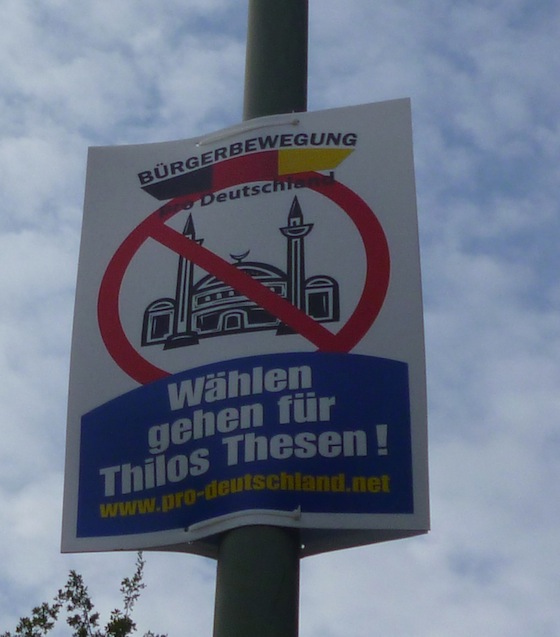 And today, near Blissestrasse stop of the U7, this: 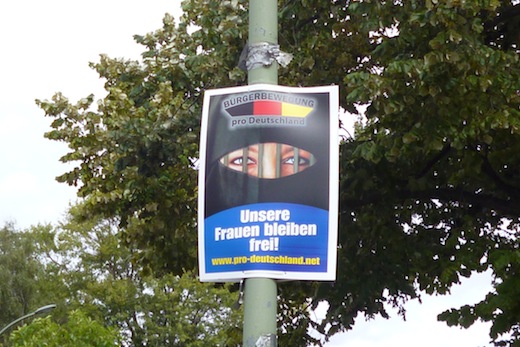 This "pro Deutschland" party is mostly a neo-Nazi outfit (you can read a history of its main slate members here and its activities in Berlin here). It is participating in the upcoming mayoral and city elections in Berlin on a platform of "Zuwanderung begrenzen, Islamisierung stoppen". They explain that the Turkish immigrants have created "Zuwanderer-Ghettos" in Berlin where they hope to begin a "parallel" society to install Shar'ia laws. Manfred Rouhs, who is heading the pro-Deutschland ticket is a neo-Nazi organizer with a long list of "gegen Islamisierung" activities.

The rise of Islamophobia and anti-Muslim immigrant and the close relationship between the US based ideologues such as Pam Geller or Daniel Pipes and their European counterparts such as Geert Wilders is quite well established. The actions of Anders Behring Breivik in Norway illustrate one outcome of such hatred and fear-mongering. Berlin, with its sidewalks dotted with "stolpersteine" (stumbling stones) detailing the forced removal and execution of its Jewish citizens, reminds us of another historical outcome of hatred fed to a supplicant mass.

These signs don't just offend me. They frighten me.

http://www.spiegel.de/international/germany/0,1518,779032,00.html i guess u saw this ?? here the combination is race and religion. since i dont share my impressions on germany or anything else publically, will send thru on email. best s.z.

"Some of these foundations and wealthy donors also provide direct funding to anti-Islam grassroots groups. According to our extensive analysis, here are the top seven contributors to promoting Islamophobia in our country: Donors Capital Fund Richard Mellon Scaife foundations Lynde and Harry Bradley Foundation Newton D. & Rochelle F. Becker foundations and charitable trust Russell Berrie Foundation Anchorage Charitable Fund and William Rosenwald Family Fund Fairbrook Foundation Altogether, these seven charitable groups provided $42.6 million to Islamophobia think tanks between 2001 and 2009â€”funding that supports the scholars and experts that are the subject of our next chapter as well as some of the grassroots groups that are the subject of Chapter 3 of our report." This is an interesting report . http://www.americanprogress.org/issues/2011/08/islamophobia.html

what about similar lists in india and pakistan? we too have hate groups who get a lot of funding.

Wow! Is that Akbar, the doctor sahib? It's been a long time since you last commented. Btw, I'm sure you must have seen it in your copy (ahem), your name made it to the Acknowledgement section of the CM book.

You've seen the "Guten Heimflug" posters, I assume? http://www.freies-netz-sued.net/wp-content/uploads/2010/07/bayernnpd-gutenheimflug1.png For me, they are even more frightening than the Pro Deutschland ones for abandoning the fig leaf of some idea of "liberal" opposition to Islam for pure grotesque race-baiting. On lamp-posts all around Zehlendorf and Dahlem, right up to the FU campus. The satirical group Die Partei has launched a counter-campaign against the current NPD campaign, matching the NPD's "Pedal to the medal!" (Gas geben!) slogan with images of JÃ¶rg Haider's fatal car wreck. http://www.spiegel.de/politik/deutschland/0,1518,781410,00.html

UGH. I had not seen these.

On a much less dark note, have you come across this? http://www.berlin.de/ba-charlottenburg-wilmersdorf/bezirk/gedenktafeln/erani.html Right off the Ku'damm, a plaque commemorating the fact that one of the founders of the Iranian Communist Party, Taghi Arani, lived there in the 1920s. It seems his status as a founder of the Tudeh Party is disputed but I did like this tidbit I found online: "So complicated were Arani's articles that the government initially perceived the material as non-threatening."

Oh yes, it is right near to the literatur hans and quite prominent. I tipped a beer at the spot.

These guys in Europe were supposed to be strict on hatespeech but such poster against the mosque is tolerated. One hopes that things will change positively in years to come. Reading the post I was also filled with anger over the incident at the bar. Is there no system to lodge a complaint. At least put the name of bar on your post and its picture so that they might someday get a lesson....

Looking at the socio political environment of the west these days, putting its name on your blog may benefit it.

[...] Lewis Pardoe’s Historian Daily); Sepoy reports on Islamophobia and the German far-right at Chapati Mystery; and Paul Harvey on “Fear Itself: Literary Reflections on 9/11,” which has even more [...]

[...] used to live two minutes from Fehrbelliner pltz and I live now, very near Bayerisher. As I noted in my earlier post, these are the very areas in which anti-Turkish, anti-Muslim posters have appeared. Today, I scores [...]

[...] Mystery has a pair of posts on anti-Turk, anti-Muslim sentiment in Berlin, with startling [...]

Sad piece (loved the evocative pics on Flickr)... I could really relate to this: "These encounters are, however, not the same. While the old landlord was definitely a racist, my new neighbor simply belongs to a world view which is restrictive around class and color lines. I can't begrudge this casual prejudice to the old and the infirm." ...in the sense that I've felt the same way about (e.g.) the mother of a Tamilian Brahmin acquaintance who just won't eat in the home of a non-veg person. I've been familiar with the type my whole life, and can never think of this under the "sign" of racism -- whereas I've encountered more than one American of Indian origin who does view it through the prism of racism (and likely haunted by the legacy of racism against African-Americans).