As you can see, I am a magnificent horse. Proof of my magnificence lies in the fact that I was presented as a special gift to First Lady of the United States Jacqueline Kennedy by Field Marshal Ayub Khan in 1962. During the First Lady's resplendent tour of South Asia, she was presented with many fine gifts, including me (Sardar), an elephant named Urvashi (presented by the Nehrus), and two baby Bengal tigers (presented by Air India) whom the First Lady had planned to name Kitty and Ken after Ambassador John Kenneth Galbraith and his wife. I say she had planned to name them Kitty and Ken because they perished before they could be shipped to the United States from India. Clearly I was the most suitable gift of these as the First Lady was an equestrienne nonpareil and I was successfully brought to the state of Virginia in the United States so that Mrs. Kennedy might enjoy my company as much as possible.

I know what you are thinking. You are thinking, "You say you are magnificent, but you are only half a horse! Where is the other half of your body?" This is an excellent question. As it happens, I am actually a painting of a horse, representing a particular horse, named Sardar, that existed in history. My photograph was taken in Virginia in the company of the First Lady and Field Marshal Khan, and an artist has rendered that scene in a triptych. During the course of this rendering, the artist has made certain stylistic decisions, causing me to be only half a horse in her painting, though I remain a full horse in the original photograph. This decision was no doubt made because, in the style of miniaturists of old, she did not wish to make the animal larger than the two great human leaders also present in her painting, yet, bound by the duties of a perspectival painter in the Frankish mold, she was not able to bring herself to make me a very small horse in proportion to the First Lady and the Field Marshal. Thus, I have become half a large horse.

As befits any momentous event in human history, as well as those timeless tales of old that perhaps once took place in the ordinary lives of every day men and women, such as the story of Leila and Majnun or that of the travails of Princess Diana, the wondrous tour of South Asia undertaken by Mrs. Kennedy, or Jackie O, as she is also known, has been documented on many pages and even upon the medium of celluloid. As it happens, another artist, one from the country of France, accompanied Mrs. Kennedy on this tour, and created many intricate paintings depicting many thrilling events during that time, but neglected to capture the apotheosis of the journey, the gifting of a horse (me) to Jackie O.

Those paintings by the French lady are collected in a small volume called Mrs. Kennedy Goes Abroad that includes an introduction by former Ambassador John Kenneth Galbraith, for whom a Bengal Tiger cub was nearly named until it met with an untimely demise, being a less suitable ornament to the First Lady's person. As Mr. Galbraith recounts:

The American embassy residence in new Delhi was then under construction; our dwelling was too small so we had requisitioned nearby accommodations. Nehru held them to be inadequate and moved Jackie and her sister, Princess Lee Radziwill, to rooms in his own house. This was not a simple act of grace: Meeting her at the plane and seeing her later, he was enormously attracted and wanted to see more of her, which as the visit passed he did.

For many chroniclers, it was Mrs. Kennedy's wardrobe that caused the most excitement. The ne plus ultra of the trip was for many that little pink dress she wore in Udaipur. In an article on her fashions during the trip, a reporter from Life magazine recounts many interesting tidbits:

At the start of her journey to India, Jacqueline Kennedy expressed the hope that her trip would not turn into a fashion show. But despite her best efforts, her every seam has been the subject of hypnotized attention from the streets of Delhi to Khyber Pass. By the time she reached Pakistan, an official release was describing her as "the best-dressed woman in the world.” whether or not she was wearing a hat or a hair bow or a belt took on international importance. An Indian lady correspondent timidly asked, "Would it be impolite to mention in my story that she is not wearing stockings?" 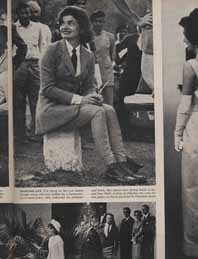 The most dogged of the clothes-watchers in her press entourage have now counted 22 different costumes as of the end of her stay in Lahore. She has worn only two things a second time. The rare "repeats" are greeted with the joy of a bird watcher spotting a prothonotary warbler.

Among the statisticians of the trip there are even counters of shoes, one school holding that she wears the same pale cream ones and has them cleaned, and the other holding she throws them away like Kleenex.

Surprisingly, although one may well imagine bearers staggering under a load of 16 trunks, Mrs. Kennedy actually travels with two large footlockers plus six assorted smaller suitcases. Her principal secret weapon is her maid, Mrs. Providencia Paredes, who is always so discreet that she is nearly invisible-- so much so, in fact, that the Kennedys almost left Vienna last spring without her. Mrs. Paredes carries a steam iron wherever she goes and wields it with extraordinary skill.

The utmost discretion has been observed about the Kennedy coiffure. 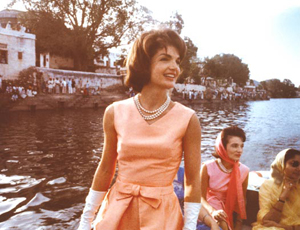 Throughout the safari, as the rest of the females in her party grew gradually rumpled, then wilted and finally vanished in a pool of butter like the tigers in Little Black Sambo, Mrs. Kennedy's flowing tresses survived an overnight train ride, two boat rides and two weeks of one-night stands. Through all this her hair looked precisely as it had the day she left. This is obviously impossible without aid; the finger of suspicion in this delicate subject points to Mrs. William Laton of New York City, listed in the party as Princess Radziwill's maid and secretary. There is speculation that Mrs. Laton keeps a hair dryer in her typewriter case.

The most impressive part of Mrs. Kennedy's dress, however, was the visual impact of the colors she chose for each occasion. A French artist who is a member of our troupe remarked, "She must have studied terribly carefully. Every dress she wears becomes a marvelous spot of color, like the bright spot that holds your eye in Persian miniatures. The pale apricot silk she wore for the boat ride on Pichola Lake was wonderful against these pink-tinged castles in the water."

One of the most noticeable side effects of Mrs. Kennedy's wardrobe has been its influence on the traditionally dowdy female press corps. Two lady reporters are now carrying, in addition to typewriters, hatboxes, containing wigs, and three take notes while wearing little white gloves.

Personally, as a familiar of Mrs. Kennedy, I must say that it is not the penchant for haute couture which makes the lady, but her exquisite manners and charming personality. As you can see from the paintings recently completed by the artist who has rendered my half-portrait, the First Lady was a sparkling conversationalist and was able to put her interlocutors at ease, whether they be a military dictator, a prime minister, her sister, or a horse, such as myself.

Brilliant, no doubt. Still, Sardar Sahib, I waited in vain for any light you might shed on those oh-so-fine chaps worn by Field Marshall Ayub Khan. Perhaps, you can illuminate us now?

"ah, the good old salad days," when we were green with innocence, and us darkies knew nothing of things thermonucleic, and fundamentalism was more likely to be understood as meaning a return to one's roots (on either side of the Radcliffe line)

[...] This post was mentioned on Twitter by Azmat Khan, Daisy Rockwell. Daisy Rockwell said: @KhanumBilquis another perspective on Jackie K's trip to Pak (+review of My Name is Red) http://bit.ly/aUxbqp [...]

[...] I read a post on Chapati Mystery regarding Jacqueline Kennedy’s visit to Pakistan in 1962. The whimsical post was inspired by a painting of a horse which was a gift to her from Field [...]

The Little Book of Terror launch and art opening in Philadelphia | February 01, 2012

[...] Subcontinent. Dedicated CM readers will recognize this series instantly from my old but gold post I am a Horse. These paintings have never before been shown outside of the internet! And to top it all off, the [...]