I am posting these remarks written, and made, in another time (March 04, 2020) on a panel celebrating Prof Rashid Khalidi’s The Hundred Years War on Palestine: A History of Settler Colonial Conquest and Resistance, 1917-2017 at Columbia 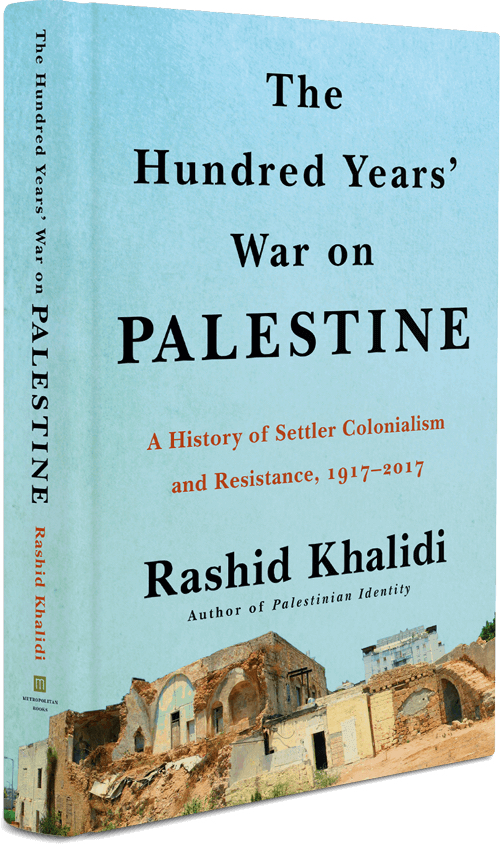 I am grateful for this opportunity to reflect on Prof Khalidi’s critical work today. I want to lay out a few of the significant aspects of this work for all of us to consider–which are many, but I will list four, with a aspirational fifth.

I want to start with the author himself. Across his previous seven major monographs, the large number of articles, his editorship of the Journal of Palestine Studies, he has brought archival depth, intellectual rigor and deeply ethical commitment to speaking truth against the injustices of the Occupation. So the first significance is that this is a work that takes a broad, synthetic overview of a hundred years in the history of Palestine, by an author who has written the definitive histories of nearly every decade in said hundred years, starting with 1906-1914, which he covered in his dissertation and first publication in 1980.

The second significance, is that this work importantly re-frames the “hundred years” of Occupation as “a colonial war waged against the indigenous population, by a variety of parties, to force them to relinquish their homeland to another people against their will.”^[p.9] This is a matter of historiographic and political importance. Khalidi shows a persistent colonial project, captured here from the exchange between Yusuf Diya and Theodor Herzl, in 1899, to the recent Trump-Kushner plan. The continuity matters, both politically and analytically. It shows resistance and it shows persistance (modes of being denied to the colonized). The first peoples of North America did not disappear in a ‘whisper of breath’ as Adam Smith put it–in fact, they blocked passenger and freight travel in Canada in Feb 2020 protesting the construction of the pipeline through the Wet’suwet’en territory. They did so at Standing Rock in 2016. To put it simply, the hundred years’ of Palestinian struggle becomes visible most clearly within a framework of 500 years of resolute and ongoing indigenous struggle against European colonialism. Khalidi’s foregrounding of the role played by British, Soviet, and US in consolidating and maintaining the Zionist colonial project helps make this historical and historiographic case.

The third significance, I find as a reader, is the linking of the history of Palestinian dispossession and resistance to the Khalidi and ‘Isa families. The generations of memories, lived histories, and intellectual leadership glimpsed in this volume provide a particular testimony that undergirds the hundred years–we see the prescience of Yusuf Diya, ‘Isa al-‘Isa, Dr. Husayn al-Khalidi, Ismail al-Khalidi, Walid al-Khalidi, and the sustenance of Mona Khalidi and Rashid Khalidi. These are not only witnesses to the colonial project, but agents of resistance, of warning and of rebuilding.

Throughout this work, we see the paperwork of colonialism, the reports, the declarations, the resolutions. What Khalidi notes about Security Council Resolution 242, can be held true for any other moment: that it added “a whole new latyer of forgetting, or erasure and myth-making,” that it produced further “amnesia that obscured the colonial origins of the conflict between Palestinians and the Zionist settlers.”^[107] The resolutions and the plans, the agreements and the slogans that enabled the silencing of memories and histories. As Khalidi notes, after 1967, “the very word “Palestine” was almost unmentionable” in the US. Yet, the book oriented me, as well, to the task of the historian, the project of the documentation, the family library, the family homes.

In my first reading of the book, I remember yearning for more and more of their voices, their memories. Personally, I was most impacted by the chapter “Fourth Declaration of War, 1982,” which is a harrowing read. We see how close Mona Khalidi was to the bombing and while Khalidi manages to insert a humorous quip about Beiruti driving in his recounting, I could only imagine myself as a father, rushing to find and protect my children.

It is in Beirut, Khalidi writes, that the project of history and memory intersected as an agentive project of writing: “I was witness,” he writes, “to an important resurgence of Palestinian political agency. Writers and poets both throughout the Palestinian diaspora and living inside Palestine–Ghassan Kanafani, Mahmoud Darwish, Emile Habibi, Fadwa Touqan, and Tawfiq Zayyad, together with other gifted and engaged artists and intellectuals– played a vital role in this renaisnance, culturally and politically.”^[p. 109] And not just the Palestinian writers.

I was reminded of Faiz Ahmad Faiz, who was in Beirut from 1979 to 1982 and whose poems Eik Tarana Mujahidin-e Falastin kay naam (A song for the Palestinian Fighter), Filastini Shuhada Jo Pardes Mein Kaam Aaye (Palestinian Martyrs Who Died in Exile), and Mat Ro Bachche (Don’t Cry Child) were well cited in my own house in Lahore.

Faiz in Beirut, also brings me to fourth signification of the work. How reading this intimate family history of a people, brought into relief the world of Palestine from the perspective of the subcontinent. Since August 2018, Palestine and Kashmir are regularly used in the same sentence. This is certainly not new. There is a global history of recognition of the Palestinian people that I grew up. Many of the nationalist leaders of the anti-colonial movement, from Rabindranath Tagore to Mualana Azad to Muhammad Iqbal to Muhammad Ali Jinnah, wrote about the rights of the Palestinians to their land in the 1920s, 30s and 40s. Iqbal would, for instance write in 1937: “We must not forget that Palestine does not belong to England. She is holding it under a mandate from the League of Nations, which Muslim Asia is now learning to regard as an Anglo-French institution invented for the purpose of dividing the territories of the weaker Muslim peoples. The other day 50,000 Muslims met at Delhi and protested against the Palestine Commission.”

I remember Habib Jalib’s poem from the First Intifada. I remember Faiz:

Alongside Faiz, there was Eqbal Ahmad, also writing about Palestine and Pakistan, and Khalidi cites him as particularly astute observer of the global struggle against colonizing forces.

Finally, I am compelled to reflect on this document as its own form of lieu de mémoire. Khalidi ends his book with positing the tough pathways to political remembering and political forgetting that are needed to ensure equal rights for all. For this, he asks the Palestinian people to build on their unusual patience, perseverance, and steadfastness in defending their rights, and to “adopt a considered long term strategy, which means rethinking much that has been done in the past…”

It appears to me, that Khalidi’s own life and scholarship represents one clear manifestation of such a project. The interiority of this particular book, invites me to think, as a historian, of a sister volume… one that begins in 1948 and demonstrates the making of a historian who refused to look away, refused to put anyone on a pedestal. For the colonized, there is no divide between memory and history, between family and archive, between past and the future. The colonial theft of the past, in fact, requires the restitution in memory.