59 years ago, today, the nuclear age of destruction was ushered in by Col. Tibbets and his crew aboard Enola Gay. Little Boy exploded nearly 2,000 feet above the city of Hiroshima. The crew knew at the moment of blast that human future was now tied inextricably to its own means of destruction. 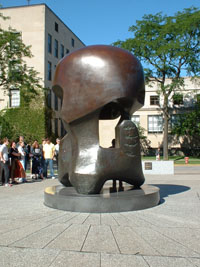 More than 200,000 people eventually perished in Hiroshima. About as many died from conventional B-29 bombing campaigns. It is not in the numbers of dead that the true horror lies. It is the bomb. The power of instantaneity.
A plaque here on Uchicago campus reads:
Physicist Enrico Fermi and his colleagues established the first self-sustaining controlled nuclear reaction in makeshift laboratories constructed under the grandstands of Stagg Field Stadium on December 2, 1942. The success of this experiment ushered in the atomic age opening tremendous potential to modern science.

Was Hiroshima inevitable from that very day?. In On the Natural History of Destruction, W. G. Sebald writing about the Allied bombing of Germany in 1945 says:

The construction of the strategy of air war in all its monstrous complexity ... so much intelligence, capital and labour went into the planning of destruction that, under the pressure of all the accumulated potential, it had to happen in the end.
...
This is the history of industry as the open book of human thought and feeling -- can materialistic epistemology or any other such theory be maintained in the face of such destruction? Is the destruction not, rather, irrefutable proof that the catastrophes which develop, so to speak, in our hands and seem to break out suddenly are a kind of experiment, anticipating the point at which we shall drop out of what we have thought for so long to be our autonomous history and back into the history of nature? p. 65-67

Were Hiroshima & Nagasaki necessary to stop the war? Necessary to save "american" lives? Historians have debated these questions exhaustively. Go there and read selections from Harry Truman's diary, about the Smithsonian controversy over the Enola Gay, and the history of destruction.