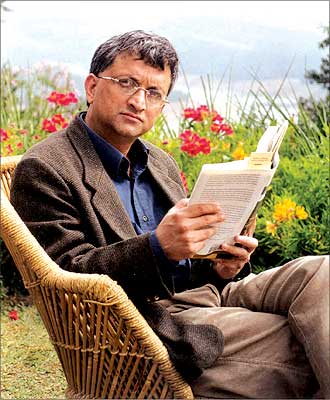 At Madison, Ram Guha gave a thoroughly entertaining talk on contemporary history. It was filled with nice anecdotes, pointed criticisms of "establishment" histories and historians, and a genuinely felt call for new directions in history writing. It was also overly broad, had outdated generalizations, mis-characterized historiographical developments and seemed a bit too caustic. I didn't take any notes during the talk - eager to simply enjoy the spectacle. So, I didn't comment on it here. I don't want to misquote the man.

Thankfully, I learned from Rohit that he had published an article, The Challenge of Contemporary History," Economic & Political Weekly, June 28, 2008, which seems to contain the full text of his remarks at Madison. It allows me to make the one point that occurred to me during his talk.

He writes (and said)

The overwhelming importance in the academy of that single date, August 15, 1947, has led to a paradox - namely, that while India is the most interesting country in the world, we know very little about its modern history. And what we do know about independent India is chiefly the work of sociologists, economists, political scientists, and journalists - not historians. In fact, the works of history, properly so-called, on any aspect of India since 1947 are so few that they can be counted on the fingers of one hand, or, at most, two.

(Footnote: These works are cited at appropriate places in this essay. I speak here only on books in English - as it happens, scholars writing in Marathi have written important works of contemporary history, that is, on Maharashtrian society and politics since 1947. Notably, these scholars - among them Dhananjay Keer, Kumar Ketkar, and Y D Phadke - have worked for the most part outside the academy.)

He didn't read that footnote in his talk. "... [O]nly on books in English" rankled me, as it did the peanut gallery in which I sat. It is no small point to ignore the production of history in Urdu, Hindi, Kannada, Tamil, Bengali etc. etc. Especially, if one's entire argument is on contemporary history. Pakistan, for example, can be cited as a case-study of doing only contemporary history - for reasons entirely political. There are scores upon scores of Urdu histories - some even by prominent academic historians such as Mubarak Ali, Muhammad Aslam, K. K. Aziz etc. And if we really want to just stick with English, go check out GC University Lahore's history faculty. Their bi-annual research magazine, Khaldunia seems to have 2 out of 5 essays devoted to post- 1947 history (3, if you count the Hussain's article). He also bemoans the lack of modern regional histories. Again, if there is one abundance in Urdu/Sindhi/Pushtu, it is of regional histories, be they of Sindh, Punjab, Swat etc. The majority focusing specifically on the modern period. I would venture a guess that the same is true, if we check a bookstore in Mysore.

Next, Guha points out the dearth of biography. But again, only if we (for unknown reasons) stick to English. In his talk he mentions Fatima Jinnah as one individual ignored by historians. He cites that in Ayesha Jalal's book on Jinnah, there is no entry in the index on Fatima. But, here is the deal, Guha ji. Fatima Jinnah has had numerous, numerous, histories and biographies written in Urdu. One on my desk, right now, is Shakir Husain Shakir's "Ù…Ø­ØªØ±Ù…Ù‡ ÙØ§Ø·Ù…Ù‡ Ø¬Ù†Ø§Ø­ :â€ â€Ø­ÙŠØ§Øª Ùˆ ÙÙƒØ±" (Respected Fatima Jinnah: Life and Thought), published in 2003 and a hefty 250 pages. WorldCat lists another twelve titles - all in Urdu, as early as 1963 and as late as 2007. Let's just ignore Ayesha Jalal on this one.

It is "academic fashion" which propels the anglophile US-based historian, according to Guha, to write solely on the colonial period. I won't necessarily quarrel with that. I have said as much regarding the medieval periods. However, one gets the feeling that it is also "academic fashion" which propels Guha's criticism. The site of the contrarian is a privileged site; especially, if one gets to define the terrain. The reality, however, is that the historiography of South Asia is larger than the Bengal-centric Subaltern Studies collective, and it is larger still than the US-based academics. Guha seems more interested in straw men, sacred cows and paper tigers, than the contours of current scholarship - whether in vernacular or in English.

My one point aside, EPW also carried a pointed critique of Guha's essay by Nivedita Menon, The Historian and 'His' Others: A Response to Ramachandra Guha [pdf]. It is an excellent read and Menon takes Guha to task not only on his treatment of feminist historians and history but also on his engagement with history, itself. Less pointed engagements come from Sasheej Hegde, The Demands of Contemporary History: A Comment [pdf], and Nonica Datta, A 'Samvad' with Ramachandra Guha [pdf link]. All worth your time, if you go for such things. Finally, I want to draw your attention to Rohit's Ramachandra Guha's peculiar conservatism which deals more broadly with Guha's intellectual burdens in the recent past.

Rohit's post made me realize that Guha is, in broad circles, the historian du jour - combatively staking out a space distinct from the US-based academics. One is also reminded of his spat with William Dalrymple - which was particularly snarky. There is a certain air of "outsider-ness" that he projects - in his writings, and then, in his talk - from the "in-crowd". Rhetorically, he turns the tables and argues that it is the "other" (Dipesh Chakrabarty or William Dalrymple) who are out of the club while he is with the people. For all I know, it might all be true. Guha may indeed know the soil of India better than those others. He may indeed have the goodness of history in his heart. The only thing I ask, as a historian, is that he present a forthright case without making swift generalizations and side snipes. It is a heavy burden to bear - speaking about the general state of history and history-writing for a complex nation-state and people. But he is the one who chose to do so, not me.

Taking a skewed, contrarian and combative position in all matters including history makes you "readable" and helps acquire an academic constituency. Hedge or Hedge funds are in news these days. Perhaps it explains the typo for Prof Hegde!

The irony is that we know very little about modern Indian history even from Guha's own history of modern India "after Gandhi." Here is a thoughtful review of Guha's "India after Gandhi: The History of the World's Largest Democracy": http://mail.sarai.net/pipermail/reader-list/2008-March/012191.html

Maybe modern history it's not "historical" enough? It's just 50 years away, hard to abuse since many will still remember the times, and less exotic...

[...] Ramchandra Guha (whom I have discussed before) wrote another provocative piece, The Rise and Fall of the Bilingual Intellectual [pdf], EPW, Aug [...]

[...] of political significance. It is also interesting to note that criticisms of non-rigorous work, have been directed at Guha himself; I still respect Guha as a historian [...]