[In this new Age of Orange, we'll be bringing you a series of thought-provoking pieces on the new political landscape (and the same old landscape, as well] 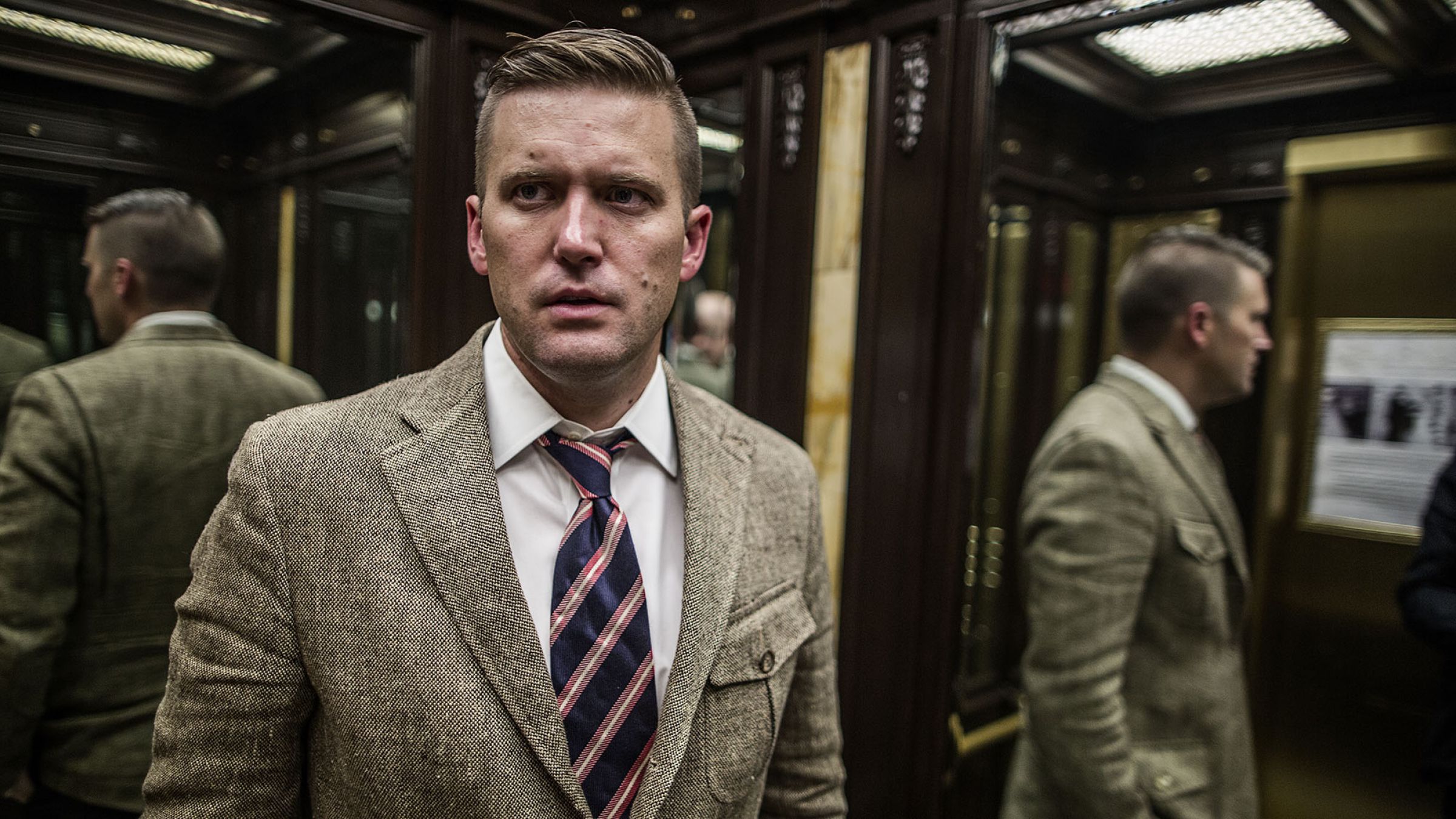 In the aftermath of the 2016 election, media portrayals of white nationalists registered an ambivalent sort of surprise that white supremacists can be both evil and good-looking at the same time. “Meet the dapper white nationalist riding the Trump wave,” tweeted liberal magazine Mother Jones above an embedded image of “alt-right” ringleader Richard Spencer in a Brooks Brothers-esque pose, his blond brows furrowed, gaze alert but disinterested in the camera. Spencer is a statuesque relic of bygone boys' club days, a spitting image of white masculinity pre-every-major-social-movement-of-the-twentieth-century. His stance effects power through a performative indifference we recognize as the “heartbreaker aesthetic,” that styled arrangement of cool masculinity which shrugs and says, “Whatever, you're disposable to me.” (White girls, make no mistake: he'd pull your hair in bed.) The tweet was hastily redacted, but the original Mother Jones report on Spencer endures, as does a more recent CNN portrait of Martin Sellner, “the trendy young face of Austria's far right.” Unlike Spencer, Sellner sports hipster frames, a black turtleneck, and the quiet, intimate gaze of a romantic partner. He exudes a more enlightened masculinity, subtler and soft-spoken. He's probably into sensual lovemaking, emotional vulnerability, and equally shared parenting practicesâ€”so long as his partner shares his commitment to raising the next generation of Hitler Youth. The media's (which is to say, the liberal white public's) faint amazement at the charisma of these men emerges, of course, from the assumption that hate and attractiveness should not be able to cohere in the same body simultaneously. 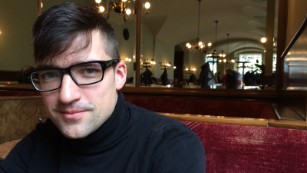 Where does this assumptionâ€”that hateful people should be uglyâ€”come from? It's a familiar refrain, and the discourse in which it traffics is racialized to boot. To give an apt example: When Rolling Stone magazine published an issue with Boston Marathon bomber Dzhokhar Tsarnaev on the cover in 2013, the editors of the magazine were swiftly denounced for “glamorizing” a terrorist. The image Rolling Stone usedâ€”a 'selfie' taken by Dzhokhar Tsarnaev himselfâ€”did not fulfill (white) public expectations of how a terrorist “should” look. By contrast, there was no comparable backlash against magazine covers featuring “brown-ified” portrayals of the Tsarnaev brothers as racist caricatures of Islamic terrorists, suspect and scowling. Asked for her thoughts on the Rolling Stone controversy in a July 2013 interview with OutFront, artist Daisy Rockwell (best known for her portraits of terror suspects in innocent poses) remarked, “To confront the public with the fact that a terrorist could be a nice-looking white boy is highly offensive. Terrorists are [imagined as] angry, foreign-looking men with brown skin and venom-filled Islamic motivations.” Put differently, there can be no such thing as a white terrorist in the white supremacist imagination. It just doesn't compute. 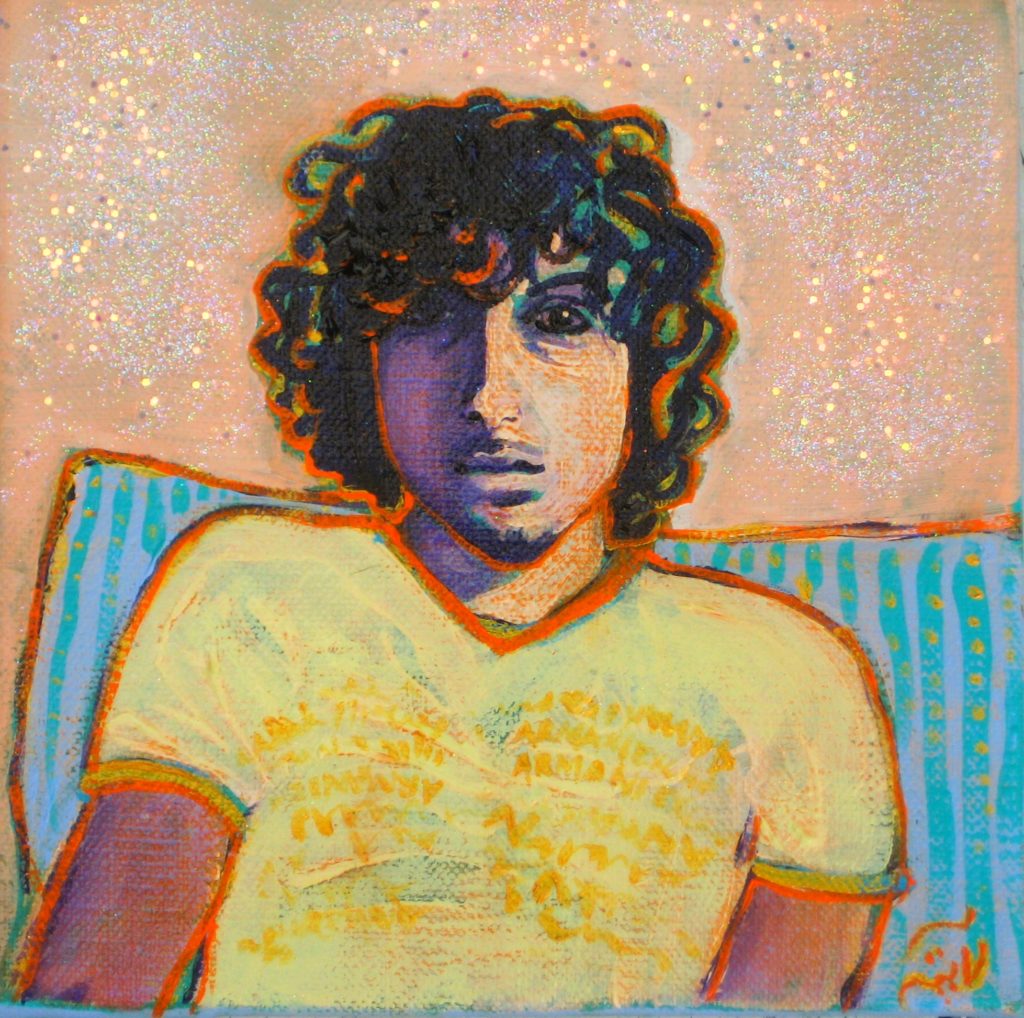 Lapata:
"Dreamboat
When Dzhokhar Tsarnaev, A.K.A. "Jahar," was first shown on the cover of Rolling Stone, a controversy erupted. He was being glamorized, people said, this was not a proper depiction of a terrorist. What is the proper depiction? Well, for one thing, terrorists are supposed to be dark-skinned. Maybe wearing some 'Muslim head garb.' Terrorists, I guess, aren't supposed to be good-looking. This confusion spread to the tween girls set, and 'Free Jahar' groups blossomed all over the internet. He was framed, it was a conspiracy. For both his detractors and his fans alike there was a cognitive dissonance: how could a handsome white boy be a Muslim terrorist?
Acrylic and glitter on linen canvas, 6" x 6."
https://www.flickr.com/photos/lapata/21366648149/

An unmistakable privilege therefore underwrites the “mildly shocked” response, and there is a performative element to shaming the journalists who have written about them (who are not unilaterally white, or women, though white women are necessarily implicated in and indubitably the audience for these diatribes) for describing these neo-Nazis as attractive. What do these disavowals achieve, though, other than to exceptionalize white supremacy? To benightedly insist #NotAllWhites? Swallowing the notion that white supremacy is singularly or normatively the purview of poor, rural, and alienated whites rather than affluent, cosmopolitan, and institutionally entrenched ones requires an enormous draft of historical amnesia. 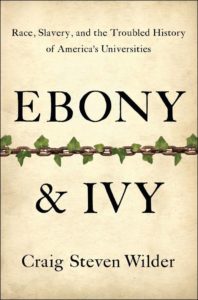 As historian Craig Steven Wilder argues in his sweeping epic of the rise of American higher education, Ebony and Ivy: Race, Slavery, and the Troubled History of America's Universities, American colleges and universities were founded as the “third pillar of a civilization built on bondage” alongside church and state. Wilder contends that American academies of higher learning, fueled by profits from the transatlantic slave trade, were chiefly responsible for shaping and legitimizing scientific racism during the late nineteenth and early twentieth centuries. “As Atlantic slavery underwrote the production of knowledge, it distorted the knowable,” he quips incisively. Given their vested interests in Native dispossession and African enslavement, American colleges and universities didn't benefit passively from colonial violence, but actively forged theories of biological supremacy and inferiority to justify it. As Kelly J. Baker has pointed out, “the alt-right appears novel only if we ignore the continuum of 'intellectual' white supremacy from which it emerged: scientific racism in the 19th and early 20th centuries, the Ku Klux Klan of the 1920s, and the Citizens Councils of the 1950s and '60s.” In other words, the alt-right fails to constitute a genuine scandal because its pretensions to scientific and historical truth are already ideologically and structurally embedded, contributing to the various modalities of white supremacist social engineering and capital accumulation that (dis)organize modern U.S. society and coalesce as the carceral state. Notions of biological, moral, and intellectual superiority and inferiority are already pervasive, constant, and pernicious features of the American imagination. They comprise a well-developed and ever-evolving calculus of human capture, dispossession, and social death, ingrained at every level of American lifeâ€”from classrooms to courtroomsâ€”which functionally limits or eliminates the life chances of groups deemed “undesirable” to a white supremacist nation. White nationalism is already here; it always has been. The rapid expansion of imprisonment and the turn to hyper-punitive prison terms targeting black and brown bodies began after the Civil Rights era, largely due to the Nixon administration's strategic propagation of colorblind logic to defang the Black Power movement's demands on the state and restore order to a riled public in the throes of economic decline after the Vietnam War. (I recommend Keeanga-Yamahtta Taylor's From #BlackLivesMatter to Black Liberation on this score.) The only difference Spencer and his ilk represent in this historical trajectory, really, is a return to more explicit assertions of white supremacy in the face of a mainstreamed neoliberal antiracism which has feigned “progressive” politics for the past fifty years.

Thanks to their uteruses, white women come to play a crucial role in the formation of the white supremacist state. They are potentially mothers with the capacity to “suckle strong and intelligent children,” as a eugenicist tract published in 1889 puts it, and these children in turn will “rightfully” inherit the spoils of a state where whiteness reigns supreme. As Roberto D. HernÃ¡ndez describes, whiteness is a “romance” that promises white women a kind of vicariously experienced power in exchange for access to their bodies and their reproductive and domestic labor. So yes, let's be clear: of course the “new” white supremacists are handsome and smart. They look fuck-able for a reason. It's a strategic move to reboot white terror into the 21st century.

Grace is a PhD History student. She studies race, gender, and labor at American women's colleges at the turn of the twentieth century, and spends most of her days plotting the overthrow of imperialist white supremacist capitalist heteropatriarchy.