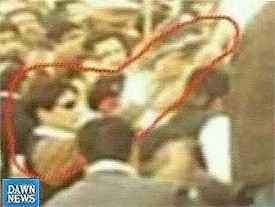 The MSM's take on Bhutto's murder has inspired much wondering on the pages of Chapati Mystery--can they be talking about Benazir Bhutto? our readers ask. The corrupt thief of a billion American tax dollars meant for Pakistan's infrastructure and military? The monarchical heir to power in a supposed democracy? The populist who claimed to speak for the Pakistani masses from her English Manor house? The soon-to-be-installed anti-Musharraf, complete with an earpiece to more easily get Washington's calls? Whose teenage son was judged the most qualified person to fill her shoes, upon her murder?

Who, in God's good name, could these myopic hemi-journalists be lionizing? Certainly not the Benazir Bhutto known by CM's readers, informed, worldly and skeptical, all. None at CM wished her anything but justice, peace and, if necessary, redemption. All are bewildered by the Mother Teresa/Princess Di treatment coming posthumously Bibi's way. The MSM query obsessively: Who did it? How? Why? Who killed this “secular, progressive, populist, pro-western leader?” The answer, as always, lies in negative space. In politics, as in organized crime, as, alas, in life itself, the question of motive, means and identity are often bound up in a benefit, to be later realized, enfolded in motive.

Most CM readers can name half a dozen persons or organizations, not all aligned, wanting Bhutto dead. An agent of one of those groups probably put a bullet in her head, and another in her neck. Her assassin was probably killed by his partner, or a competing assassin, who wore a bomber's vest. Mushie's government has either bungled, interefered, or covered up the facts of the event--likely all three. And none of that matters, because the aim was a destablized Pakistan. The assassination succeeded.

Still, American intellectuals have not yet regarded Bhutto's death per se. They may never, because as she stood exposed to the masses, and in the video holding view of hijab's fatal billow, we see the split head of John Fitzgerald Kennedy, bursting like a water balloon on the exit of an assassin's thirty-aught-six elk-slayer bullet. This began the most fortunate run of assassinations in history, if you had something to lose, that is. In five short years, MLK, RFK and Malcolm X each met a martyr's call, felled by crazed, lone gunmen. By the close of the sixties, we had convinced ourselves that we lived in the only period of history where disruptive change-agents were killed by the mischief of random madmen instead of people who actually needed them to die.

We coined the hypnotic trigger-phrase “conspiracy theory” to limit analysis, serious and otherwise, of the phenomenon. This permitted serious thinkers to continue operating under the auspices of the beast that had asserted itself so bloodily, and to marginalize people who question pronouncements of authority. To do otherwise would be to acknowledge that the United States had suffered a coup d'etat, and continued to suffer further electro-shocks to its public soul. To acknowledge such is to acknowledge the illegitimacy of every U.S. regime since 1964, leaping through the looking glass, to a world where madness is the norm.

That simply does not happen here. It is the sort of thing endemic to corrupt client militocracies like Pakistan, where brown folk run amok, acting a fool. Through perceptions gathered with our Imperious Gaze, we are unwilling to admit that realpolitick is realpsyckology. Our exercises in wish fulfillment belie our claims to have witnessed random acts of history. We know better, but cannot bring ourselves to face the horrible truths of creeping fascism, de facto global corporate governance, and the systematic yoking of vast swaths of mankind, which accelerated after the bloodlettings of the 1960's.

We project the guilt of having ignored our burgeoning peril on those from whom we demand good behavior. In America, it never crossed our minds that a crazed, lone gunman stalked and killed the dear lady, or that the suicide bomber and the shooter were working at cross purposes. Obviously nobody kills an heir apparent without an intellectual and physical cohort; in the unsettled, teeming global south, nothing happens without a reason or a beneficiary.

People of good faith worldwide should agitate for a public airing of Bhutto's death's fleeting facts, as well as the grim facts of her life. We should not give her anyone else's death, nor mourn for her as for another, nor make demands as though she were someone she wasn't. She deserves her own death, though we shall likely never give it to her, not here, not among the annals of western narratives.

It's the rub of our projecting a half-century's disregard of common sense with respect to public violence and the historical context of murderous succession. It causes us to do absurd things, such as demand Kennedy's inquest for Bhutto. We would give the official explanations of her demise the skepticism our own slain leaders deserved and the public accountability our Republic requires, but which we were, and surely are, without the spine to demand.

[...] a glass darkly Posted in Uncategorized by awol89 on January 3rd, 2008 Farangi’s post Franz Ferdinand’s Last Sigh is one of the sharpest rebukes yet on western media’s coverage of Benazir Bhutto’s [...]

I loved the prose but perhaps not the sentiment running thru. Elected leaders can and are often venal. This is so in neighboring India, Bangladesh, Egypt, Turkey, Malaysia and elsewhere. Many politicians in the US have been exposed for corruption in recent times. Probity and integrity in public life take time, practice and vigilance as does democracy. The military mullocracy is perhaps less corrupt but they have no mandate to rule. I suspect this wringing of hands over her venality is what the generals love about the Pakistani intelligentsia.

This post by firangi serves a purpose for ISI and the Military regime. Which country is not feudal? We have Gandhiclan,Gowdaclan,thackerayclan,Mk clan,Badal clan etc etc in India,Bandaranikes in ceylon and the two Begums in bangladesh and in Pakistan itslef the choudhry brothers,nawaz brothers who rule Punjab.This Post also serves the Neocons because they can say that it is pakistani army which is serving the Unity and integrity of pakistan with its nukes. The killing of benazir is not done by this pistol but by a sniper who used a gyro stabilsed high piercing bullet which will not leave any evidence.The area was cleaned by water cannon only because of this and only xray was taken to confirm no fragments remained inside the skull. She was killed by the Neocon supported ISI only because she was showing to the wrold that there is a constituency in pakistan whcih wants roti/kapda/makan and education and security with honour.They are not blindly anti/american as the suit/tie wallahs.She also showed to the firangi types that though WOMAN she had more courage than Musharaff and nawaz and Imran, she had more following in FATA,NWFP,Punjab,Baloachistan and ofcourse Sind than any of the local CHIEFTAINS. Though Shia she had more sunni followers than sunni maulvies.She commanded loyalty of the whole nation and the army generals who were getting american dole were threatened by her popularity inspite of her pro american and pro indian remarks. So they have to assasinate a woman and as an Indian who wishes for close friendship with pakistan i mourn her loss along with right thinking pakistanies.

Drat! Foiled again. Are my ISI sympathies that transparent? And as for being a neocon, well. Anyone who knows anything knows I'm a neocon. Sheesh.