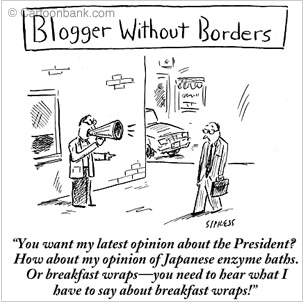 I admit that I find it extremely hard to post here. In general, for a variety of reasons, I have very little energy for anything.

I have noticed that people I used to read 2 years ago, have all departed. Or gone largely silent. To my detriment, I have not found new writers. What gives? Is blogging over, folks? And I just didn't get the memo? Maybe, I can turn to the confessional? Except, I hate talking about myself - yes, even in real life.

Oh, that NYer cartoon is funny.

update: In private correspondence, it was brought to my attention that this post is "depressing." I apologize for any distress or feelings of blue-ness caused to you, my gentle readers. As a palliate, I recommend reading this with sunglasses. [ht: lapata]

That description of "Taste of Cherry" has got to be the only time in my life a one-sentence description has made me want to see a movie. Regarding blogging, I think we sit in an uncomfortable middle-ground between the big-name "skyhook" political/technical bloggers and the LJ/MySpace/FanBoy bloggers. We're blogging about something, and like our publishing cycle, it takes more time and energy to produce product than in a lot of other fields. We have to be patient with ourselves, and we have to convince others to be patient with us.

Manan- CM won meover, previously an avid blog-hater, with its incisive posts. Your cold sighs are scaring me. PS. I long for a good, long post on homistan; it seems like you have been preoccupied with other inconsequential matters, of late.

Farangi's vitriol his limits, believe it or not. As does his calendar and lifehack stopwatch. But I'm gearing up. Sit tight, sepoy.

re: hoopoe's request, I second and amend: how about a comment on the recent realpolitik essay in foreign affairs about the Taliban's resurgence as an agreed upon outcome between neocons and the ISI, who, according to the article, use the Taliban as some sort of irregulars.

yesyes! ..or a "period post" about the conquest of Sindh; or on Bin Qasim?

Interesting blog. Your by-line should read "Where have all the flours gone?"