In the last three years, I have been researching and thinking about a volume of interlinked essays on Lahore - perhaps on the historical "al-Sind". Over the course of the coming year, you will see one or two of those essays in print, and I hope to finish the book next year. It was contracted as a single-volume history of Pakistan but I had both political and philosophical problems with the very notion of "single-volume". I spent a solid few months trying to find which "single-volume" histories of United States I could adopt as a model for my own work. Of course, I was cognizant that the production of histories aimed at other geographies and ethonologies dovetailed with imperial and colonial projects. Of course, I was making a cheap point to myself.

What ended up happening, over the course of the last three years, is Walter Benjamin, Susan Buck-Morss, and Annemarie Schwarzenbach changed the way I was thinking about space, about landscape and about narrative. If you remember some of the small essays I wrote here, it was a bit of a struggle for me to think through the very form of writing and its intimate connection to the content of writing. Such modes of expression remain in tension with my graduate training, and the larger field of History - though I make no broad claims, nor do I claim any grievances. Related to the question of "form" was the question of history itself. Rather, the politics of how history and historiography play out in ontological or epistemological claims. In my dissertation, which was focused on 'political memory', I had a rather binary relationship between power and narrative - the power to narrate itself had political force, had violence, had truth-claims, and shaped knowledge. I had looked at Sindhi sub-nationalists as well as national textbooks and I had argued for a dialectical tension between community and state. Again, over the course of the last few years, largely through a deeper reading of Foucault and Reinhart Koselleck, I have come to amend my own understanding in crucial ways. I am much more conscious of the non-divide (along with the divide) between "state" and community. I am more aware of the everydayness of history-making - corporeally, materially and visually. The sights, smells and tactile aspects of historiography are venues that I have been collating and mulling over my last three trips to Pakistan.

In that vein, I wanted to share (in a few posts), some of what constitutes an archive. This poster was the beginning of one journey (subsequent posts will show other snaps). I had visited Jahangir's tomb with friends. The tomb lies at the outskirts of Lahore by the river Ravi. Rather, it used to. Lahore swallowed up Ravi. It swallowed up the tomb. Jahangir is now in Lahore's belly. 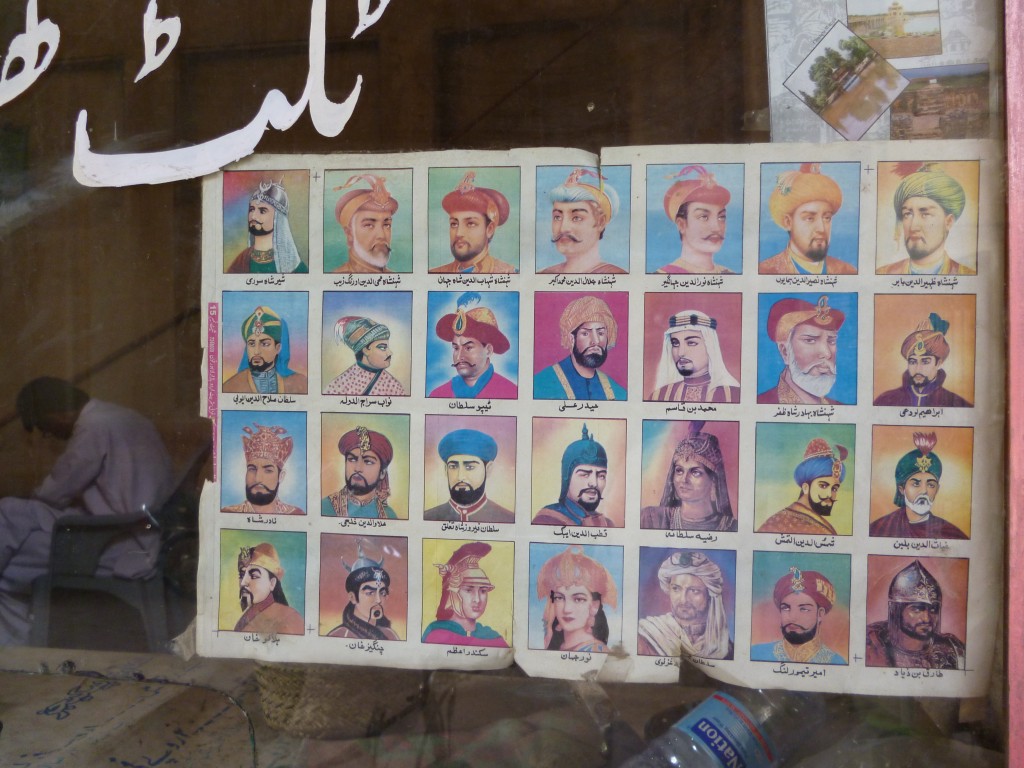 Heroes of Islam from Alexander the Great to Tipu Sultan.

At the ticket counter, affixed to the window was a poster of South Asian Islam's great heroes. Or that is what I thought, as I did not even look closely at first. As the discussion among my companions turned towards whatever correct change they needed from the Archeological Society, my eyes turned back to the poster. It was not what I had assumed. The Mughals were there. But so was Sher Shah Suri (who threw Humayun out of India). Chinghiz Khan, Hulagu Khan, Timur and Nadir Shah - destroyers of Iran, Iraq and Delhi - were also present. Salahuddin Ayubi and Tariq bin Zayad were there, but so was Alexander the Great. Razia Sultana and Noor Jahan. This was not heroes of "Islam". It was not "South Asia". What a weird poster.

Since March 2012, I have researched the canonization of Islam's heroes and the development of the theme of the popular historical fictions. Abdul Halim Sharar (1865-1926), JurjiÌ„ ZaydaÌ„n (1861-1914) and Shibli Naumani (1857-1914) are at one node of this tree while Ratan Nath Sarshar (1846-1902) and Nasim Hijazi (1914-1996) are another node. Pamphlets, posters, radio programs, tele-novellas are all modes of productions whereby these figures come to represent Pakistan's teleological certainties. The series (usually titled "Heroes of Islam") are present in almost every bazaar in every town or village. Their colors are vivid. The figures depicted almost always in bust- silhouetted- with thin delicate features and extravagant head-dresses.

What accounts for their near-ubiquity? What accounts for the diversity in their rankings? Who decided whom to include? How do we reconcile these textual productions with abysmal literacy rates and a near-dearth of a culture of book-acquisition? First, let me tell you a bit about the authors, and then let me suggest a way in which we can read this archive. The authors are rarely "academically trained" historians but each takes great pains to emphasize genuine historical inquiry and research into the sources by highlighting Orientalist historians and major works of Urdu or Arabic historiography. They are often retired military or civil-bureaucratic personnel who frankly stress one of these two, or both, goals in the writing of their histories: first “to acquaint boys and girls with the spiritual possessions of which they are to be guardians," and second, to battle "corruptions in history." There is no guild behind them, no formal organization. Hence, there is "Sindh jo Soomro" (Sindh's Heroes" or "Punjab di Shakseitan" (Punjab's Luminaries". The canon, by and large, remains within South Asia - though Alexander and Saladin are perennial favorites. Women are absent with the exception of Noor Jahan (Taj Mahal would be the deciding factor). There are spiritual analogues of these worldly conquerors and rulers. Visual representations and genealogical trees of Sufi silsila of char-yaars.

The poster, affixed to the wall, with very small print titles works associatively in public culture. The visual language of the depicted figure is almost always carried over to the cover of the pamphlet or the novel or the history. A curved sword, a green flag, a galloping horse, a sketched army, a woman in distress. Take a look at this depiction of Mahmud Ghaznavi on the poster for Luqman's 1960 historical movie Ayaz with the depictions of Ghaznavi and Iltutmish on the poster, and another novel from the 1980s:

Arrayed open-faced on bookstalls and pasted to walls and windows, these iconized faces reveal a visual history of Islam in the cultural imagination of Pakistan. The story may be urban-centric - though tier two and three towns have borne the brunt of rural migration in the past two decades and these visuals are just as prominent there. It is not so much about literacy rates, as it is about cultural literacy. Pakistan Television over the last four decades, and other cable and media operators have produced a tremendous archive of visualized and imagined heroes of Pakistan. More recently demagogues like Zaid Hamid have produced their own versions. The presence of these figures in the visual landscape is a link to congealed history of self-representation for a wide swath of Pakistanis. Every figure need not have a legible story and every story need not keep the central biography clear. Instead it is the connective tissue between a triumphal history and a triumphal nationalism that is most clear, most valuable. This is what is being read.

In subsequent posts, I will show you some pictures of bookstalls and bookstores. More places for an eye to rest, and a nation to form.

This is such a wonderful, evocative piece, particularly about the POSTERS. I would love to get a poster of heroes of Islam.. what is brilliant is that they seem like (from I can get from your piece) evocations of the popular imagination, even while some images may be circulating on media outlets... the poster above offers such a nuanced view of history including the women and conquerors who attacked each other.. lovely account..

Great post as usual, it looks like the poster itself is separate from the Hashia in your pic which states "Heros of Islam.....,Can you explain

and thank you to both!

Sorry by Hashia I meant the outer grey border of the first picture which has caption "Heroes of Islam from Alexander the great to Tipu Sultan" on left lower area. It seems the original poster and ticket window do not have any such caption, then their is second window through which this pic is being viewed(imagined) but I guess in paragraph immediately below the pic you discuss it.

It is a remarkable poster, might have ignored it, but since you provided the necessary commentary to grasp it, it has aroused my curiosity. The poster is remarkable in more ways than mere triumphalism, or mere Islamic heroes, or merely South Asia, or merely the manly side of power projection. There is something of an exception to every dominant projection of grandeur and power, to its negation. A Derrida in it. A self-shaking of the legible, the incapacity of the written, of visualized, of projected, to stand ground, indefinitely. It self negates on the margins. There is surely a place. Yes. Even, I can enter there. Ustad ji tayyari pharro!