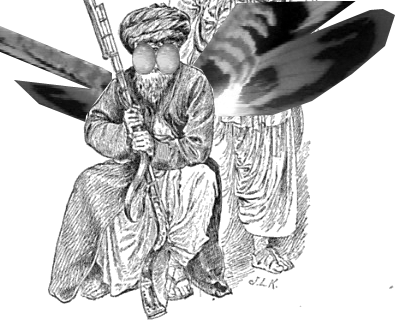 Talking briefly on twitter with Joshua Foust (whose book Afghanistan Journal you need to purchase RIGHT NOW) I commented how draining the Af-Pak-Af world is now. I do not feel like I can respond to any outrage, any calamity, and new development, any more drone strikes. It all seems so pointless. We have all said everything so many times, what is left to say? I assume that the CM readers have places to go get their visceral outrage on.

Yet, even in that haze of muted anger, today's DexterFilkinia shone through in a startling way:

KABUL, Afghanistan â€” For months, the secret talks unfolding between Taliban and Afghan leaders to end the war appeared to be showing promise, if only because of the appearance of a certain insurgent leader at one end of the table: Mullah Akhtar Muhammad Mansour, one of the most senior commanders in the Taliban movement.

But now, it turns out, Mr. Mansour was apparently not Mr. Mansour at all. In an episode that could have been lifted from a spy novel, United States and Afghan officials now say the Afghan man was an impostor, and high-level discussions conducted with the assistance of NATO appear to have achieved little.

Spy novel? No, this is not lifted from a spy novel, this is reality and we have been saying it is exactly this fucked up for a long, long time.

American officials pursuing lower-level Taliban defections have also struggled with identifying who they are dealing with. The senior NATO official said that about 40 percent of the time the men turning themselves over to the government may not be the Taliban fighters they claim to be, but rather are looking for money or protection or something else.

"It's hard to verify who they are," the official said.

Afghan officials said they did not have the name of the man purporting to be Mullah Mansour.

"One would suspect that in our multibillion-dollar intel community there would be the means to differentiate between an authentic Quetta Shura emissary and a shopkeeper," ssaid a U.S. official in Kabul who did not know about the particulars of the Mullah Mansour case. "On the other hand, it doesn't surprise me in the slightest. It may have been Mullah Omar posing as a shopkeeper; I'm sure that our intel whizzes wouldn't have known."

We kill with impunity. Just from yesterday's news:

A drone strike Sunday on a house in the village of Khaddi, also in North Waziristan, killed nine suspected militants including a local Taliban commander and two foreigners, the intelligence officials said.

The slain insurgent leader was identified only as Mustafa, and officials said he was linked to Sadiq Noor, a key Taliban figure in North Waziristan.

So, tell me, spy novel world, how is it that you cannot identify someone you give money to, someone you introduce to highest officials but you ask us to believe that you know without any doubt that someone you kill without any formal charge, any trial is the right target?

Sepoy, this is indeed hilarious (or terrible, depending on your level of friendship with NATO's people on the spot), but just mechanistically, I think your point about drones and this impostor is not correct. Before I go further, let me say that I am entirely with you in your quest for a borderless stateless world with one uniform rule of law, and would personally like to start with an end to this India-Pakistan bullshit, but that is a different matter. As you can see, I am trying to pre-empt criticism that I am not modern enough in my thinking here. I am saying I am all modern and liberal, more than most people I meet, so please bear with me; this is not an endorsement of drone attacks and warfare between states or between imperialists and barbarians, its just an observation, not an endorsement. So, after this lengthy digression, to the matter at hand: I submit that it is actually easy to see why the US can identify militants in Waziristan from the sky, but gets fooled by a pseudo-taliban negotiator. Here is why: The drone attacks are broadly in the same category as any other military operation against an insurgent force. The US is well aware that insurgents fighting in Afghanistan are supported by organized groups in Waziristan. They have been tracking those groups for years with various intelligence means. They also literally watch insurgent groups walk back across the border to waziristan and can see what places they go to. With a sufficiently well resourced surveillance effort from the sky, its not too hard to identify particular hideouts and then cross check them with human intelligence where available. I dont imagine the drone strikes are random or spur of the moment. Particular people can be tracked for hours, days, weeks or even months before they go ahead with a strike. In previous wars, the air attacks were targeting fixed places or large groups identified rather crudely. The new technology is an improvement over those efforts. There is absolutely no analogy with arrest and trial in a court of law. This is a war and a counter-insurgency campaign. Both can be regarded as immoral or evil and undesirable in the post-modern world, but that does not mean they dont have any way of identifying targets with some reliability. In the old days, reliability was much less, so civilian casualties in a modern air campaign were frequently horrendous (in many cases, civilians were the intended targets anyway). The current drone offensive is an improvement in that regard. The impostor case is very different. The people negotiating are mostly known only by reputation and I would submit that similar use of mid-level impostors would be possible in many insurgencies, but it is a joke of limited tactical or strategic value. It will add to the PR difficulties of the Americans, but will not play any substantive role in events...

[...] the bright side for NATO, while they can hand wring and ID the person they speak to next, they can keep going on killing people without much doubt: So, tell me, spy novel world, how is it that you cannot identify someone you give money to, [...]

I share your weariness. I can't even complain or debate or denounce anymore. All I can do is visit InformedComment and hope it's not as bleak as he says.

Julian Assange and the Computer Conspiracy; “To destroy this invisible government” « zunguzungu | November 29, 2010

[...] people genuinely drink the Kool-Aid, after all. Would our super-spies in Afghanistan ever have been so taken in by the imposter Taliban guy if they didn't, basically, believe their own line of propaganda, [...]

Well, as it has been shown in the wikileaks video where an AP reporter is killed by a manned aerial vehicle (apache) there isn't much cross-checking before shooting somebody on the ground.

Have you ever heard of the "unleashing of the dogs of war" ? The phrase is best understood by PBS interview with Robert. Macnamara gives keen insight into winners mentality. He knew back in WWII the moral implications of the fire bombing of Japanese cities. Infact he planned them and understood, that if the allies lost the war it was probable that the Japanese would consider him and his coplanners as the war criminals for killing literally hundreds of thousands of civilians. Truly innocents. My own father who flew bombing missions over Germany as a bombardier even understood what the firebombing of Dresden did to the civilians. Commoners like himself in many ways a citizen. After all my mothers father, was from Germany and he loved his father in law. War is hell on earth and prosecuting war is not for the squeamish. Either we r in it to win or don't be in at all. That being said I think that bombs and guns are so crude in the age of television, Internet, sex drugs and rock and roll. When there are so many other effective means to manipulate populations. Even stone age populations. Dick n Rummy used the wrong tools to create shock an awe. 27 million iPods, and satellite phones dropped in Iraq along with a half dozen awaqs providing bb service could have accomplished so much more manipulation of their culture and completely undermined Iraq leadership. Same in afgani and the tali along with very directed special forces. Obviously language enhanced iPods. Let's not get bogged down in the solvable and relatively inexpensive details.

Julian Assange and the computer conspiracy “to destroy this invisible government” « The Berkeley Blog | December 16, 2010

[...] people genuinely drink the Kool-Aid, after all. Would our super-spies in Afghanistan ever have been so taken in by the imposter Taliban guy if they didn't, basically, believe their own line of propaganda, [...]