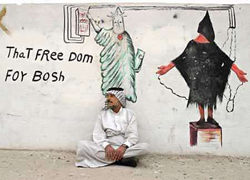 Empires aren't supposed to beat a hastily arranged retreat, Niall. What gives? Paul Bremer hands a blue folder to a confused older judge and a truly evil-looking Allawi and the Empire has left the building.

The Bush administration's gamble here is pretty obvious. Paul Bremer boards the plane. Shi'a, Sunni, Kurds explode onto each other with Israel, Iran and Turkey enabling participants. Who knows what it will look like when it all settles down but no one will be calling the White House for explanations. Karl Rove will have a mark on his checklist [Liberated Iraq] and we are on to the races. I am afraid it doesn't work like that. Or as Powell put it: You break it, you own it. The chaos in Iraq will remain front page news and the Bushies cannot dismiss it as an Iraqi problem. Iraqis are being granted the same freedom given to the Afghanis. A cobbled-up imported-elite rule, a country in chaos, and promises of freedom. And just like the Afghanis, they are not buying it just yet.

Should this be Freedom Day for Iraq? Well, if you would like to define freedom as Martial Law:

QUESTION: Mr. President, Iraq's new prime minister has talked in recent days about the possibility of imposing martial law there as a way of restoring security. Is that something that you think a new, emerging government should do, and particularly with the use of U.S. forces, who would have to be instrumental in doing it?

BUSH: You know, Prime Minister Allawi has, you know, fought tyranny. He's a guy that stood up to Saddam Hussein. He's a patriot. And every conversation I've had with him has been one that recognizes human liberty, human rights. He's a man who's willing to risk his life for a democratic future for Iraq.

Having said that, you know, he may take tough security measures to deal with Zarqawi. And he may have to. Zarqawi is a guy who beheads people on TV. He's a person that orders suiciders to kill women and children.

And so, Prime Minister Allawi, as the head of the sovereign government, may decide he's going to have to take some tough measures to deal with a brutal, cold-blooded killer. And our job is to help the Iraqis stand up forces that are able to deal with these thugs.

Right. Allawi's commitment to recognize human liberty must have been honed when his Iraqi National Accord was bombing women and children in Baghdad in the 90s. Do you really need Martial Law to deal with "one" killer. And while we wait to see if Martial Law becomes the rule, Bremer left behind 97 legal orders to keep things running smoothly [a traffic code that stipulates the use of a car horn in "emergency conditions only" and requires a driver to "hold the steering wheel with both hands." ].

It is a different F word that comes to my mind.