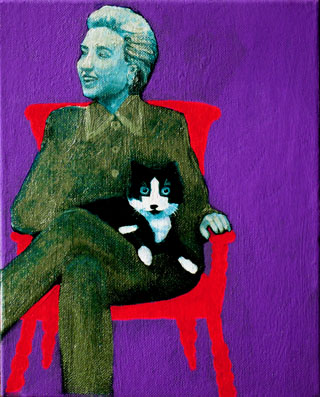 There's been a lot of buzz surrounding the upcoming release of former First Cat Socks Clinton's new memoir, First Cat: A White House Memoir. Chapati Mystery was fortunate enough to be granted an exclusive interview with Socks in which he discussed his book, life after the White House and his views on personal fitness and the upcoming presidential primaries. I met Socks at a cafe near his new home in Hollywood, MD. Socks was wearing a Native American designed collar ("From a retreat in Santa Fe," he explained) and drinking steamed milk with honey.

Chapati Mystery: I want to thank you for giving us the honor of this interview; we really enjoyed the excerpts from your book and have followed your career closely over the years.

Socks Clinton: The pleasure is all mine. I enjoy your website very much.

CM: To start out, could you tell us a little bit about your book?

SC: Yes, of course. People have been after me to do a book, some kind of memoir, ever since we left the White House. I realize that my perspective on those years is unique, but that was never enough to interest me in the project. There are a lot of bad memories too, and Betty [Currie] and I have been trying to move beyond those, so for a long time I really didn't want to dig things up. 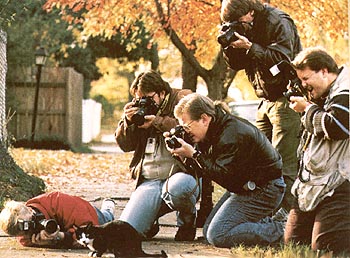 SC: Good question. I think what changed was my understanding of what the book would be about. I'm not your Joe Klein or David Gergen, I'm not about tell-all, all different members of the administration have gone over the same territory again and again...Whitewater, Monica, the healthcare issue, don't ask don't tell...I didn't want to go there. I wanted something deeper, more personal, more me.

CM: So what would you say the focus has become?

SC: I think the best way to put it is that the focus is on healing. It's on finding a new center and getting in touch with our own spirit within.

CM: That sounds more spiritual than a lot of the works out there, do you think people will react badly?

SC: You know what? Let them. There was a lot of toxicity in the Clinton White House and if some people are still interested in living in that space, they are welcome to it. Betty and I have been doing a lot of energy work and I think that has taught us both how to release the toxins we built up from that time and also how to transform and transcend negative energy when we encounter it.

CM: Can you tell us a little bit about how you came to live with Betty Currie, if that's not too painful? 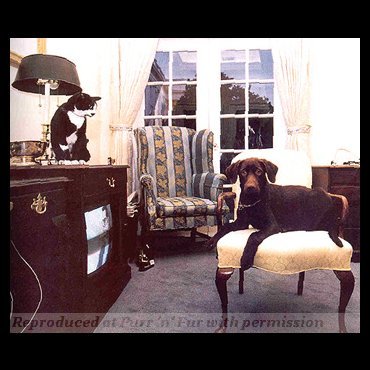 SC: I can talk about that now, and ultimately, I couldn't be happier with how everything worked out. But you know how it is when you're going through a painful ending; you just can't believe that in every ending exists a new beginning. The official story is well known, I believe. I 'hated' Buddy; needed to be kept separate; we were worse than Israel and Palestine, blah blah blah. The real story is very different.

CM: I noticed in your book that you see your 'expulsion' from the Clinton family as a narrative about pedigree and class in Washington. That was an interesting comparison, could you talk more about that?

SC: Yes-- I would say it's much bigger than Washington. What you have to understand is that we Clintons were ordinary folk. Chelsea found me in Little Rock. I'm not pure bred-- couldn't pretend to be if I tried-- but that was never a problem.

SC: Exactly, until D.C. When you become President, when you become first family, little by little you lose your ordinariness. You might not have the pedigree of a Bush or a Bouvier, but you become the beginning of a line. I do believe that there are aspects of the transformation you can resist. You don't have to have your clothing made by designers, you don't have to drive fancy cars or vacation in Gstaad, but little by little the transformation takes place, and frankly, I believe that the Clintons came to embrace it.

SC: Right, Buddy was a pure-bred. I think there was this sense that a First Pet has to be of an identifiable pedigree, not a 'tabby' or a 'mutt.' They looked around them and they saw the same thing everywhere they looked: all the pedigreed leaders had pedigreed pets. The Kennedys had a huge number of pets in the White House, all pedigreed. You have FDR and Fala, nowadays you have the Bushes and their scotties. The message is very clear. They were moving to Westchester, you don't take ordinary cats to Westchester. Of course, things didn't end well for Buddy and I'm sorry for that. I certainly don't hold his pedigree against him. We all choose the earthly vessels we inhabit for a reason and he has cast his off now. I look forward to re-encountering him in a future lifetime.

CM: It's clear from your book that you did a lot of research, can you talk about that experience?

SC: Don't get me started! Talk about toxic environments! 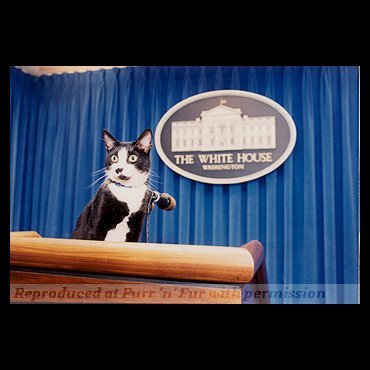 SC: Yes, and the presidential libraries. Everywhere I went. You would be surprised at how much prejudice I encountered. You'd think with a well known name like Clinton, I wouldn't have any trouble getting into the archive, but you'd be wrong. There's a tremendous amount of inter-species prejudice in our country that you just don't hear about. It's not considered important. But legislation such as the Freedom of Information Act does not cover cats or any other species besides humans, as I understand it. I think of myself as a patriot and a US citizen, but try telling that to the reference desk librarians at the Library of Congress. Dogs have loopholes for getting in, like they can get a physician to certify them as a seeing-eye dog, but we have no recourse to such permissions.

CM: So how did you get around that?

SC: Well, finally Betty got one of the Clintons' lawyers to allow me to enter any archive if she accompanied me.

CM: What was that supposed to accomplish? It must have been very boring for Betty.

SC: It was boring for her, but she ended up doing a fair amount of research of her own. You wouldn't believe the accusations they made: "Won't he rip up the books?" "Is he declawed?" "What if he vomits on the documents?" It was unbelievable, and very unprofessional. There was even one librarian who had the gall to try to kick us out because she was allergic to cats. I'm sorry, but is that my problem? Aren't there shots for that?

CM: Okay, so the question I'm sure you're getting asked a lot: If Hillary gets elected in '08, would you consider rejoining the administration if they asked?

SC: Well this brings us to part two of my discussion of pedigree in the book. What the Clintons didn't realize of course was that the regalization, if you will, that they experienced by being First Family was also experienced by me. Socks Clinton also became a pedigreed pet, of sorts, and over the years, I think they've realized their mistake. Recently the pressure to get my endorsement in time for the primaries has really heated up, but both Betty and I are reluctant to get involved.

CM: How have you been pressured?

SC: Well first it was a few phone calls, then a visit from Terry McAuliffe who brought us a gift basket, not really to my taste I'll admit-- a catnip mouse, some premium canned food, a plaid cushion for me to sleep on-- then recently Bill himself even came by and took us out for dinner and made a very convincing pitch (because he's Bill), but I am really very leery of getting involved.

CM: Can you elaborate?

SC: Well to start with, what kind of people are these? I mean, really? Who sends a family member off to live in the suburbs with the secretary (no offense to Betty, of course) because they think that individual does not serve their purposes any longer? And then, of course, Hillary hasn't been able to reassure me about issues that matter to me, such as species rights, licensing of alternative healers, etc. And you know, I'd want them to promise that Secret Service would stop humiliating me with leashes and so on. 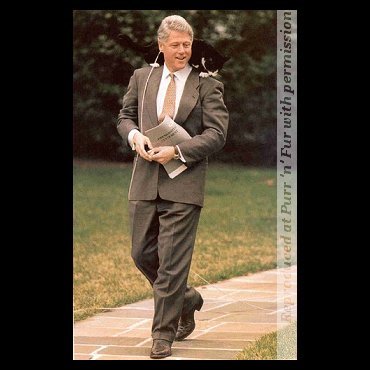 SC: Believe it or not, a cat on a leash. If you look at those photos of me and Bill on the White House lawn, you can see a white string hanging over his jacket. Secret Service insisted that I was a flight risk in open spaces. I protested, as did Bill, but you can't make those guys listen. They even clipped my toenails every time I went out in public with Bill, like I was going to assassinate him with my claws or something!

CM: We're running out of time, but I'd like you to talk a little bit about your personal life. I notice that you are looking very trim and fit, and I think our readers would be really interested in hearing about how you stay healthy.

SC: Well as I mentioned before, when we left the White House, Betty and I really had a lot of healing to do. It was a dark time, but little by little we found ways of 'feeding' ourselves spiritually and physically and I think we are both in a very good place right now. First of all, there's the energy work and meditation, then regular pilates, of course. We have been working on diet, and we tried to go veg for a while because Betty was reading Gandhi. 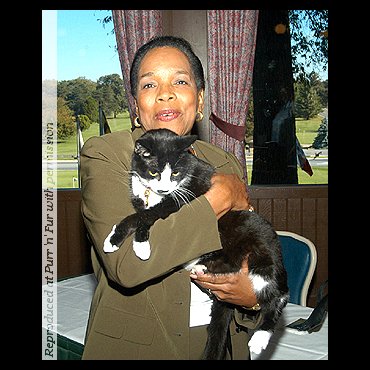 But I just couldn't handle that, frankly. My fur lost its luster and I felt listless. Finally I didn't even want to go to yoga class one day and Betty asked me what was wrong. I said, 'Betty, I really agree with the veg thing on principle, and I think it's beautiful what you've gotten out of it, but I'm a cat. I know my body, and I need animal proteins to survive.' She was disappointed but she understood. We compromised on fish and dairy for me. She's still striving to be a total vegan, but her husband isn't really on board with that. After that experience, my trainer wanted me to get back in touch with my feline self, so we've started to work in some yarn play and simulated mousing on alternate days with the pilates.

Dear Socks, who are you picking in the Iowa Caucus? Are you still mad at Hillary? And how do you feel about Barack Obama's history of pet crocodiles and turtles?

Dear Socks, I really admire your spiritual nature. I meditate every day myself, but it's hard around here because there are these dogs. But I do try to concentrate on higher things for at least several hours each day. Sincerely, your friend, Alice.

Socks, could you speak to the rumors that you shot Vince Foster?