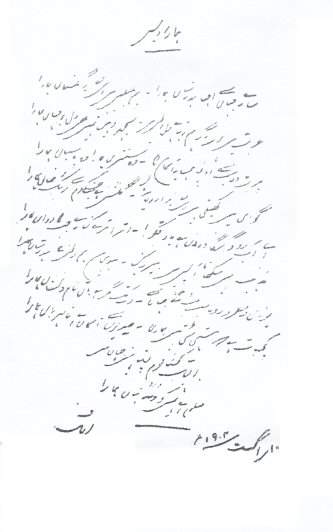 Naim Sahib forwarded a correspondence in which he answers a question about the Urdu poet and intellectual Iqbal (1877-1938). I reproduce it below without his consent. He can yell at me later:

Q: I have a question for you. Attached is (supposedly) Iqbal's Tarana-e-Hindi (The Song of India) written out in his own hand. What does it say in its last line (i.e. after the "maaloom kya kisee ko darde-nihan hamaara")? Does it have a date? And what is the title? Does it seem authentic to you?

Naim wrote:
The poem is titled 'hamaaraa des'*, the original title that Iqbal chose. Yes, it is in Iqbal's hand. It is the authentic original text, though no one knows (in the book I refer below) where it comes from. It appeared in Ajkal (Delhi) in 1977. You may think it would be easy for someone to go and pester the editors and find out their source. But no one has done it. But the writing is exactly Iqbal's. The date is 10 August 1904.

According to the late Dr. Gyan Chand (in his invaluable, Ibtida'i Kalam-i-Iqbal), Lala Hardayal, the founder of the Ghadar Party, was a student at Govt. college, Lahore, where Iqbal taught philosophy. Hardayal founded something called Young Men Indian Association and invited Iqbal to preside over the founding meeting*. Iqbal came and read the poem instead of a formal address. It became an instant hit. (Iqbal used to recite his poems very well.)

There is some controversy. Did he write the poem that day, or had he already written the poem and sent it for publication to Zamana (Kanpur), edited by Daya Narain Nigam, where it appeared in the Sept. issue. The text he recited was copied and sent (without Iqbal's knowledge) for publication to a Lucknow magazine, Ittehad, where it appeared in August. And brought him some criticism for bad grammar. (We urduwalas are unforgiving people.) The poor man had to make some changes, and then publish it in Makhzan (Lahore), in its October issue, edited by his close friend Shaikh Abdul Qadir.

A minor error, that a Punjabi critic also pointed out was that he used 'nadiyaaN' instead of 'naddiyaaN', but he didn't accept that criticism. The big ones were in the last two verses. In the second lines, and caused by his obligation to use the word 'hamaaraa' as the 'radiif'. He had to make changes. The original second line of the penultimate has: sadiyoN se aasmaaN hai naa-mehrbaaN hamaaraa. The objection: grammar requires that you should say 'aasmaaN ham par naa-mehrbaaN hai' -- you can't drop the postposition. So Iqbal changed it to: sadiyoN rahaa hai dushman daur-i-zamaaN hamaaraa. Then in the final verse, the second line was: maaluum hai hamiiN ko dard-i-nihaaN hamaaraa. Objection: it should 'apnaa dard' and not 'hamaaraa dard' when you have 'ham' as the subject. Again Iqbal gave in: maaluum kyaa kisii ko dard-i-nihaaN hamaaraa. The Urdu heavy-weight is said to have been no other than Hasrat Mohani.

PS. Note how good the postal service was in those days.