[Editor's note: This is the first part of M. Neelika Jayawardane's two-part essay on South African Desis. A longer version of this essay appeared in Transition 107]

In my return to Southern Africa as an adult, I was delighted to find a space in which “Indianness” was engaged in a different conversation. It was only then, almost twenty years after I first left, that I realised that it is possible to renegotiate a relationship with a place that had little patience for the nuances of difference. But that intersticeâ€”where confluences between seemingly vastly different bodies could take placeâ€”wasn't found on the front pages and the blaring headlines. Just by the pervasiveness of samosas along the eateries of Cape Town and the interior of the Western Cape, for instance, one knows that there had to have been Indians in these quarters for much longer than the nouveau-riches that make the front page. We don't know exactly how the famous fried savory pastry got to Cape Town, but it's firmly ensconced there.

But one does not have to rely on taste alone to see the hallmarks of India all over the Cape. The cobblestoned streets that line the hill of the Bo-Kaap, a historical neighbourhood built by those transported forcibly from Indonesia, Malaysia, Sri Lanka, and parts of India — the locations in which the Vereenigde Oost-Indische Compagnie (the Dutch East India Company) carried out “colonial activities,” empowered by the 21-year monopoly granted by the States-General of the Netherlands in 1602 —are swirling with signs of the Indian Ocean. I recognise one person's sidelong shy smile, the hairline on another, and the disgusted curl on the lips of a street-hawker, spitting unhappily as a deal goes awry. These embodied connections, as old as the slave ships that brought people from that region, reach back to 1654.

By the 2000s, scholars and amateur historians alike were already digging up the clues to South Africa's long tradition of entanglements, rather than its separations. That image of the “rich Indian,” of which Riason Naidoo spoke, comes from connecting South African Indians with mercantile networks across the Indian Ocean, allowing them access to “deals” unavailable to others. Uma Duphelia Mesthrie, in “The Passenger Indian as Worker: Indian Immigrants in Cape Town in the early Twentieth Century,” notes that these misunderstandings come from conflating two sets of migrants: one indentured, and the other, more free. First came thousands of Indians, mostly from Tamil and Telegu-speaking areas of India, brought to South Africa from 1860 onwards as indentured labourers, under contracts to work in the British Colony of Natal. Arriving later, from the 1870s and the 1880s, were those who came to be known as “passenger Indians”: migrants who paid the ship's passage to the colonies, coming to trade or serve in commerce-related activities. Perhaps simply because the wealthier Indian merchants, by the very fact of their rarity, were visible in a country where wealth was mostly only possible if one were “white.” However, the majority of these latter passengers, according to Mesthrie, were small-time traders or hawkers, assistants or servants to wealthier merchants.

Outside the academy, the more subtle conversations about what it meant to be simultaneously African and Indian were already taking place along the railroads, cane fields, mineshafts, and the backrooms of shops during the early part of the twentieth century. Those early conversations led to political convergences. In 1913, for instance, under Gandhi's guidance, indentured labourers rebelled against a new tax on their persons. Later Indian involvement in the anti-apartheid movement was not restricted to the “greats;” ordinary middle-class Indians joined with ANC efforts, facing detention under the State of Emergency, house arrest, and “banning,” which effectively removed them from the public sphere. Amina Cachalia, co-founded The Federation of South African Women (FEDSAW or FSAW), which was launched on April 17, 1954 in Johannesburg and was the first attempt to establish a broad-based women's organization. As leaders in the Defiance Campaign, Yusuf Dadoo, Ahmed Kathrada, and Billy Nair were three of the defendants at the Treason Trials of 1956, along with Nelson Mandela, Walter Sisulu, and Govan Mbeki (father of president Thabo Mbeki).

On my return to Southern Africa, I had this list of historical figures, names and noble deeds memorised like a litany of self-protection. But I found that I didn't have to carry such amulets. Within a short time, I found that the political, aesthetic, and intellectual leanings that led to convergences between “Africans” and “Indians” were still alive, as is evident in The Indian in Drum Magazine in the 1950s (2009), edited by Riason Naidoo, containing essays accompanied by a lavish collection of photographs curated from the pages of Drum Magazine. 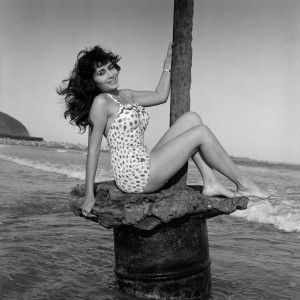 Drum has a significant place in the South African political, social, and aesthetic imaginary: in the 1950s, the establishment of Drum Magazine, with its racy sets of photographs and articles, reflected the dynamic changes that were taking place among the new urban Black South Africans, be they African, Indian or Coloured. The images therein contrasted with the vision promoted by the freshly elected Nationalist Party's policy of Apartheid: a docile, rural lot, ready for servitude. The images splashed across the pages of Drum were the location in which the liveliness, intellectual ingenuity, and style of the disobedient apartheid-era subject was captured. Consider Ranjith Kally's photograph of Rita Lazarus, Miss Durban 1960: there she is in curvy deliciousness, wrapped around a breaker at high tide, the Indian Ocean swirling around her. It wasn't the official South African vision of the Indian woman: bejewelled and covered, eyes downcast in submission to lord and authority. 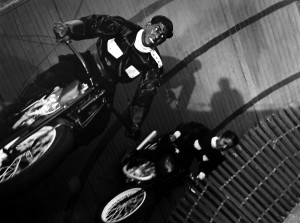 The photographs Naidoo chose for The Indian in Drum are deliberately intended to challenge conventional and “official” portrayals of the South African Indian community, and illustrate the role of ordinary Indians in challenging those conventions. Here, we are treated to a series documenting the feud between the “Salots” and the “Crimson League” gangs, and the swagger of Sheriff Khan (known as “South Africa's Al Capone”), the king of the South African underworld. Khan aggregated power by collaborating with apartheid law enforcement officials and combining various gangs in Johannesburg and Durban to become the mastermind behind illegal gambling establishments.

Other images are of activists Yusuf Dadoo and Monty Naicker, Indian footballers, 'Jazz King' Pumpy Naidoo, daredevil motorcycle riders, ballroom dance champions. There is one especially priceless photograph of Sonny Pillay, the dashing Durban Indian ballad singer, who was dating Miriam Makeba at the time: he is surrounded by adoring family members, they crowd around a sofa, looking through a magazine, while Miriam balances a cup of tea in her hand. Others are less glamorous: images of child labour on the sugar farms in Natal, and dire depictions of the living conditions in the ghettoes in Cato Manor illustrate the reality lived by most Indians of Natal. 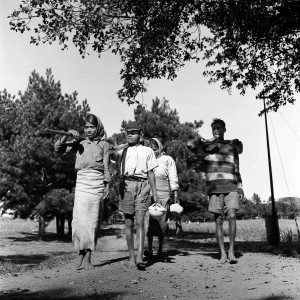 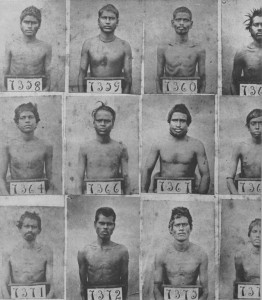 In Naidoo's office hangs a painting that has always captured my attention: it depicts, in Warholian colours and shadows, the faces of indentured labourers, whose photographs were taken upon their arrival in Port Natal in the nineteenth century, much like prisoners' mug shots. The labourers hold little placards with numbers on them: that number, not their name, is their identity. Their displacement, and the shock of arrival, is captured in their haggard, wild features. Images such as these got Naidoo interested in early photography of colonial subjects: “in the nineteenth century, photography was used to document the colonial peopleâ€¦in a very ethnographic fashion, as the sick, as prisoners, or as the poor.” When he began his career in art, he wanted the people in the communities from which he cameâ€”people who had no access to conceptual and abstract Western artâ€”to be able to see themselves in the work he produced, rather than in mug shots taken to document their labouring bodies for empire. “I wanted to speak to our real history. My father and brothers were tough guys, quite serious fighters who could take care of themselves. They could carry big sacks of rice and beans, drums of oil. I was looking for photographs to tell these stories and I couldn't find them. I just found bits and pieces.” Then one day, as he was looking through a 1950s copy of Drum magazine, he found that “about half of it was about Indian gangsters, Indian footballers, Sonny Pillay, and Indian photographers and writers. These were the stories that my parents spoke about.” While scholars had pored over Drum to document its place in the struggle against apartheid, and to signify its importance to black culture, “nobody had yet mentioned [the Indian photographers or the Indian subjects] in all the studies done about the contributions of Drum. It was completely overlooked. And that's when [my] project started.”

When I looked at the neat rows of small images from the entrance of the National Gallery, they didn't look imposing, or world-changing from a distance. The photographs were deliberately smallâ€”so the viewer was compelled to walk towards them: they invited intimacy; they requested a conversation beyond a passing perusal. They showed me that it is possible to begin a conversation with one's history, as impossible and displacing as it will be, undoubtedly, at times.

In my youth, I'd wanted nothing but leavingâ€”the voluminous otherness that was America was such high pleasure that I forgot to return home for nearly two decades. When I left my rural backwater mining town in Zambia for an equally backwater college town in the U.S., I wanted nothing but to run away from the narrative of expatriate-Asian unbelonging in Africa. I thought I'd never return: it was neither a negotiation that I imagined wanting to encounter, nor was prepared in any way to face.

As I walked through the gallery on a quiet weekday, overhearing the conversations of other visitors, I realised that even in 2011, South Africans were still engaged in the daily labour of encountering difference, and re-inscribing closed patterns of thinking that fit each of them into too-tight moulds. Here, in these images, I saw that people had already engaged in the difficult conversations that I had once found too debilitating to face: they had had no place to run away to. They had opened up a space for dialogue during a time and in a place where there was only room for a one-way ethnographic description. I wasn't facing this work alone.

You have your wires crossed. Sheriff Khan was in Johannesburg and the Salots were in Durban. They were even stronger than the Crimson league and consisted of 5 Brothers and each of the Brothers had their own "Soldiers", people used to pay them protection money, etc. Dee Salot was Second in Command after Gloves.

TO SET THE RECORD STRAIGHT...SHERIFF KHAN DID NOT BELONG TO OR ASSOCIATE WITH THE "SALOT" OR "CRIMSON LEAGUE" GANGS. SHERIFF WAS INDEPENDENT AND HAD HIS OWN GANG BASED IN JOHANNESBURG. SHERIFF HAD ONLY ONE BROTHER, SULEMAN "SOLLY" KHAN.