[editor's note: This is the first part of M. Neelika Jayawardane's two-part essay on South African Desis. A longer version of this essay appeared in Transition 107. Our sincere thanks to her for allowing CM to host it.]

As a child growing up within Southern Africa's socio-political landscape, I found no easy, seamless fitting in. South Asians were always Indians in Africa, and Africa's encounter with Indians didn't teach them about the beauties and wonders my own father had encountered there: his stories about his student days in India were littered with nostalgia for the seven temples of Mahabalipuram crumbling into the Indian Ocean, and the fineness of silk saris that could be threaded through the eye of a needle; he conjured up Calcutta as the beloved seat of Indian literary knowledge and classical music, and the states of Kerala and Tamil Nadu as Sri Lanka's once-conjoined siblings, separated by the imprecise surgery of oceanic waters.

I remember that our small Sri Lankan community in Zambia did everything they could to differentiate themselves from Indians in Africa. But for all practical purposes, no one on the continent (or anywhere else, for that matter) could see any difference. We corrected those who mistakenly misidentified us. We listed and elaborated upon our differences from Indians. But our attempts to separate ourselves from Indian barbarity were to no avail: for Africans, India remained a broken nation. And Indians in Africa were the shop-keeping, corner-crisps-shop-running, trader-cum-smuggler-cum-briber, arse-kissing, yes-no-head-lolling-and-“r”-rolling, expel-from-your-African-nation-Asians. Africans thought of Indians in much the same way as much of the world thought of India and Indians back then: dusty, diseased, starved, overpopulated. 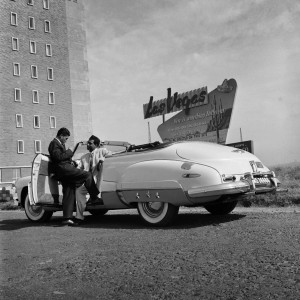 During my visit to South Africa in 2011, the National Gallery in Cape Town was exhibiting a selection of photographs of Indians in South Africa circa the 1950s, together with a concurrent exhibit profiling the work of photographer Ranjith Kally (b. 1925, Isipingo). When I spoke to Riason Naidoo, the Director of the National Gallery in Cape Town and the curator of this exhibit, he had a lot to say about constantly battling that image of “Everyone's Indian”. “Everyone's got their Indian” — a phrase that embraces an old racist trope in South Africaâ€” expresses fear and need, but it ultimately emphasises the disposability or interchangeability of the Indian. It says that hustlers big and smallâ€”from the illegal shabeen and spaza owner to those who have set up shop in the headiest locations of power in South Africaâ€”all had their set-up man, their palm-greaser, their apologist, their go-between. But that ugly phrase also conveys something more: that the man to whom one swore brotherhood in the thick of plot and hangover would inevitably be disowned and discarded when the time came to rule.

When he first went to university in the mid 1980s, Naidoo, a Durban-born “Indian” in Cape Town, realised that apartheid made people lazy: they simply bought the stereotypes of the four “racial categories” (White, Black, Coloured, and Indian) wholesale, along with the images that accompanied the categories. As an Indian, he was expected to be the result of an arranged marriage. But Naidoo's real experiences were a collage of less conventional portraits: he grew up in Chatsworth, an area delegated for those classified as “Indian” under the auspices of the 1950 Group Areas Act, which mandated that desirable areas of urban spaces be designated for “Whites,” while all “Others,” including those registered by the census bureau as Black, Coloured (people of mixed racial descent), or Indian had to move to far more desolate areas, giving up their homes in the city. The Group Areas Act only amalgamated the aims of several previous laws, passed as a result of European agitation against Indian “penetration.” In Durban, the Act had the effect of forcibly removing tens of thousands of Indians from around the city to Chatsworth, fifteen miles away from the city, only to be packed into semi-detached housing.

Chatsworth, existing on the outer margins of Durban, today contains the largest concentration of Indians in South Africa. It is not the location of the picturesque poor. Scholar and activist Ashwin Desai substantiates Riason Naidoo's experiences: here, the poorest residents continue to be routinely evicted because they are unemployed and unable to keep up with rent and utility payments. Those who are employed spend ten to eleven hours away from home, because they have to take the long bus ride into Durban, leaving children without supervision. Desai's The Poors of Chatsworth: Race, Class and Social Movements in Post-Apartheid South Africa (2000), points out that among the deeply impoverished, the “Indianness” of Indians hardly matters, especially not in “post-apartheid” South Africa, where economic conditions maintain racial separations as tightly as did the legal definitions. The title of his book comes from the quip made by a Chatsworth resident bearing the disarming name Girlie Amod: during a standoff between Chatsworth residents and local ANC politicians, the residentsâ€”who were about to be evictedâ€”were accused of asking for special treatment because they were Indians. Amod's famous reply was: “We are not Indians. We are the poors,” thusly connecting herself and her community's plight with that of the global favela-resident, be they black or Indian, from Durban or Johannesburg, Rio or Bombay.

It was these “poors” among whom Riason Naidoo grew up. As a youngster, Naidoo spent hours in the market on Victoria Street after school, mingling with street fighters and the gangsters; it was here, among the hundreds of stalls set up by Indian and African merchants in a huge building on the corner of Queen and Victoria streets, that his grandfather had a stall beginning in the late 1920s. When he was accepted into university, where he studied fine art, it was the first time he left the cocoon of all-Indian society, segregated as it was during apartheid; there, he was confronted by white students' stereotypes of what being “Indian” represented. Naidoo recalls, “And this was completely surprising for me, because it wasn't my experience. My parents weren't arranged in marriage. They went out to ballroom dance. We weren't rich.” Naidoo confirms that in his understanding and experience, Indians in South Africa were already a “Creole culture,” although “people from the other racial groups didn't understand that. So I was looking to tell that story. It began with my own paintings, about articulating what life was like in Chatsworth.”

When he arrived in the Cape, as Director of the National Gallery in 2009, there was more than a gentle resistance to his ideas of representation. In the gallery's 139-year history, it had never before had a “non-white” director. When Naidoo decided to remove paintings by Thomas Gainsborough and Joshua Reynolds, which had hung on those walls for sixty-three years, Art Times, an influential South African journal of art, decried that the venerable institution had been “trashed” and called Naidoo's ambitious collection chronicling South African art from 1910-2010 an example of “the Wal-Marting” of South African art.

Naidoo faces an uphill battle in his attempt to remove the “eliteness” (read: “whiteness”) associated with aesthetics in South Africa, and not just from the sniffly reaches of the art world. Besides that fight, his actions, whether supportive of artists of all the late-great racial groups' work, is continually read for signs of what people believe might be motivated by his “Indianness.” 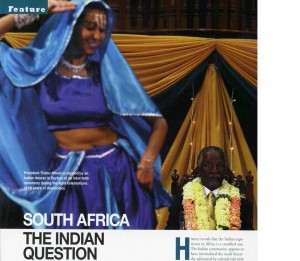 As late as 2004, Nhlanhla Hlongwane disparaged what was seen as the “separatist” attitude of Indians in a report published in the New African: while the Indians in England, “be they Hindu, Muslim, Buddhist, Hare Krishna or Christianâ€¦[are] very British,” just as “the Indian on the Caribbean Islands is very Caribbean,” the writer found that the “Indian in South Africa” had not “found an affinity and solidarity with both country and continent.” Hlongwane's piece is fronted by a delightfully troubling image: a bejewelled, turquoise-satin clad dancer, midriff bared, regales a very glum looking president Thabo Mbeki; he eyes her from his seat on an ornately carved wooden chair, stifled by two gigantic garlands of flowers. The image, and Hlongwane's writing, capture the uneasiness historically associated with the Indian in South Africa. Having “internalised the racial hierarchy advocated by colonial rule with white people at the top and black people at the bottom of the strata,” as Hlongwane wrote, “Indians,” who were situated somewhere in the middle, are forever imagined to be stuck on replay: playing “white” and playing up to the “whites” in order to be recognised as better than barbaric.

[...] “Everyone's Got Their Indian” — I: Separationsâ€””I remember that our small Sri Lankan community in Zambia did everything they could to differentiate themselves from Indians in Africa. But for all practical purposes, no one on the continent (or anywhere else, for that matter) could see any difference. We corrected those who mistakenly misidentified us. We listed and elaborated upon our differences from Indians. But our attempts to separate ourselves from Indian barbarity were to no avail: for Africans, India remained a broken nation. And Indians in Africa were the shop-keeping, corner-crisps-shop-running, trader-cum-smuggler-cum-briber, arse-kissing, yes-no-head-lolling-and-“r”-rolling, expel-from-your-African-nation-Asians. Africans thought of Indians in much the same way as much of the world thought of India and Indians back then: dusty, diseased, starved, overpopulated.” [...]