[What precisely is a response to the drones? Recently Teju Cole introduced drones in first lines of well-known fiction works and got more tweets than any of the current drone strikes. Almost simultaneously, Himanshu Suri (aka HEEMS) released the video of his "Soup Boys" single which feature drones. Let us just say that while Pitchfork.tv is not necessarily concerned with Yemen or Pakistan or Mali and drones, they gushed about Soup Boys and its politics. There is both creativity and critique at the heart of these efforts - and where legally or morally we seem to be getting no where, perhaps creativity is the only ethical space left to marshall a defense. In that vein, I am very pleased to feature a guest post by AJK with another creative comment. Enjoy. - sepoy]

An Architectural Defense From Drones 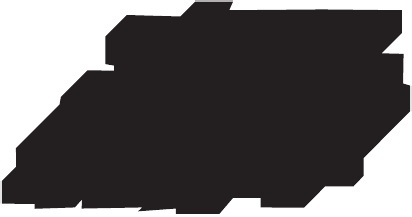 My primary defense mechanism in law school was to get interested in non-law things. Lurking at the school of Jewish, Islamic, and Near Eastern Languages and Cultures, reading Wael Hallaq and James C. Scott, and most fortunately, auditing a course at the wonderful Sam Fox School of Design & Visual Arts. Iain Fraser's "Extreme Architecture" taught a wholly different type of problem-solving than dry & detached legal reasoning. We took weeks learning about different types of tents, then went on to outer space, military bases, and St. Louis. All the while, the point was to be empathetic to individuals and find livable solutions for them. Empathy was a very alien concept to embrace coming from law, however. 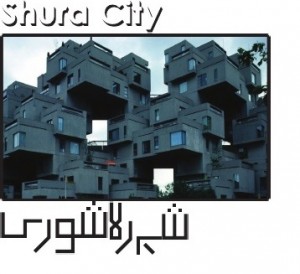 The idea for my final project, an architectural defense against drone warfare, came from the realization that law had no response to drone warfare. My own understanding of the ongoing [War on Terror pseudonym] as a civil rights issue is irrelevant, we only learn civil rights as a historical happening, not a current struggle. But architecture has a proud anti-legal tradition. Architecture is a way to protect people when law chooses not to.

Drones work by detecting patterns, identifying individuals, and extracting data. I dreamed up Shura City (named in honor of Farah Jan's photoessay on Quetta) to fight against drones with humanity and community. The city is a "black box" impenetrable to data miners and military-trained individuals but it is not a prison. It is instead a gated community, providing its society with sunshine and safety from the scary world outside.

It is at best expensive and at worst impossible to build armor that can deflect any American bomb. Shura City instead uses inscrutability as its armor, finding more solace in Said than in Vauban. Though its outer shell is fixed, Shura City's inner walls can be moved to provide for growing families, heated feuds, or just for the change of it when Farah Abla decides she wants to be an interior designer. Its windows are protected by computerized mashrabiyas that blink and recombine into various QR codes to jam leering cameras. Its expansive courtyard is protected by latticework with backlit (by color-changing LED) windows that allow for sunshine for children and stars for young lovers, but also make face detection tricky with color blocks and changing shadows. The zebras know each others' names, but the lion only sees stripes. 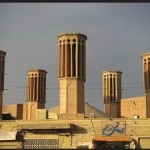 Badgirs and minarets do their part to provide wild fluctuations of temperature (so that individual bodies are difficult to identify with infrared) and to provide high-wattage radio towers to interfere with wireless communication. The latter of which was inspired by my father's story of growing up near a radio tower and listening to the Cincinnati Reds by plugging pilfered speakers into a chainlink fence. True, inhabitants of Shura City will have to turn in their Macbooks and tablets for ethernet connections, but this is a small price to pay. 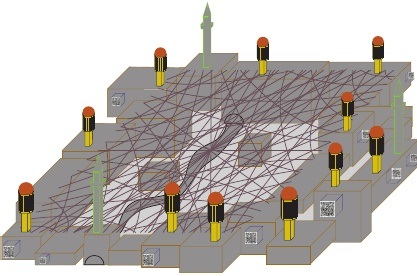 The goal of Shura City was to celebrate humanity in the face of the mechanization of war and the mechanization of killing. I wanted to create a vibrant, colorful, fun, and peaceful place for the populations victimized by drone warfare. I wanted to give them the opportunity to create their own community far from the invasive eyes, nose, and tongue of otherwise-faceless robots. I wanted to create the same gated community I was fortunate enough to grow up in and export it to people facing far worse fears than small drugs and sleazy parties.

Ever since Napoleon entered Egypt, "Westerners" have found the "Eastern" city impenetrable. My goal was to armor Shura city in Orientalism and to turn the empire's strongest weapons: technology, reorder, and arrogance, against themselves. It is time for the Bantustans to protect themselves against outside interference, to say "don't call us, we'll call you." Shura City is not a finished product (as if the sketches fooled you) but an idea, celebrating collective effort, organic change, and insider humor - in other words, society - in the face of a binary code that only sees us in binaries. Shura City is a hope. I hope it will work.

An Architectural Defense From Drones by AJKohn

It's a nice idea, but it's still centralized. Anything centralized eventually becomes the same as what it was supposed to defend against. Remember the US Constitution? "To secure the blessing of liberty to ourselves and our posterity." Well, we are the posterity and we are beginning to notice that the government considers us to be its enemies.

[...] So this is my fear: We won't be able to prevent droÂ­nes to exist. These droÂ­nes will potenÂ­tiÂ­ally be in the hands of all those people we'd rather not have to have droÂ­nes. Maybe we should arm ourÂ­selÂ­ves too? Or build drone-resistant communities? [...]

@Jewel Vern What you're saying sounds a lot like treason. This American doesn't think his government see's people as enemies. This American thinks a lot of treasonous Americans see their government as an enemy. This is a big difference. If conservative want to commit treason and secede again, go ahead, but don't pretend like it's anything more than shredding the constitution, turning your back on your American heritage and committing treason...

@Chris There is nothing in the Constitution that says succession is illegal in the first place. This country was born out of succession. He may sound treasonous, but you sound like tyrannical Brit from the 1770's.

@ Chris Jewel Vern is just an American concerned about the fact that his government is dropping bombs from drones on countries we're not even at war with (Yemen, Pakistan, etc.) It is not treasonous to express disdain with the practices of the federal government. Treason as defined by the constitution: Treason against the United States, shall consist only in levying War against them, or in adhering to their Enemies, giving them Aid and Comfort. No Person shall be convicted of Treason unless on the Testimony of two Witnesses to the same overt Act, or on Confession in open Court. He's not waging war or aiding an enemy. He's alluding to the fact that our current president has authorized the use of drones on American soil and thus making us, the citizens, the enemy of the state.

it's "secession" not "succession". that aside, American presidents, congresses, courts (texas v white), and historical precedent (civil war) are extremely clear: secession will never be allowed. lest you harbor plans of 'violent' secession, remember the french (recognition, loans, troops, weapons, navy, international interdiction) had an awful lot to do with american independence. it most definitely was not a handful of colonial farmers who fought off the throne. but if you truly need to be free of America--emigrate!

to the topic at hand, however, intriguing and ingenious ideas for drone-proofing a community. seems a worthy idea to me, well done.

[...] architecture. Kohn recently blogged about the project, an anti-drone place called Shura City, at Chapati Mystery, where he wrote about the failure of the law in the face of [...]

Anti-drone technology would have to be deployed on a widespread basis to be effective. Otherwise, a drone will detect that there are a few areas where its data mining is being blocked and the assumption will be that only bad guys with something to hide would go to such lengths. Anti-drone technology deployed sporadically would only invite a ramped-up attempt to discover what is being hidden, or -- at worse -- a visit from a SEAL team.

[...] Drone City | Chapati Mystery Ever since Napoleon entered Egypt, “Westerners” have found the “Eastern” city impenetrable. My goal was to armor Shura city in Orientalism and to turn the empire's strongest weapons: technology, reorder, and arrogance, against themselves. [...]

[...] the work of Asher J. Kohn is worth mentioning. He drafted an architectural concept for an “anti-drone city“, which uses several technological tricks to defend against detection from drones. Towers, [...]

Hello Chapati Mystery, Can I get AKJohn's email? I would like make a mock up model of his city in 3d. Thanks for the article.

[…] Some of these examples are all too often just seen as controversial artwork. As numerous recent examples show, it can be helpful in countering the enforced one-dimensional framing of faraway areas. Even […]