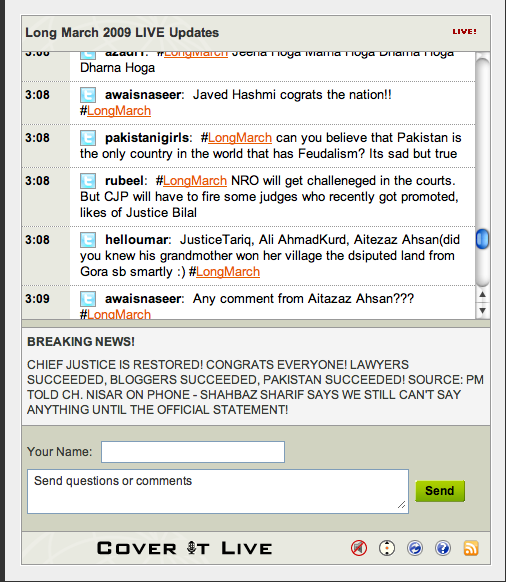 I don't know if this is true but what a glorious moment even a possibility of this represents for the people of Pakistan.

It is a long journey, with many more miles to go before you can sleep. But it is nevertheless a pleasing result.

Congratulations to everyone who supported this great movement. I hope the deal sticks. Many many many problems remain, but what a great day for Pakistan and Pakistanis. Meanwhile, here is a letter i got from a friend who works in the foreign service of Pakistan: The Army, the Presidency, the Americans and the Prime Minister, were all ready to throw peanuts at Nawaz Sharif. The assessment was that 500 will reach constitution avenue. ( read Salman Taseer) In Pindi, we had halwa puri at a friends house today. a ppp friend who knew my passion for the cj, at 11-00 am said, looking at me, "Yar Imran, there is a bigger long march in my house than in Lahore." A PML N friend told me from Lahore, "Punjabis dont get out in the face of danda. The long march will fail" The starting point of the Long March from Lahore was the GPO chowk. Nawaz had to join it from model town. Nawazs house had 40 PML N workers chanting tired slogans at 10-30. Mall in front of GPO had a vacant look at 10-55. Police and the empty road. A sole lawyer reached GPO chowk at 11-00 am and said to Express TV, " I made it, others can come too." By 12 around 50 civil society activists and lawyers reached the place. Then, God smiled. Police starting using the third degree. Surprisingly, fool hardily, the 50 surivived the first 15 minutes, and fought back. By another 15 minutes, they became 150 and started throwing stones at the police. Justice Shahid Siddiqui got a shell and was injured. For three hours they kept fighting, girls, women, lawyers, including Asma Jilani. Express had a crane camera and three great reporters. Lahore saw police beating girls and activists. Mian sb was reluctant to come out. He did not have numbers with him. There was no organisation. Lahore was locked, and some rich kids were preparing for Basant. I think the GPO beatings shook him. Hamza Shahbaz stealthily broke free in an SUV , with ten people. Express broke the news. Suddenly Lahore woke up. " Nawaz is out, on his own?" In two hours, the 10 became 20,000. In the meanwhile, the 150 at GPO chowk fought, some fainted but did not leave despite Salman Taseer's goons. In these three hours from 11-00 am to 2-00 pm, Pakistan's destiny changed. Lahoris woke up, and joined their son. In another three hours, they knew that lacs would reach islamabad. No police, no army could stop the procession. So, Kiyani went to the presidency and prime ministers house. The 202 calls were made, but 202 had seen the procession. If you dont give him what he wants, "he will take everything." Nawaz Sharif is in Muridke only. The CJ is inshallah going to be restored. When history will be written about this transformational moment in Pakistan's history, we must remember the GPO 150. Had they stayed at home thinking "what difference can i make," our dark night would not have ended. The people of Pakistan have great passion, you need to show them the way. That is what the GPO 150 did.

I remain ambivalent, and here's why: My biggest gripe is the presence of the PML-N, the PTI and the JI in this movement... the party that physically assaulted the Supreme Court, the cheerleader for the local Taliban and the gang that terrorizes our campuses marched for democracy and the rule of law? Why can't the supporters of the lawyers' movement see the ridiculousness of this? Just now, Hamid Gul, that dyed in the wool democrat, was speaking from Chaudhary's house and commending the army for its "role"... There are those who say that it is the PPP's fault for ditching the lawyers and letting them fall into the hands of the rightwing... I concede that point, but the fact remains that the leading lights in the movement should have kept their movement away from those unsavory creatures, but didn't... how can Aitzaz Ahsan and Asma Jehangir sleep at night knowing that Imran Khan and Hamid Gul are a part and parcel of their movement? Granted, the PPP has handed this victory on a platter to the rightwing, granted that they should never have walked away, granted that they should have honored their promises and reinstated Chaudhary a year ago, but that takes nothing away from the fact that this is primarily a victory for the rightwing... If Aitzaz Ahsan had run this campaign while insisting that Imran, Gul and Qazi Hussain Ahmed had no role in it, and the PML-N would not use it to settle scores, and Imran Khan would not use it to launch himself into the limelight (yet again) and the JI would not use it to launder its filthy past, I would have wholeheartedly supported it... But the presence of these despicable maulvis of all hues in the movement's ranks means I really can't... For what its worth, congratulations to the lawyers and Chaudhary... I hope they realize soon that their allies who used their movement for their own ends are not the sort of people they can or should rely on... and I hope against hope that the PPP stops handing out such opportunities to the rightwing that has emerged united...

"For what its worth, congratulations to the lawyers and Chaudhary" I agree with all of your points but still this victory of Lawyer,s movement is worth a lot. While students, farmers, doctors, teachers etc remain divided , the lawyers have put a consistent united front for the rule of Law, first the dismissal of Justice Iftikhar Muhammad Chaudhary became a catalyst for there movement and from there onwards there was no looking back. No body forgets the history of Nawaz Sharif,s Goons attacking Supreme court, no body forgets that It WAS JI, JUI,MUSLIM LEAGUE (Q) and MQM who delivered the 17th amendment to constitution to legitimize Dicatator Musharraf, the very powers that intoxicated Zardari for a while. No body forgets the role General Gul and other military tinpots played in games with the country, even people will remember Justice Chaudhary,s supreme court giving legitimacy to Musharraf govt at one time( Just like Nawaz Sharif appointed Musharraf as COAS, Musharraf elevated Justice Iftikhar Chaudhary to CJ in 2005). But the truth of matter is that the Lawyers have started something and taken it to finish despite opposition from US of A, PK Military and eastablishment including Zardai and his courtiers. So champaine anyone!

I don't know Akbar... you say no one has forgotten the shenanigans of these parties, but the complete lack of any mention of them and their alliance with the lawyers suggests the complete opposite... if their past antics haven't been forgotten, there must have been at least a semblance of an effort on part of the leading lights in the lawyers' movement to at least keep them at arms' length... instead, it was Nawaz Sharif's march from Lahore to Islamabad that was the focus, and it was he who "called off" the march... I would hate to ruin the party, goodness knows Pakistan needs something, anything, to celebrate, and there is a part of me that is as happy as the next Pakistani, but if these maulvis can march for democracy and rule of law and no one can call their bluff, they will keep taking us for a ride... And I hope when the party is over, I hope we all can reflect on the absurdity of Nawaz Sharif marching for a free judiciary and Imran Khan and Qazi Hussain Ahmed hailing a revolution and Hamid Gul championing democracy... alas, the likelihood of such reflection is as likely as the PPP mending its ways and not handing out these victories on big platters to these maulvis...

No body forgets the history of Nawaz Sharif,s Goons attacking Supreme court, no body forgets that It WAS JI, JUI,MUSLIM LEAGUE (Q) and MQM who delivered the 17th amendment to constitution to legitimize Dicatator Musharraf, the very powers that intoxicated Zardari for a while. And what was so called impartial media doing to inform public about it. I don't believe educated liberals watch Geo's tabloid TV and believe it. Intoxicated Zardari - c'mon you know its his right to have men of his liking at top post and he was blackmailed to change his decision even in great democracies like US President is responsible for such appointments. But my people have short memories and sometimes they are so much full of hatred that they even forgets whats right and whats wrong.

Yes, its good to see the media flex its muscles, and good to see that they refuse to take bans and intimidation lying down, but with great power comes great responsibility... and they have fallen well short of the standards of objectivity that is their primary responsibility... The three major English dailies (Daily Times, Dawn and The News) excluded, the Urdu press and these dime-a-dozen TV channels all have a decidedly rightwing bias... from Lal Masjid to Swat, they have almost served as the cheerleaders for the mullahs... and as Neena asked, how much time did they spend on highlighting the absurdity of PML-N, JI and PTI participating in a movement that was supposedly for a free judiciary? One of these days, they will succeed in foisting Maulvi Imran Khan on our heads, if the frequency of his appearances on TV are anything to go by...

However galling the mantle of moral superiority Nawaz Sharif is attempting to wear here, surely that doesn't mean one could come down on the "side" of the government on this point. At a minimum, Zardari has been guilty of the rankest duplicity.

"Intoxicated Zardari - c'mon you know its his right to have men of his liking at top post and he was blackmailed to change his decision even in great democracies like US President is responsible for such appointments." There is something called Constitution of Pakistan. The appointments of Supreme court and High Court Judges are clearly spelled out in this document. If military dicatators are loathed because they disrespect the Constitution then why should we have a different standard for a civilian president? As of comparing US appointment of Judges to Pakistani president,s appointment of judges, it shows a deep lack of knowledge and understanding of the sordid history of Judicial appointments and judiciary decisions in Pakistan for example the president of his time appoints judges and then judges give the president a right to amend the constitution, I am living in USA since 1993, and have read history of judicial appointments, I have never heard or seen this happening here in recent history. If your argument is bought into that President of Pakistan is right to appoint who so ever he wishes, then we hardly have a case against Zia Ul Haq or Musharraf or other of their predecessors. Neena, I personally do not have any hatred against anybody, and once again any party I ever voted for while I was in Pakistan is PPP(1990s) and that is the party I still sympathise with. Do you think that Raza Rabani, Sherri Rahman, Safdar Abbasi, Naheed Khan( in whose lap Benazir Bhutto took her last breath are all Zardari Haters?.