[This is a guest post by Ashima Duggal. She is an attorney and documentary filmmaker in Boston.]

For more than fifteen years, documentary filmmaker Paromita Vohra has been having large public conversations about everyday political things with Indian audiences. Through her inquisitive, no-boundaries approach to documentary filmmaking, she has encouraged new ways of thinking about a diverse range of questions such as: Who has access to public toilets — and more important, why? How is feminism defined in India? And how does copyright and creation of art coexist? Her films allow viewers to experience, both sensually and cerebrally, the ways in which unseen political and historical currents influence their personal lives. 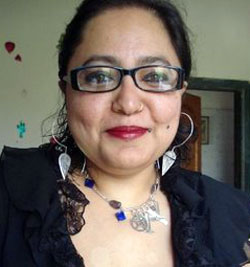 Vohra was not always so confident, however, in connecting the everyday political to the personal. When she first started making films, she was caught in a self-described “hectic political anxiety.” She felt political, but didn't know how to express this amorphous sentiment. So she started a long meditation with herself, exploring “the nature of politics, the nature of film as a medium of political activity and the nature of art.” In a 2012 essay in Pratilipi, an Indian literary journal, Vohra asks two questions: “Do we make films that faithfully illustrate our political position? Or do we use our political position to arrive at an understanding of the nature of life in this moment, which is then the catalyst for creative art?”

A review of her most recent film, Partners in Crime, and a look at two of her other works — Q2P, a film that garnered attention globally, and Connected Hum Tum (“Connected You and I”), a new reality TV show — would suggest that Vohra has taken a slightly divergent path, one that is closer to her second question, and yet is not quite fully accepting of it either. Partners in Crime offers various viewpoints of copyright enforcement and artistic creation in India, and though Vohra's physical and directorial presence is felt in the film, she skillfully avoids using her political position to develop a dominant message. In Q2P, which explores women's access to public toilets in Mumbai, her political position is more evident through her on-screen interactions with her subjects. In this film too, though, Vohra remains curious and casual, and we see her repositioning and refining her stance as the film unfolds. Connected Hum Tum represents a new concept in Indian TVâ€”six eclectic women in Mumbai self-document their daily lives for six months. Vohra's challenge and opportunity lies in building meaningful storylines of the women's daily encounters. Though the women control what is recorded, Vohra's instinctive political sensibilities are reflected in the show's casting and in the creative selection, arrangement, and narration of the women's stories.

A deeper engagement with the partners in art and crime 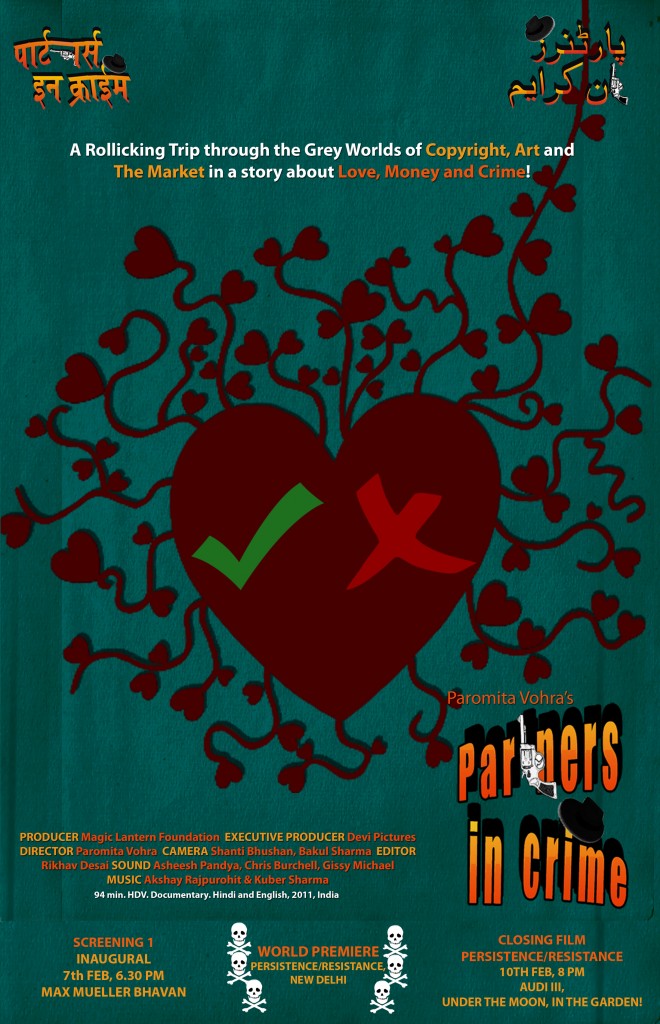 Partners in Crime is built around extemporaneous conversations with a wide cast of characters and easy graphics that visualize various parts of her argument, which is neither against copyright nor for unbridled “copyleft” creativity. The lively and humorous tone of the film makes viewing the ninety-four minutes immensely enjoyable as well.

About fifteen different characters are presented who fall into categories — the infringers, victims, supporters, critics, and enforcers. At first glance, it's tempting to place the characters on either side of a simple moral/legal dichotomy: the corporate executives, driven by profit-making at all costs, are the big, bad villains who use copyright law to enforce their own interests, while the artists are the victims of a kind of cultural appropriation— driven by creative purpose. 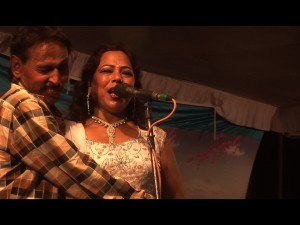 The characters within the film who fit this narrative are many: a successful composer of a 2011 Bollywood hit songâ€”“Munni Badnaam Hui” (“Munni Has Been Defamed”)â€”whose lyrics and composition are clearly derived from nautanki tradition (folk theater) of Uttar Pradesh, a state in north India; another successful music composer whose score for a popular 2011 Bollywood songâ€”“Dil to Bacha Hai” (“The Heart Is but a Child”)â€”sounds eerily similar to French composer Maurice Ravel's orchestral piece “Bolero”; and various American and Indian corporate executives who defend their strict interpretation of copyright laws even while Vohra points out inconsistencies in their own historical record.

Added to this mix are the “pirates,” the individuals who clearly violate copyright law but who seem self-justified and cavalier about it, like most of us who have ever watched a film illegally online. There is the street vendor who sells pirated DVDs with fearless bravado and says, “We are all in this together,” when Vohra asks whether he is afraid of getting caught by the police, and there is the young man who obsessively downloads hundreds of films from bitTorrent claiming that since he pays monthly membership his activity can't be illegal.

But Vohra, dutifully employing the path of deeper engagement, doesn't allow viewers to fall into this simple dichotomy. Her aim is not to label certain stakeholders as clear violators and others as clear victims. Instead, she wishes to “shift the discussion from morality, which is the way the right-wing would want it. And shift the discussion from revolution, which is the way the copyleft people describe it.”

Indeed, the moral/legal dichotomy becomes unsustainable when individual artists are pitted against other artists. In one scene, a small theater troupe who is an ardent fan of Salman Rushdie learn that his agents have rejected their request to adapt a story from his novel, Haroun and the Sea of Stories. In another scene, a young writer, inspired by songs by Rajasthani Meghwals, writes short stories based on their music. By including these situations, Vohra attempts to show that dividing copyright law into clear rights and wrongs is more difficult to do than the strict enforcers would have you believe.

The situations resemble the controversy between Marvin Gaye's estate and Robin Thicke. Marvin Gaye's estate alleges that Thicke's composition “Blurred Lines” is a copy of Gaye's “Got to Give It Up,” while Thicke, in a preemptive lawsuit, argues that the Gaye's estate is claiming ownership of an entire genre. Thicke emphasizes that the only similarity between the two songs is commonplace musical elements. The outcome of this case may very well have consequences in the Indian film and music industry, as more American companies such as Sony, Universal, and Fox are doing business in India, and are aggressively lobbying Indian lawmakers to redefine and enforce Indian copyright laws.

At another point in the film, one of the charactersâ€”ironically, a corporate executiveâ€”says that piracy is a great leveler. The statement alludes to one of the film's fundamental questions: Is piracy a class struggle or organized crime? If piracy is in fact an act of civil disobedience against inequities across the globe, then the pirates can be reimagined on the morality spectrum. The pirates give access to the most popular film, theater, literature, and music to the have-nots, whose limited access is often determined by factors such as which side of the equator they were born on, disposable income, and gender in many countries.

Partners in Crime convincingly ushers viewers to see this viewpoint, opening up the conversation to better understand the various sides of the copyright debateâ€”one that includes the narrow arguments of the enforcers and victims, and the motivations of pirates.

Locating the political in the private: public toilets and the city

Of Vohra's ten documentaries, the most successful in creating public conversations of everyday political things is Q2P, a film about toilets and the global city. In this film, Vohra asks men and woman she meets on the streets of Mumbai questions such as: Why are there not more public toilets for women? Why do the women's toilets sometimes require a fee for use? What would happen if women urinated in the street? These sincere but provocative questions, which frequently elicit embarrassment from the individuals answering them, reveal an opportunity for obvious ethnographic critique. The issues raised in the filmâ€”gender equality, definitions of a global city and remnants of caste discrimination vis-Ã -vis maintenance of public toiletsâ€”are brought into the larger public consciousness through film. Vohra writes in her director's statement:

“As the film observes who has access to toilets and who doesn't, we begin to also see the imagination of gender that underlies the city's shape, the constantly shifting boundaries between public and private space; we learn of small acts of survival that people in the city's bottom half cobble together and quixotic ideas of social change that thrive with mixed results; we hear the silence that surrounds toilets and sense how similar it is to the silence that surrounds inequality.”

Once again, viewers learn about the political realities and histories that exist within overlooked everyday occurrences. Q2P inspired many Indian development activists to focus more attention on building and improving toilets. When it was first released, the film was the basis of a radio survey on toilets in Mumbai and it influenced campaigns like the Right to Pee. The film is also used as a teaching tool in university curriculum around the globe in anthropology, sociology, and architecture courses.

Moving the conversation to the small screen: Connected Hum Tum

Vohra has recently forayed into reality TV in India. Connected Hum Tum, which premiered on June 3, 2013, is a smart series on Zee TVâ€”a popular Indian television channelâ€”that chronicles the lives of six diverse women in Mumbai. Vohra directs, while a talented actor, Abhay Deol, narrates the women's self-documentation efforts, which they accomplish through handheld personal cameras.

Though Vohra's presence and on-screen provocative questions are absent, Connected Hum Tum maintains the progressive, open dialogue emblematic of her style. The cast of the path-breaking show confronts real-life struggles: balancing the roles of wife, daughter, mother, daughter-in-law, and working professional; making a second marriage work after divorce; following one's dreams despite family resistance; and being a LGBT activist in a committed relationship.

The women are complex, conflicted, smart, passionate and driven. Their personal moments of strife and satisfaction are at once their own, and reflective of what many women in modern, urban India experience. And, as in Vohra's films, the show's original viewpoints allow for a more nuanced, deeper conversationâ€”conversation that, we hope, in borrowing from the spirit of Vohra's approach, stimulate a new way of engaging with the everyday political around us.

Partners in Crime is playing at UnionDocs Center for Documentary Art, 322 Union Ave., Brooklyn, NY 11211, on October 27. A post-screening discussion will follow with the director Paromita Vohra; Brian Larkin, Associate Professor and Chair of the Department of Anthropology at Barnard College; and Pooja Rangan, Assistant Professor of Culture and Media at The New School.

Paromita Vohra is an Indian documentary filmmaker and writer based in Mumbai. Vohra has directed ten documentary films; written an award-winning fiction screenplay, “Khamosh Pani” (“Silent Waters”); and has a popular weekly column in a Mumbai newspaper, Mid-Day. She most recently directed Connected Hum Tum, a documentary-style television series about the lives of six women in Mumbai.

Please refer to these websites for more information:

[…] comment on “the politics of 'Razakar memory' in Andhra Pradesh”; a reflection on the “everyday political in Paromita Vohra's documentary films”; and AJK's Shura City. Of all these many excellent guest posts, Prof. Veena Oldenburg's […]