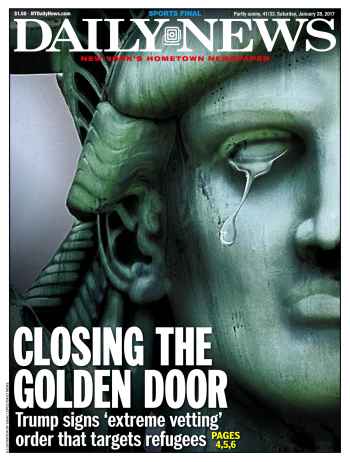 My friends and many thousand strangers to me, are gathered at various airports across United States trying to let strangers in. The strangers, in this particular case in early 2017 America, are Muslims born or affiliated with the un-desirable nations of Iran, Iraq, Syria, Libya, Yemen, Somalia, Sudan. Some 134 million are theoretically barred from this country for 90 days. They are barred pending some 'extreme vetting' that will determine they are ... non-Muslims.

I do not, as a rule, write about my present or past here and this will be no exception suffice to say that perhaps my longest theoretical engagement has been with the question of hospitality in America. As a young immigrant, Emma Lazarus's words "give us your poor" were often, repeatedly, insistently recited to me as indicative of America's putative promise of hospitality. A few years ago when I moved to NYC and started walking bridges, I learned about Lazarus' inspiration for this creed of hospitality, when I visited the National Park on Wards Island. Here is what I read:

The island lay largely abandoned until 1840, when overcrowded Manhattan sought convenient locations for almshouses, mental health facilities, and potter's fields (graveyards for the poor). Hundreds of thousands of bodies were relocated to Wards Island from the Madison Square Park and Bryant Park potter's fields. The State Emigrant Refuge, a hospital for sick and destitute immigrants, opened in 1847 and it was the biggest hospital complex in the world during the 1850s. The predominance of public works led the City to purchase Wards Island outright in 1851. Twelve years later, the New York City Asylum for the Insane opened on the island. From 1860 until the 1892 opening of Ellis Island, Wards Island along with Castle Clinton on Manhattan's southern tip welcomed America's newcomers at its immigration station. The New York State Department of Mental Hygiene took over the immigration and asylum buildings in 1899, opening Manhattan State Hospital. With 4,400 patients, it was the largest psychiatric institution in the world. It later became the Manhattan Psychiatric Center.

Lazarus worked in the immigration center at Wards, where she encountered sick and destitute applicants for entry-- detained before their cases could be heard. The foreigners stood directly on the re-interred bones of the slaves and poor of New York. Where they stood, would then stand, those termed insane and deviant.

What is Wards Island to the memory of American hospitality? When Lazarus's poem about "Mother of Exiles" was inscribed on the "Statue of Liberty" it erased the memory of this island of exiles.

Derrida in his lectures on hospitality (1996) gave a working definition that has always stayed with me: "No hospitality, in the classic sense, without sovereignty of oneself over one's home, but since there is also no hospitality without finitude, sovereignty can only be exercised by filtering, choosing, and thus by excluding and doing violence. Injustice, a certain injustice, and even a certain perjury, begins right away, from the very threshold of the right to hospitality." This is fundamentally correct. American hospitality-- that which is motivating the thousands of protesters against Trump's Executive Order-- is defined precisely by its exclusions. One need only ask Frederick Douglass, W.E.B. DuBois, Malcolm X, James Baldwin to re-narrate the filtering of the black life out of America.

The foreigner now asking for hospitality's promise has little purchase. The law is not an ally. The law has banned them-- as Chinese, as Japanese, as Indian, as Jew-- many times in the past and will do so again, legally, when they are Muslims. The law is the same law that legally bombed the foreigner's homes and legally rendered them to Black Sites and legally droned their habitat and legally sanctioned their economies and deported them.

A few weeks ago I re-entered JFK from my trip to Lahore. As a permanent resident, Pakistani male, Muslim, I am always taken to secondary screening and this time was no exception. Along with me were a number of other brown men and women-- including a very young student whose F1 was being questioned. I was let ago before I saw what happened to him but all signs were bad. I believe he was Iraqi.

"I ask no monument, proud and high, To arrest the gaze of passers-by; All that my yearning spirit craves, Is bury me not in a land of slaves" -Frances Harper