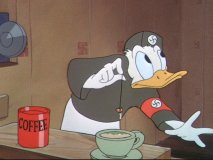 Disney released its wartime propoganda films on DVD. Like all other industries, during the Great War, the Movie Studios turned themselves over to the Pentagon for the war efforts (hey, we got a Great Communicator out of it). Disney was perhaps the most effective of all wartime propoganda machines. These shorts have not been released since the end of the war, and I don't know why Eisner is releasing them now. They are patriotic, duh, and also figure gross carcicatures of the enemy, both Jap and Nazi. Disney's talents were considered essential in the war effort as was their talent in making evil, evil:

None do so more viciously than the aforementioned Der FuehrerÃ”Ã¸Î©s Face (which imagines Donald Duck as a swastika-bedecked Nazi manufacturing munitions while heiling Hitler about every other second) and the somber Education for Death (the biography of a blond German boy who devolves from wide-eyed innocent to Hitler Youth to a graveyard). In both films, Japanese are portrayed as green-skinned fops and Germans function as little better than human bulldogs.

While, this war is getting bogged down in pesky "torture" issues. It's good to buy for your children stories of a war where evil was truly evil and good, well, cartoonishly good.