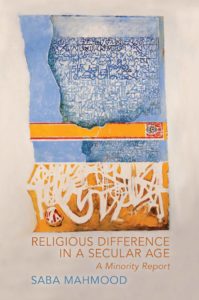 [We are excited to host this conversation on a very important book, Religious Difference in a Secular Age: A Minority Report, by Professor Saba Mahmood. The CM Roundtable is a series that presents multiple, in-depth reviews of an exciting new book. We thank each of our distinguished panelists for engaging in this public dialogue. We aim to have each roundtable available as a single beautifully produced e-book available at the conclusion— for classroom or referential usage.]

Professor Durba Mitra is a historian of gender and sexuality at Harvard University.

This interdisciplinary discussion of Saba Mahmood's latest book, Religious Difference in a Secular Age: A Minority Report (Princeton: Princeton University Press, 2016) highlights the significance of Mahmood's work for diverse audiences. It was assembled to speak to the broad interdisciplinary impact of Mahmood's scholarship--- which has been the subject of much scholarly debate and has had an impressive reach across disciplinary and geographic divides. The roundtable features Professor Schirin Amir-Moazami (FU Berlin), a political theorist working on questions of gender and diversity in contemporary Europe, Assistant Professor Sarah Eltantawi (Evergreen State College), a scholar of religion specializing in North Africa, and Professor Humeira Iqtidar (King's College, London), a political scientist who specializes in Islam in South Asia. By way of introduction to this roundtable on Religious Difference in a Secular Age, I want to think about Mahmood's recent work through her larger body of scholarship and take a moment to situate Religious Difference in recent debates about secularism, law, and gendered power.

In her introduction to Religious Difference in a Secular Age, Mahmood argues: "The secular, in other words, is not the natural bedrock from which religion emerges...it is itself a historical product with specific epistemological, political, and moral entailments" (3). In her first book, The Politics of Piety (2005), as well as the widely cited May 2001 Cultural Anthropology article, "Feminist Theory, Embodiment, and the Docile Agent," Mahmood argues against reductive critiques of Muslim women's agency and the inadequacies of the normative subject of feminist theory to comprehend women's lives in the context of postcolonial Egypt.

Mahmood provocatively confronts the "culture" problem that vexes feminist theory. She argues for a feminist methodology that takes into account the possibility of desire, self-making, and embodiment in movements and subjecthoods that so often bring unease to moralist understandings of agency in transnational feminist politics. Mahmood instead argues for a feminist project suspicious of liberal, and liberatory, promises of a staunchly secular feminism. Mahmood made this argument at a critical time, at the inception of the War on Terror in 2001, which deftly utilized the language of secular liberty to claim that religiosity was oppositional to the cause of women and national liberation (for example, in Afghanistan).

It was Mahmood's critical gaze at this transformative historical juncture--- the complications it posed for theory as well as for liberal and left political movements--- that has provoked scholars across disciplines and geographies to read and debate loaded concepts like "custom", "agency", and "freedom" for our contemporary world. Mahmood emphasized the methodological power of the embodied concept of piety, now a key idea for what has become essential reading in a range of curriculum, from anthropology to women's, gender, and queer studies. As scholars continue to theorize the problem of agency and the illiberal subject, one might rephrase the central problematic in Mahmood's Religious Difference in a Secular Age to engage these questions again, a decade and a half after her seminal 2001 article. What if "the secular" was not the "natural bedrock from which" feminism emerges?

For scholars of women, gender, and sexuality, Mahmood's Religious Difference in a Secular Age offers comparative histories and concepts that have defined the construction of law, gendered power, and social and sexual difference across the modern world. In the context of postcolonial India, Mahmood's study offers critical comparative insights for ongoing debates about the function of customary civil laws that govern family, property, and social regulation in India. For example, in the recently decided "Triple Talaq" case, the All Indian Muslim Personal Law Board argued in opposition to the legal challenge that posed triple talaq (Muslim divorce initiated by the husband proclaiming thrice out loud "talaq") as unconstitutional for failing to provide equal protection under the law. The judgment against triple talaq has been hailed as a victory by people across the political spectrum in India. Yet the text of two majority opinions of the judgment, and the minority dissenting opinion which argued that triple talaq was integral to "Sunni Islam," point to continuity in a contradictory form of legal reasoning that poses "religion" in opposition to secular equality and rights. The deciding vote in the Triple Talaq case by Justice Kurian Joseph, which argued that instant talaq-e-bidat was against Shariat, complicates the dichotomy that poses Shariat and secular state law in opposition to one another.

Thinking with Mahmood's theorization, scholars should not only engage the historical and epistemic features of particularist legal structures of personal or "customary" law. They must also attend to the ways in which often exclusionary majoritarian visions of normative social life are essential to the very constitution and politicization of secular law. Mahmood's work provides critical tools to approach debates about personal law versus the uniform civil codes, and the way secular legal claims have been used by the Modi government to claim a reformist position against "archaic traditions" of "Islam." As Mahmood's Religious Difference demonstrates, this strategic claim to secular law has redefined the way that majoritarian, often deeply violent anti-minority political groups claim the liberation of religious minorities through the legal assessment of the social life of minorities. Majoritarian claims to the liberation of Muslim women through secular law ignore the many innovations and reforms done within religious legal structures, how often failure to gain maintenance for women is sustained by ill-informed lawyers, as well as how women's rights have been achieved by Muslim women through other legal structures with more nuanced views to the workings of law on the ground.

Mahmood's larger body of work also proves essential for theorizing contradictory reactions of women on the effectiveness of personal law, and for thinking about issues of embodiment, agency, and extra-legality that shape women's everyday engagement with personal law, not only in state courts, but also in other important sites of community-state adjudication. Mahmood's framework builds on this central question: what are the possible drawbacks of a uniform civil code based in ideals of secularism, when secularism is so often used by majoritarian groups punitively against minorities to assert authority over social life?

What Mahmood offers in Religious Difference are concepts that must continue to be central concerns to a new generation of feminist and queer scholars across geographic bounds. How might we think the divide between public and private, foundational across feminist and queer thought, as necessarily constituted through the dichotomy of political secularism and religion that organizes our social and political worlds? In Religious Difference, we see the question of the private shaping the very contours of a majoritarian secularism that seeks to not only regulate, but also assess the "liberation" of social practice by marking religious life as private, social, sexual, and in need of regulation. For Mahmood, secularism's claim to freedom as well as its mandate for regulation are simultaneous and intimately linked.

To theorize the public and the private, in any context--- from the impact of customary laws across the postcolonial world to seemingly secular institutions in US and Europe--- means a necessary engagement with the ways that majoritarian claims to secularism define the terms of the public/private devide. As Mahmood shows, secularism not only defines majoritarian ideals as an ethical ideal and political norm, but enshrines a select few with the power to diagnose, judge, and declare those "other" structures of social life as ahistorical and illiberal. Mahmood emphasizes that to critique secularism is not to condemn it, but rather, to "deprive it of innocence," to better engage the question of religious difference in the contemporary world.

In a 1994 review, "Islamism and Fundamentalism", Mahmood, then a graduate student at Stanford University, pointed out that secularism is "rarely problematized as a universal ideal" in contemporary scholarship which described the practices of vast numbers of people through the reductive concept of fundamentalism. I find this review to be a demonstration of the critical power of Mahmood's scholarship. Mahmood has always interrogated how the liberatory promises of secularism are themselves built on a system of faith, where secularism continues to be declared fair and, in its purest form, always just, despite the spectacular failures of the lived reality of secularism in the postcolonial world (and very clearly in the US and Europe). As she succinctly declared in her review: "The experience of modernity...has rarely been one of 'tolerance, civility, and reason' for a large number of people around the world." It is through this analytic --- where the contradiction of secular ideals with lived experience reveal the paradoxes held within secularism itself --- that we are provoked to ask anew about the power of normative values and the lives that inhabit, and exceed, these structures of knowledge.

The scholars featured in this roundtable situate and critique the work from diverse sites, from an engagement with the exceptional status of Muslim immigrants in Germany to the unique particularities of Egypt's Coptic Christians to theoretical questions about ethical norms. These responses are but a few of the different avenues with which to think Saba Mahmood's Religious Difference in a Secular Age.

[…] …Mahmood has always interrogated how the liberatory promises of secularism are themselves built on a system of faith, where secularism continues to be declared fair and, in its purest form, always just, despite the spectacular failures of the lived reality of secularism in the postcolonial world (and very clearly in the US and Europe). As she succinctly declared in her review: “The experience of modernityâ€¦has rarely been one of 'tolerance, civility, and reason' for a large number of people around the world.” More here. […]