Locas and Palomar, the incomparable works of Gilbert and Jaime Hernandez, a.k.a. Los Bros Hernandez, are my new favorite graphic novels. The comics of Los Bros feature a shocking, original and excellently drawn cast of curvaceous, sassy and powerful Latina women in stories that portray, by turns, the intimate details of every day life, and fantastical tales of science fiction and the supernatural.

Most of the comics of Los Bros were first published in their Love & Rockets comic books over the past twenty years. Now two enormous collected volumes have come out chronicling the exploits of some of their main characters: Jaime Hernandez' Locas, and Gilbert Hernandez' Palomar. Locas takes place in a Latino neighborhood called Hoppers, in a town that is possibly Oxnard, California (homeland of Los Bros).

The stories in Locas follow the adventures of a group of unruly Latina punk rockers, particularly the two members of a best friends and sometimes lesbian couple Maggie (a spaceship and robot mechanic) and Hopey (a punk rock bassist and recovering graffiti tagger). Palomar is the name of a fictional Latin American village. The Palomar stories follow the lives of a vast cast of characters, with the central figures being mostly loud-mouthed, promiscuous and powerful women, particularly the very busty baÃ±adora/mayor, Luba, and the hard as nails sheriff/midwife Chelo.

Los Bros describe themselves in their bios and interviews as growing up in a household in which comics and cartoons were considered just as serious as fine art. They cite the work of many cartoonists as influential, such as Gasoline Alley, the Archie series and the work of R. Crumb, and all those influences are easy to detect in their work. What makes these guys so spectacular is the way they have freely plundered from their favorites and paid clear homage to the old masters of cartooning, while simultaneously creating work that is totally and completely original, unpredictable and distinctive. You could say that the Palomar stories are Gasoline Alley meets Li'l Abner meets Archie meets R. Crumb meets G.G. MÃ¡rquez, but just trying to imagine that combination would probably make your head explode.

As an example, this panel below depicts a scene in which Luba goes out dancing with Archie, a mortician.

The wide panel captures a variety of side characters and casual greetings and asides, as the striking couple enters a nightclub. In a particularly direct homage to the Archie comics, an acquaintance calls out to Archie, "Ese Archie! Is that Betty or Veronica?" Another man responds with a classic Archie comics chuckle, "HYUK!" Such references, both direct and subtle, appear throughout the comics of Los Bros.

'High art' references abound as well. In Palomar, a character tries to convince his wife, who is jealous of his reading all the time and not paying attention to her, that One Hundred Years of Solitude is an important book: "All right then, SeÃ±or Book Worm!" She says, "Tell me what's so great about it!" "Really?" He replies, "Well, I don't know where to begin! There's so much....It's about us, Carmen. It's about our lives, uh...well, not our lives, but....ok, this: 'Rebeca Buendía got up one morning when she learned that Aureliano would be shot. She stayed in the bedroom in the dark watching the cemetery wall through the half-opened window as the bed on which she sat shook with JosÃ© Arcadio's snoring." "If you say so, sweetheart" his wife replies, losing interest.

Both Gilbert and Jaime Hernandez periodically like to inject one another's characters into their work-- not as elements of the plot but simply as bystanders. 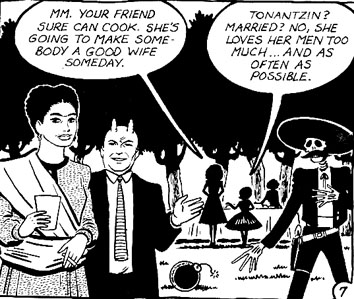 In one party scene in Palomar, the action of a particular panel is carried out in silhouette in the background, while HR Costigan, a character from Locas (who looks like a space alien and is the mysterious millionaire husband of the character Penny Century), and the artist Frida Kahlo mill about at the town picnic in the foreground (Gilbert has also written a comic book biography of Frida Kahlo in Love & Rockets Vol. 9: Flies On The Ceiling). In Locas, Luba and other characters periodically saunter through scenes in which they play no part. In Hernandez Satyricon, issue #15 of their Love and Rockets comic book series that comes chronologically after the material collected in Palomar and Locas, this practice is taken to the extreme, with entire strips drawn using one another's characters.

The world of Locas is quite different from the world of Palomar. Though Locas starts off with many elements of science fiction and super-hero comics, Jaime Hernandez maintains a consistent homebase for the characters in Hoppers, where life is more realistic. Jaime gradually moves away from the fantastical and science fiction plots and focuses on the relationships between the main characters. In the earlier stories, such as first installment of the series, Mechanics, both worlds are present, with Maggie writing letters home to her girls in Hoppers detailing her exploits with spaceships. The scenes of action and adventure in South American are occasionally interupted by scenes of the locas, her friends, reading the letters to one another, as in this elaborate drawing of Maggie's friends driving around town. 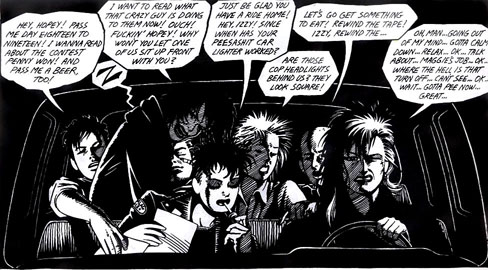 Jaime Hernandez' drawings are more stylized than Gilbert's, and his design of scenes from panel to panel is innovative and arresting. Gilbert's strips are more straightforward, and his characters slightly more ragged around the edges. Jaime's lines are cleaner and the debt to both Archie comics and great newspaper strips such as Dick Tracy and Brenda Starr is quite clear in the stylized realization of his characters. 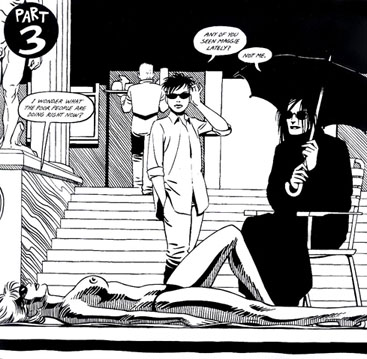 At the same time, it is startling to see some of the classic Archie techniques used to create the lesbian punk rocker Hopey or the depressed Latina poet Izzy Ortiz, as in this panel featuring Penny Century (sunbathing), Hopey (standing) and Izzy (holding an umbrella). 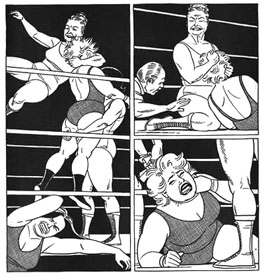 The stories of Los Bros are feminist to the extreme, so much so that the worlds of Locas and Palomar can't even recollect or comprehend any kind of alternate reality in which the men may have been in charge of things. In the town of Palomar, the women have jobs like mayor, sheriff and sportswear manufacturer; the men have jobs like accordion teacher, mortician and prostitute. The men in Locas trail about after the heroines, longing for them pathetically, not sure if they will even consider dating a man. Most of the men are loungers and barflies who drive around town yelling things out their car windows. By contrast the women occupy all the most interesting professions, with an increasing amount of attention paid to the world of women's wrestling, of which Maggie's aunt is a reigning champion. Though in the beginning of Locas, all the women are drawn in the shapely Betty and Veronica mold, Maggie soon begins to gain weight at a steady rate, and this becomes a recurring theme in the plot and conversations, as she 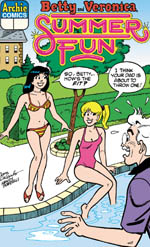 finds it harder to fit into her clothes and the neighborhood boys try to decide if she is still as attractive as she used to be (answer: yes). In Palomar, a variety of women's bodies are also depicted, many idealized and Barbie-like, yet still subject to the effects of the aging process. In one of the more interesting body sub-plots, Luba, who from the beginning has been drawn with exaggerated female attributes, begins to talk later in the strips about the discomforts of having grotesquely large breasts, especially as she bears numerous children and gains weight as she grows older.

Los Bros are clearly self-aware about the tension between their impulses to draw their female characters as idealized male fantasies and also as realistic women.

In one short strip in the Hernandez Satyricon called "The Artist," Gilbert Hernandez, depicts himself as fantasizing about being considered a serious artist. "Perhaps if I draw in a more neo-primitive style I'll get more attention as a serious artist!" He says to himself as he draws a comic in the first panel, in which he draws himself with a muscular super-hero physic, while several unrealistic characters wander around in the background. In the second panel, the artist and two of the characters are transformed into strange, willowy neo-primitive figures with large fish-like eyes. "Hey! We like us better this way!" cries out the first character; "Thanks!" says Gilbert; "Yeah, no giant boobs, no sexist exaggeration, no childish fetishism," remarks the other character. But the honeymoon is soon over when the characters realize that he's Mexican and one runs off, while the other one remarks kindly, "Oh, but you're one of the 'good' ones."

Not only do Los Bros inject moments of self-awareness into their comics, but their characters become periodically aware of their creators and their own presence in a comic strip, at times growing annoyed or even violent toward Los Bros, and at others, marveling at their virtuosity. In the climactic final scene of Mechanics, the first chapter of Locas, Maggie is airlifted off an island being swallowed up by the sea where she has been working with a team of mechanics to fix a spaceship which is lodged on top of a dinosaur. "Wow! That's the stuff comics are made of!" Exclaims one of the characters, looking out of the helicopter at the scene below. "Eek! Somebody turn the page! You can see my panties!" Screams Maggie.

This is really good - I've read about but never read the Love & Rockets series, and this is a really good overview of the books. Is there a good place to start?

i started on heartbreak soup. i have now read the lot and its still my fave XD ... jealous!! that u hav not read lol