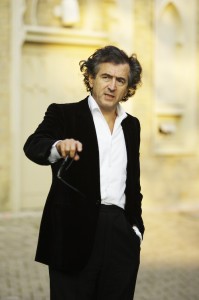 How is it that it would not occur to a learned person that the theoretical school of Botulism was a hoax?

Le Figaro had an article titled "BHL, the most loathed dandy in France" a week ago. He was always a lightweight, more likely to be found on a television set than a scholarly conference, but since 9/11, he seems to have undergone some sort of radical neocon epiphany, along with his far more serious cohort Alain Finkielkraut. It used to be said of him that "thanks to BHL, Mrs Michu, concierge at Aubervilliers, 'gets' Kant". I guess not so much.

I love the idea that a disgruntled research assistant planted that thing in his book, like a flaming bag of dogshit on the doorstep, and that they're watching in the bushes trying to keep their giggles under wraps.

Couldn't have happened to a nicer triple-barrel-initial'd public intellectual. VDH might come close, but BHL has a certain oily Francophone sheen that can't be beat.

man, this guy is to philosophers what new age is to religion: shallow, pseudo-intelligent, and commerical