Aryn Baker, in one of the most egregious example of bad reporting/analysis/pull-it-outta-your-ass-telology, quotes some "mild-mannered scholar" who yearns for the return of the Mughal Empire. What the fuck is Institute of Policy Studies, Islamabad? How do you even find these numskulls? More importantly what is this Deobandi v Aligarh match that has been going on for the last 130 years - defying all other histories? Then there was someone named Reena Ninan waxing eloquently about "our 9/11" on FOX News. Which, to the anchor, meant only that India must now act like US did (given the usual suspects, so far):

Here is Dalrymple chiding the Indian government for "continu[ing] to make matters worse by its ill-treatment of the people of Kashmir, which has handed to the jihadis an entire generation of educated, angry middle-class Muslims." Is that really so? Let's assume that these perpetrators are angry about Kashmir. Lots are. Hundreds. Thousands. Hundreds of thousands, even. Maybe, they are all Muslims as well. Maybe, devout, even. And yet, the injustice of Kashmir over the last 60 years seems to have not turned the lot into kamikaze fire-spewing terrorists. Why is that? Are Indian Muslims willing to kill all other citizens of their own land, Muslims included, because of 60 year old grievance? And they chose now why? More consequently, how is the manufacturing of this particular dissent made possible in Pakistan? Dalrymple plays up the ISI but nary a word on the role which the conflict of Kashmir has played in the self-construction of the state of Pakistan? Is that impolitic? Will we be embarrassed to learn of the deeds of Zia ul-Haq and Pervez Musharraf? Why is ISI some monolithic mind-controlling entity that has "imposed" Kashmir as an Issue? On Kashmir, he states blithely that "the state should logically have gone to Pakistan". And what logic would that be? The logic of Partition?

Or you may prefer the Fareed Zakaria model, where Indian Muslims are waiting patiently to be infected by this virus which is the enemy of "modernity and democracy." Are you kidding me?

Even the more benign defense against profiling Indian Muslims seems to irk me. Is the analogue between state-sponsored terrorism? Or a face-off of atrocities? What exactly is the goal, here? Justification?

Biju Mathew, at the very least, makes sense when he calls into question this well-rehearsed charade that we have been playing since 2001:

The official story that has already begun to emerge is one that may have some facts embedded in it. But we must remember that between every two facts is a lot of conjecture. The conjectures that unite the few facts (16 gunmen, AK47s, grenades, passports of multiple nationalities, boats on which at least some of them arrived, a dead Anti-Terror Squad (ATS) chief, Hemant Karkare, who was heading the investigation against the Hindu Right wings' terror campaign, the gunmen trying to identify British and American citizens) makes the story. The story then is as much a product of the conjecture as it is of the facts. And there are certain stories that we are already oriented towards. The conjectures that create that story - the story we are already prepared for - is the one the State will dole out for our consumption. Already the conjectures that will serve the State, are out there in great profusion.

I remember December 2001 and the armies which stationed themselves along borders. In everything I have read, and heard, over the last few days, nothing gives me hope that we are not hurtling towards a repeat. And here we have distinguished commentary that refuses to abandon the script. 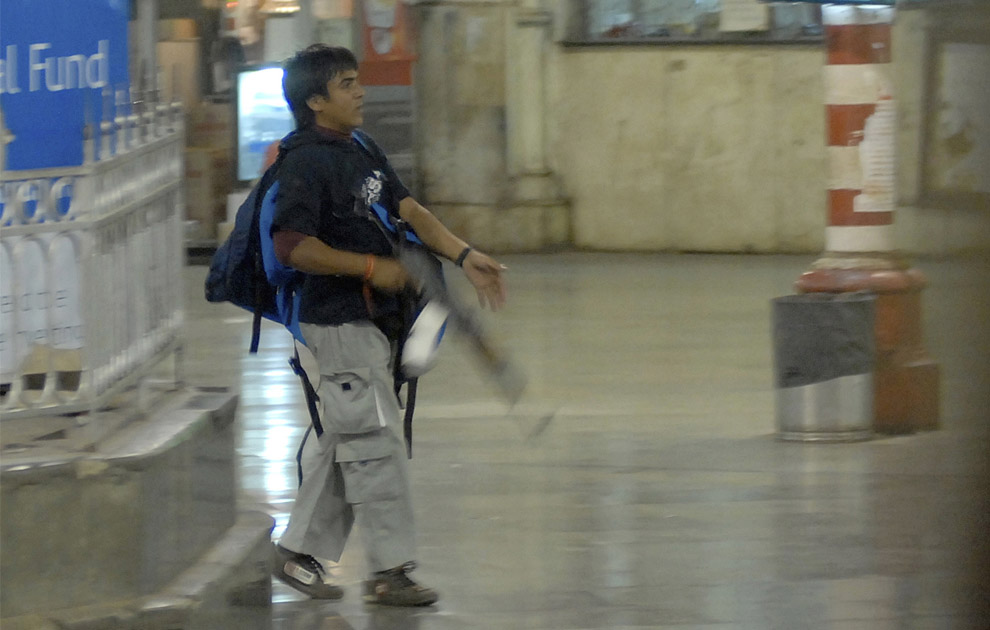 That last line is going to haunt me for a while. There is a sort of psychopathology involved in terrorism which is very much of a piece with our particularly American (so far) self-destructive suicide-homicide-rage-fame incidents. You cited something earlier about ties to criminal organizations. That seems to make some sense -- more so that most of the other blathering out there -- but it hasn't gotten much traction. Is new evidence actually available yet, or are we still in limbo?

On the Dawood Ibrahim connection, some reporting is coming out: http://www.chapatimystery.com/archives/1042197.html and http://www.guardian.co.uk/commentisfree/2008/dec/01/comment-and-debate-misha-glenny Too early to say anything, of course.

I posted a comment complimenting you on the aesthetically designed website. Think it got lost somehow. So posting again. Please read the opinion piece I posted on my blog as well. Would be good to hear your opinion on it. Regards, Proloy

[...] Sepoy, at Chapati Mystery, questions the experts in the Western press: Then there was someone named Reena Ninan waxing eloquently about “our 9/11? on FOX News. Which, to the anchor, meant only that India must now act like US did (given the usual suspects, so far): [...]

So, what is your conjecture on this? A genuine and earnest question from someone who is confused by this, and who is willing to believe that the act was perpetrated by Islamists, but who doesn't understand certain things (reports that the guys drank beers at Leopold bar; the Versace shirt etc, the involvement of Dawood). I don't understand the hints you drop and don't know how to connect your liked and disliked articles to one another, since my knowledge about Pakistan is not thick or deep. What do you think could have happened?

laleh: I am just as much a consumer of media as you are, so my ideas about what happened are none the wiser than anyone else. The Indian officials seem very convinced that LeT was behind this, that some coordination happened from Pakistan. The Pakistani officials are less sure. The Pakistani media seems to blame RAW and MOSSAD. I am more interested in these narratives _about_ the incident - which was the focus of the Bombay Attacked series. Explicitly, how the story of these attackers and their motives was built up WITHOUT a whole lot of known facts. It was all known unknowns, as Rummy would say. If you are genuinely interested in my thoughts on what could have happened, I too can play the conjecture game. I think that in the annals of terror-making, there is something new here. These attackers did not try to create "maximum damage", they had no big bombs strapped and they didn't drive trucks into Taj (as they did at Islamabad Marriott). There were a lot of them, and they seemed to have wanted to kill in a variety of places. So the question is: what was the objective, first of all. Machine gunning people is a pretty crude tactic at this developed stage of global terror. That certainly raises questions about, whether or not, this operation was touched by al-Qaeda (My guess is not). Secondly, who were they? Were they foreigners? Did they just train in PK? Answers there are very important before we can go any further. Lastly, what was their propaganda? I think, this, gives us some hints as to why they didn't just drive a huge truck into the Taj and blow it up. They wanted to sustain not only the killing but their exposure to the media. Which again, hints that operationally these were not internationally known folks. They were trying to create a new mythos or maybe just a local narrative. Frankly, thats about as far as I can go. LeT, as a group and its history, are certainly imbricated in provoking Pakistan/India into military stand-offs. With that reading, I think Ahmed Rashid has the best analysis so far of what could have happened: http://news.bbc.co.uk/2/hi/south_asia/7764475.stm I hope this helps.

the institute of policy studies is, I believe, the pro-establishment think tank that Shireen Mazari is associated with. It's basically an extremely right-wing, anti-Indian, islamist bunch of apologists for the ISI.