Initial word makes it that Lashkar-e Tayiba, who have previously been suspects in the Oct. 2005 Delhi serial blasts and the July 2006 train blasts, is responsible for this atrocity. 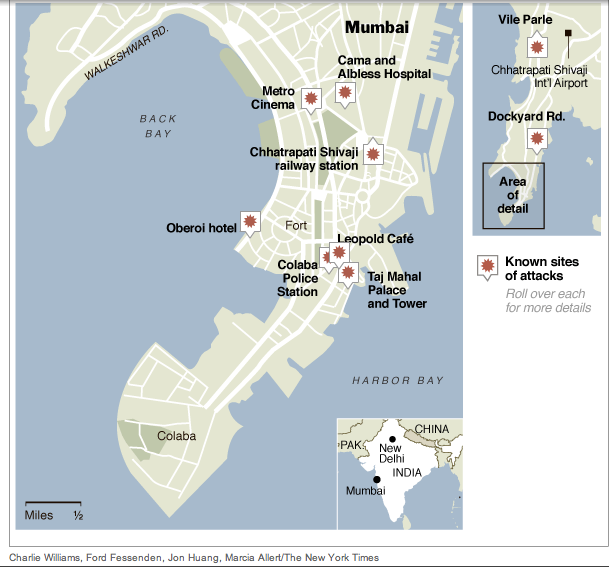 This is a terrible atrocity and the perpetrators and their supporters must be relentlessly hunted down. Unfortunately, the Indian state is very rickety and inefficient and this weakness means that there is a very real threat that Hindu fascists will take advantage of the situation. The Indian state must increase its ability to defend itself against terrorism, otherwise India's great opportunity to rise to greatness will be lost and instead we will get chaos and civil war.

unfortunately India is surrounded with partially failed societies with confused cultures and one autocratic, communist country . The only other country facing this geographical and political challenge is Israel . but unlike Israel , India has adopted a liberal system ,where some section have taken advantage . No one can predict these attacks , from USA, Spain and England every one has faced this challenge. after ideological confusion of communism, the Islamic fundamentalism is the new challenge of modern world .

Where has all teh humanity disappeared to? why have people become like this? where are the humans of this world?? May Allah make things better for the world. Heal the world, make it a better place for you and for me and the entire human race...heal the world!

I think any inquiry should start with some simple questions 1) Who benefits? 2)Is Pakistani eastablishment involved? Assumption one; Pak eastablishment is rational, in that case why open a new front when already being targeted by NATO/US on the western front? Assumption two; Pak eastablishment is irrational/suicidal, in that case why are they partners in global war on terrorism? If USA/INDIA with all there budget in intelligence and might cannot control these fanatics, then how one expects a Pak eastablishment which is irrational/incompetent on verge of bankrupcy to control these fanatics.? 3) Where is the region headed with all this? Also see Why the Attacks in India Should Surprise Nobody http://www.commondreams.org/view/2008/11/27-10 The Assault on Mumbai By TARIQ ALI http://www.counterpunch.org/

lets look at some knowns and them guess at the unknowns. 1. Obviously, Pakistan is going to be blamed in some way for having organized and trained these terrorists (or their initial mother organizations) in the first place. Some people in Pakistan will complain that the US itself started this monster in Afghanistan, but that will not buy them any sympathy. Whatever role the US played, Pakistan's "intelligence" services (what an ironic term) picked up that ball and ran with it. Now, this is their baby and everyone else expects them to do something about it. 2. IF the current pakistani government goes out of its way to cooperate and IF there is no direct link between current ISI officers and this particular operation, they can avoid serious sanctions, but they will face an even more aggressive Islamist revolt within Pakistan as this kind of cooperation with the infidel forces will go beyond just Afghanistan (which is bad enough in the eyes of the Islamists) but will strike at the very heart of the whole jihadi operation in Pakistan. People like Hafiz Saeed and Maulana Azhar may have to be shut down. Azhar is already outside the official loop, but until now the military has protected Hafiz Saeed and his LET operation (presumably by convincing the Americans that these are Kashmir specific terrorists and that protecting them is a red line that the Pak army cannot cross, etc etc) but this may no longer be tenable. 3. Pakistan will probably have to give up Daud Ibrahim. given his longtime links with the ISI, my guess is that if he is still in Pakistan he will be handed over dead rather than alive. 4. IF the operation was arranged via BD, then BD will also have to take action against the Islamists there. Again, the Americans and Indians are actually easier to satisfy than the jihdadis. The military regime may face an islamist revolt similar to the one the Pak army is already facing. I will stick my neck out with predictions: 1. Pakistan and BD will promise to cooperate and actually WILL take action against Jihadis and underworld networks they have hitherto sheltered or even assisted. 2. In exchange for this cooperation, they will get more money and no serious sanctions will be applied on them by either India or the US led coalition. Some cosmetic sabre rattling will no doubt take place. But good sense will prevail. 3. The jihadis will be in a state of open war not only with all the infidel nations, but also with the current regimes in Pakistan and BD. 4. India will survive this crisis and if they can control the impulse to kill a few thousand innocent Muslims, they will actually emerge stronger because this will lead to some serious reorganization of their extremely primitive and inept security services. 5. BD will probably survive an uptick of violence there as well. 6. Pakistan will be the biggest loser. If they cooperate with the international community, the jihadi insurgency will accelerate and the jihadist section of the establishment will fight a messy rearguard action against the pragmatists who will cooperate with the anti-jihadist powers. If they dont cooperate, they will be alternately pressured and cajoled by the US and its friends and while immediate consequences may not be bloody, the long term damage to Pakistan as a member of the international community will be very severe. 7. If Pakistan does not cooperate, this WILL make things harder for India. Their establishment is as corrupt and inept as ours and the pressure to do something will overwhelm their good sense....in that case, we may take them down with us....I do think this is the LESS likely scenario. I am an optimist.

If one can look the result of attacks can get the people behind it 1 First advantage of these attacks to involve India in war on terror because the next target of USA and Israel is Pakistan and India have to give something in return to USA for giving Nuclear Deal. India is being promised like Afghanies in war against RUSSIA. 2 India wants to hide about 70 thousand army send to Afghanistan. 3 To stop the Kashmir Freedom movement because international comunity was seriously taking notice now. 4 Final to hide about terror attacks in Pakistan which were guided from Afghanistan. Now all Sucide Bombers and technology used are coming from Afghanistan and International terrorism have increased since USA arrived in this region. Who is terrorist ?